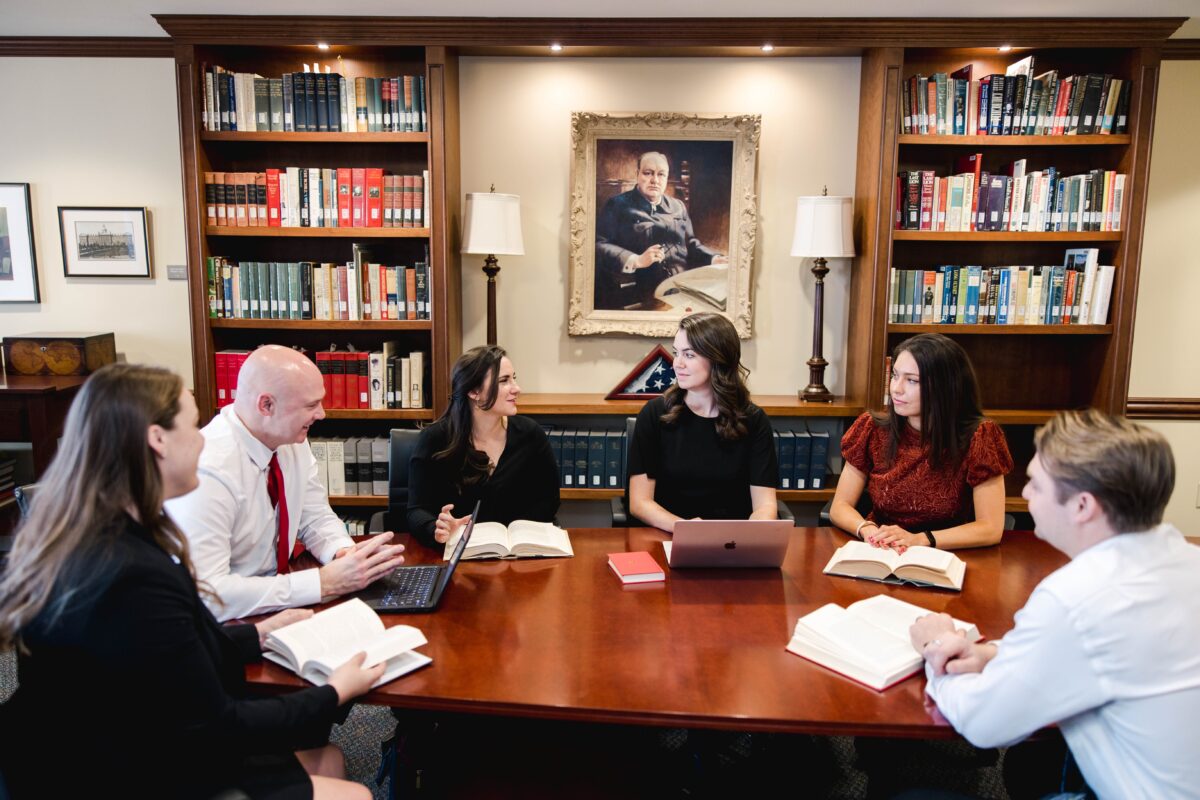 The graduate program allows students to complete degrees at their own pace. (Courtesy of The Kirby Center)
American Essence

A Unique Program at Hillsdale College Nurtures a New Generation of Public Servants, Based on America’s Founding Principles

A profound understanding of politics and thought
BY Krista Thomas TIMEJuly 9, 2022 PRINT

“Father of the Constitution” and fourth President of the United States James Madison once stated, “A well-instructed people alone can be permanently a free people.”

And a well-instructed people is exactly what Dr. Matthew Spalding envisioned when he took the helm as Dean of the Steve and Amy Van Andel Graduate School of Government. Here, students seek serious study based at the very seat of policy-making in the United States: Washington, D.C.

What draws these driven professionals to classes in the evenings and on weekends? Student after student says it’s the scholarly and intellectual reputation of the flagship institution, Hillsdale College. The D.C. campus opened in 2010 near Union Station on Capitol Hill as the Allen P. Kirby, Jr. Center for Constitutional Studies and Citizenship. Since then, thousands have embraced various programming that instills a deeper understanding of America’s constitutional roots.

According to Dr. Spalding, this new graduate school, situated in the heart of the nation’s capital, teaches instruction with “an avowed purpose to essentially offer a much older and more profound understanding of politics and thought in America.”

He proposes to engage professionals in the authentic, intellectual pursuit of America’s founding principles. In fact, the very original source documents that George Washington, Thomas Jefferson, and James Madison read unite students to the fundamentals of the Constitution and its principles. It’s the kind of graduate school devoted to the civic and religious liberty that America was founded on.

“We wanted to do something different, something consistent with the Hillsdale College teaching mission,” Dr. Spalding explained. “We really are trying to give a complete and proper understanding of politics with moral and intellectual grounding. The whole establishment of a Washington, D.C., campus is really an outward activity of Hillsdale College—to shape, restore, and revive the principles of the country which can reshape how we think of the education of its citizens.”

Political thought, literature from Aristotle to Shakespeare, American history, and statesmanship courses are incorporated into a core curriculum that makes up 36 credit hours. Though challenging, credits are earned through courses offered on weekday evenings or as learning weekends. It’s ideal for working professionals who labor as government staffers, analysts, lawmakers, media professionals, attorneys, and policy experts.

He believes that many great people live and work on Capitol Hill who are not going to leave for a graduate degree elsewhere. Because the program is designed for nighttime and weekends, students can study and graduate in 2–3 years at their own pace. Unlike other institutions, courses are designed to teach how to be excellent statesmen, to become great thinkers like Churchill and George Washington.

“I love politics, but the essence of politics is the understanding of deep principles. The way you do that in the American regime is by studying Lincoln, Washington, and other great statesmen—and the Constitution. Hillsdale has that understanding already; so to build that core idea in the heart of the nation’s capital is to create a unique program for working professionals,” he stated.

Dr. Spalding’s own professional acumen consists in scholarly work and study grounded in the Constitution and American history. And his wife is a graduate of Hillsdale College. It was Larry P. Arnn, President of Hillsdale College, who convinced him to participate in the grand vision of building the Washington, D.C., campus and, subsequently, create the graduate school. His expansive leadership role as Vice President for Washington Operations also requires him to oversee all operations and educational programs.

“At that point in my career, I wanted to shift to the most important thing and create this unique program which is this graduate school,” he added.

In May 2022, the first working scholars earned their Master’s degrees in government after completing many intense semesters of intellectual exceptionalism based on the principles of freedom, liberty, classical politics, and America’s founding documents. With a liberal arts understanding of the Western tradition, graduates are able to defend American constitutionalism in the public square.

Joshua Holdenried wasn’t interested in a graduate program for credentials. He said it was clear that Hillsdale’s School of Government would provide an in-depth education.

“I craved intellectual formation. It was clear that only Hillsdale could provide a thorough understanding of statesmanship and governing from tradition that has historical respect and accuracy to the Founding Fathers’ vision.”

Holdenried currently serves as Vice President and Executive Director of Napa Legal. Though determined to muscle his way through the program, the recent graduate was impressed by how accommodating the program was for balancing work and life commitments.

“You can’t actually be a student unless you are a full-time working professional. With a baby, time is limited as a parent, executive, spouse, and student. But they were great to work with to figure out a schedule that works for my schedule to complete the program and graduate,” he said.

“We should care about the actual education you get. Hillsdale’s School of Government is an accredited program where you dive deep into relevant texts, Socratic discussions with classmates. This focus on religious liberty and a proper understanding of church and state made me a better thinker and communicator.”

Armed with a new graduate degree, he is determined to advocate harder for organizations facing activists set on eroding freedoms. Holdenried assists religious nonprofits in working as better, smarter nonprofits. From tax compliance to operating within the law, he helps executives and staff fulfill their apostolic mission and ensure liberty protections as sophisticated organizations in the public square.

His time at the Hillsdale Washington campus connected him to his peers, a cross-section of working professionals spanning governmental agencies, advocacy organizations, and policy-focused nonprofits.

“A healthy amount of folks working on Capitol Hill admire the program,” he said. “It’s a diverse group of people working in government or outside of government who teach or take classes.” In other words, it is common for a chief of staff or senator or congressional member to take part in the graduate mission of the Graduate School of Government.

Holdenried admits the program is highly selective but for good reason.

“Because they are investing in you, unlike other institutions in which you pay for the diploma. Thankfully, through the generosity of donors, I was offered a full tuition scholarship. I knew that Hillsdale’s education was what I wanted. I wanted it more than the credential itself.”

Steve Van Andel, for whom the graduate school is named, is a graduate of Hillsdale and on the college’s board of directors. His gift of endowment for graduate scholarships and graduate school operations makes it possible for students to study in this unique program and continue to work without the worry of financing the education.

The role of a great education in statesmanship cannot be overstated. The value of a Hillsdale education through the School of Government, he added, is that you understand, appreciate, and then apply the principles of statesmanship, whereas other programs do not necessarily accomplish this.

Holdenried, like other graduates of Hillsdale’s educational formation, are so appreciative as former students that the next students are often recruited by the graduates themselves. Who then was the first person Holdenried recruited for studies at the Graduate School of Government? His senior counsel.

And the adventure of forming well-instructed people in authentic governing arts proves to be a cascading blessing for Dr. Spalding and for America.