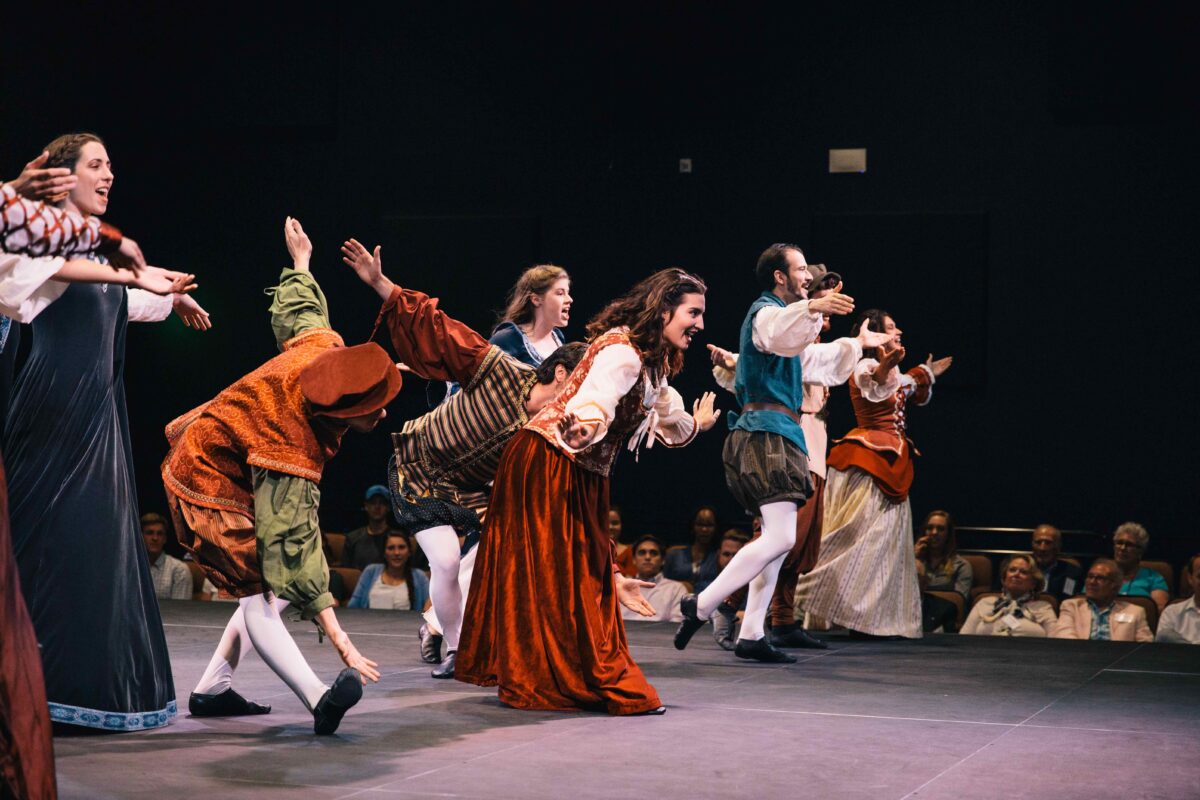 All the world's a stage for students at a Florida university program that focuses on The Bard's plays
BY Krista Thomas TIMEAugust 18, 2022 PRINT

After school one day, a gregarious and confident sixth-grade student named Travis Curtright told his mother about his plans to be a stand-up comedian. In a way, his dream came to fruition, for professionally he draws out the comedic genius of William Shakespeare as the Director of Shakespeare in Performance at Ave Maria University.

It all began in 2012 when Dr. Curtright taught a course featuring Shakespeare’s plays at the university. With professional training from the American Shakespeare Center and Chicago’s The Second City, he naturally shared his love of literature and acting with students. “I would stage student interpretations of various scenes or soliloquies or some part of the play’s action. Students loved the freedom and experimental nature of exploring plays this way and asked me to direct them in a production, and that’s how this all began in 2012,” said Dr. Curtright, who earned a doctorate in Literature from the University of Dallas.

Over the next 10 years, what evolved from these popular courses developed into the Shakespeare in Performance program—an undergraduate minor like no other. Here, students can simply take classes or earn a minor under his scholarship. Every play is performed by a troupe of students with limited or no experience. And semester after semester, students line up to perform under his tutelage.

His productions at the Donahue Family Black Box Theater, built in 2019, are one of the cooperative and collaborative efforts.

Though many young men and women have made their entrances and exits over his many productions throughout the years, Dr. C., as students call him, appreciates what makes great art and consequently shares this with students.

“Great art should change us. Shakespeare’s art is no exception. Truly superb or fresh performances of ‘As You Like It’ or ‘Hamlet,’ in one sense, can be thought of as ways of expanding the human spirit and becoming better versions of ourselves,” he reflected.

Dr. Curtright believes that Shakespeare’s brilliantly written plays, language, and characters provide “mighty tools of thought for examining life—and to perform Shakespeare especially means sharing in and learning his amazing articulacy, and this alone is a tremendously empowering thing,” he stated.

“Most of all,” he added, “Shakespeare demands active engagement. His works need us in the sense that we must supply what his plays, by modern standards, strangely lack.”

His successful teaching philosophy calls for active engagement. That is, students determine what is not present in the text, which encourages thespians to create space on the stage for the imagination and invention—without sets and with house lights up. What seems like improv leads to comedic relief or an aspect that dives deep into character development.

“There is a marriage proposal from the Duke to Isabella at the end of ‘Measure for Measure,’ but how should her response be staged? What elements of Hamlet’s feigned madness appear genuine, if any? In ‘Much Ado about Nothing,’ should we infer that Benedick and Beatrice have had a romantic relationship before the action of the play begins? Students answer these questions by trying out different versions of soliloquies and exchanges between characters, but the plays themselves demand such attention from directors, actors, and indeed all readers.”

Dr. Curtright’s style of production and educational mission through the Shakespeare in Performance program speaks to what success can look like on a college campus. For 10 years, performances from Shakespeare’s original plays were reworked in a relatable way. William Shakespeare made adjustments from sources, borrowed plots, made up characters from those plots, and created language that would speak to the era and region in which he lived: Elizabethan England.

“Though the language remains largely the same, I rework plays into scripts for today’s audiences and for young actors to grow. From the artistic side, shows are creative works and unique precisely because of the particular personalities in the troupe and how we work together to shape the direction of a production. But Shakespeare’s plays can be thought of as a living art form and a profound means of human development at the same time.”

Each semester, thespians find an education outside of the academic rubrics at Ave Maria University. Sharing his craft with students in an engaging way is what defines a truly gifted professor. With every new character, new show, new scene, and new actors, Dr. Curtright finds the experience gratifying. And so do his novice thespians.

“Most if not all students are new to a thrust stage and some have never acted before. With that said, acting skills may be developed. Students perform with the lights up and without sets in order to put them in the foreground in a more heightened way. They also directly address audience members,” Dr. Curtright said.

“This kind of theatrical presentation imparts a healthy sense of risk-taking behavior and teaches them how to show poise in company,” he added. “Students learn how to center their bodies in public spaces, to speak up and stand up straight, how to be comfortable with eye contact, and in all of this, they become more open to the world and to those around them.”

For Dr. Curtright’s former troupe members who venture out into the world to their next big adventures, he says his graduates have successfully found work in hospitality, radio, teaching, business, and marketing. Others have expanded upon their education with careers in dental and law and, of course, theater.

“What many report is how they learned verbal and so-called ‘soft skills’ during their time here and how these have helped them after graduation. So, they mention how acting cultivates soft skills like emotional intelligence, communication skills, self-awareness, and even an ability for learning new things and for doing cooperative creative work. Speaking well and listening attentively to others, it turns out, matters for establishing relationships on stage and in the workplace,” stated Dr. Curtright.

That could also be said of former student Robert Gotschall, a native of Alpharetta, Georgia, who transferred to Ave Maria University with no intention of acting. And he had no experience in acting whatsoever.

On a campus tour in 2013, Gotschall met Dr. Curtright, who asked if he had any interest in taking part in this Shakespeare performance class. When Gotschall arrived on campus, he signed up and learned rather quickly that Dr. Curtright takes his craft very seriously.

“He is the one who hooked me onto the idea that an artist can be a force for good in the universe. When you make art, it ought to be directed to a force for good because it brings people closer to God,” Gotschall said.

The experience of acting, especially with Dr. Curtright’s guidance, was for Gotschall an opportunity to create something magnetic on stage and through stories. Though most happy on stage performing and bringing people joy, Gotschall found himself very much drawn to the storytelling aspect, acting on stage, and entertaining people.

“Dr. C. inspired confidence within me. I discovered that I enjoy it and I’m good at it,” he added, noting that he went on to graduate with an MFA from Mary Baldwin University and finding work professionally to hone and share his learned craft.

Dr. Curtright believes that Shakespeare in Performance is life-changing for all involved.

“They were transformed and changed by acting Shakespeare—those moments when they first internalized Shakespeare’s words and spoke them as if they were their own. What happens when students improve in their technique is that they come to understand how they should and deserve to be seen and heard, and this is a beautiful lesson in self-efficacy or self-empowerment,” added Dr. Curtright.

Such empowerment is how Gotschall grew into the craft. The experience in Shakespeare in Performance helped him to see the good in people, to find what makes each person unique.

His gift for listening to people is one of the greatest traits an actor can possess.

Following in Dr. Curtright’s footsteps, Gotschall finds much to emulate.
“He is a loving, kind, and God-fearing man who knows how to draw out the good and the joy in people,” Gotschall said of Dr. Curtright. “He listens to people and meets them where they are. Truly, he is good at what people need and he adapts to that.”

Modernizing Shakespeare on the stage continues to drive adaptations that the community thoroughly enjoys and supports—and students yearn for semester after semester. If Dr. Curtright is asked which is his favorite Shakespeare play, he would answer with immediate satisfaction and glee: “The one I’m currently working on, of course!”