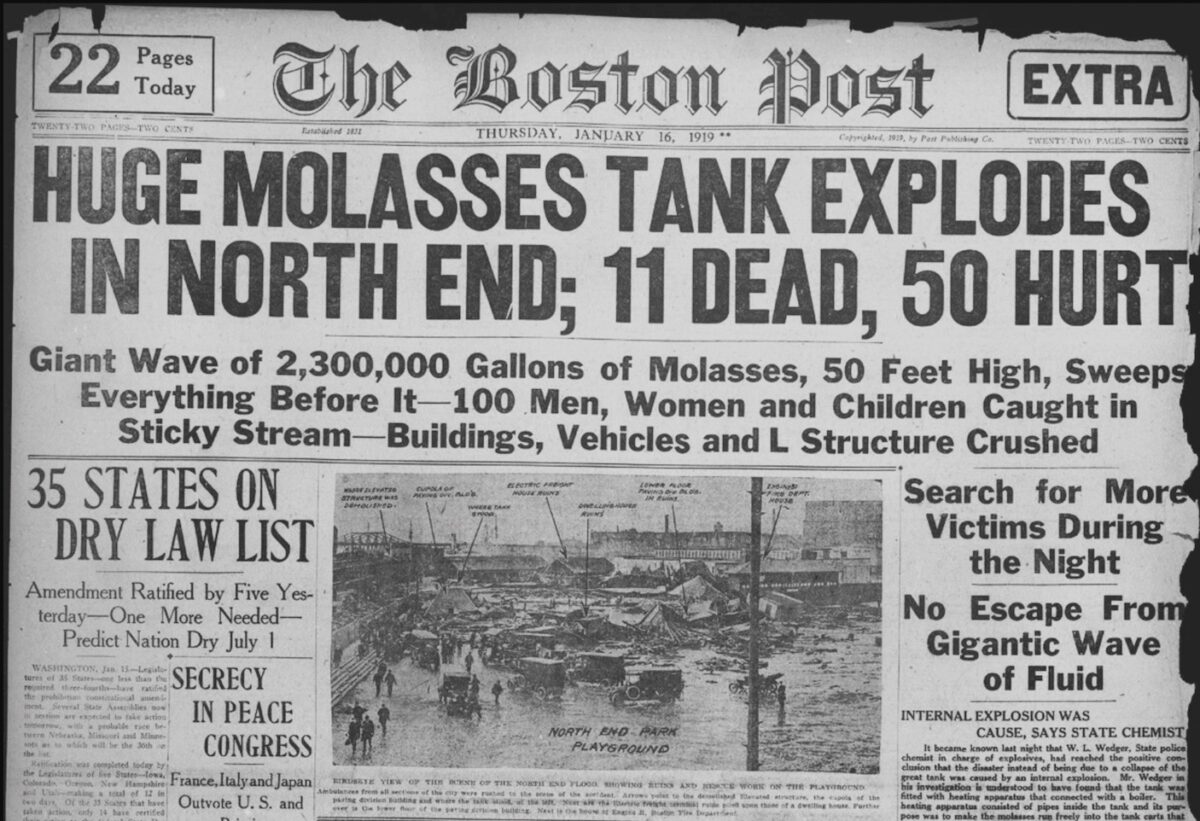 A Tragedy Forgotten: A 1919 Boston Molasses Tank Explosion That Caused Death and Destruction

An exploding storage tank filled with the sweet and gooey stuff propelled a wave of death and destruction in Boston’s North End in early 1919
BY Debi DeSilver TIMEApril 12, 2022 PRINT

“Send all available rescue vehicles and personnel immediately,” Boston Police Patrolman Frank McManus managed to relay to dispatch through the call box located on the North End near the harbor. A bizarre tragedy was unfolding before his eyes and momentarily left him speechless. “There’s a wave of molasses coming down Commercial Street.”

As the policeman began his routine midday report, he heard a sound resembling the rat-tat-tat of a machine gun. He had no way of knowing it was rivets popping from the seams of the giant, 50-foot-high and 90-foot-wide molasses tank holding more than 2 million gallons of the dark, sweet, syrupy liquid. When the tank burst, it set in motion a black tidal wave that was 160 feet wide and reported to be anywhere from 15 to 40 feet tall.

Prior to that January 15, 1919, day in Boston, the weather had been bitterly cold but warmed considerably to around 40 degrees. The North End, where the United States Industrial Alcohol Company (USIA) had built the holding tank, was a densely populated mix of homes and businesses. Just 150 feet away stood the Fireboat Engine 31 Firehouse, where several of the crew were enjoying their usual lunchtime card game of whist.

Cards had just hit the table for another hand when the six men in the room reported hearing a tremendous crashing noise. One man described the sound to a Boston Globe news reporter as that of a roaring surf and another said it sounded like a runaway horse team smashing through a fence. “Oh my God!” shouted one of the men who had just looked out the window. “Run!”

“Molasses, waist deep, covered the street and swirled and bubbled about the wreckage,” reported the local newspaper the next day. “Here and there struggled a form—whether it was animal or human being was impossible to tell. Only an upheaval, a thrashing about in the sticky mass, showed where any life was. … Horses died like so many flies on sticky fly paper. The more they struggled, the deeper in the mess they were ensnared. Human beings—men and women—suffered likewise.”

Death and a Multitude of Injuries

Twenty-one people died and at least 150 more were injured. The men at Engine 31 Firehouse didn’t have enough time to run for the fireboat and escape the sticky 26-million-pound tidal wave by water; however, only one casualty at the station was reported after their brick building was knocked from its foundation and the interior structural supports were damaged. A firefighter was pinned by the debris and drowned in the pool of molasses.

Patrolman McManus fortuitously escaped any injuries, although he was about 100 feet from the molasses tank. “I felt some wet, sticky substance strike me about the shoulders,” he told a local news reporter gathering first-person accounts of the tragedy. He first thought it was mud and then saw the steel tank fall.

Rescue workers arrived quickly from the Haymarket Relief Station, which was an extension of the Boston City Hospital located about a half mile from the waterfront. Removal of the hardening molasses from victims’ mouths and noses so they could breathe was top priority. In addition to the nurses, police, and firefighters from the relief station, over 100 cadets from the USS Nantucket training ship docked in the harbor were among the first on the scene. Army personnel and volunteers from the Red Cross soon joined in the rescue. It was a superhuman effort of ordinary people in their daily walk of life trying to save lives of ordinary people trapped in a horrific tragedy during their daily walk of life.

“No prominent people were killed in the molasses flood,” author Stephen Puleo wrote in his 2003 book “Dark Tide,” a comprehensive history of the molasses disaster. “The survivors did not go on to become famous; they were mostly immigrants and city workers who returned to their workday lives, recovered from injuries, and provided for their families.”

Among those who couldn’t be saved were two unrelated schoolchildren—a boy, Pasquale Iantosca, and a girl, Maria Distasio—both 10 years old, who were walking home from school at noon for lunch and gathering wood near the tank when it exploded. A North End businessman, Martin Clougherty, lost his 65-year-old mother, Bridget, when the home she shared with her three adult children was swept into a downed railroad trestle, which had been elevated over the district. Sadly, the tragedy happened on the very day Martin was meeting with his accountant to confirm he had saved enough money to move his mother and siblings from the dense area of homes and businesses to someplace quieter and nicer. In addition to Pasquale, Maria, and Bridget, 18 other people also died in the tragedy.

The Clougherty family had all been together in different parts of the house when it splintered after hitting the downed trestle. The three adult children survived, although Martin’s brother was injured and died at a later date; he wasn’t counted among the initial fatalities. Martin was immersed in the molasses after being dumped from his home but managed to break the surface and ride the wave until he found his footing. Standing chest-deep in the sticky syrup, he waded through the molasses to a bed frame and heaved himself up on the makeshift raft. A hand caught his eye, and he pulled the body aboard and helped clear the substance from his sister’s face, saving her life. The multitude of injuries included many workers from the City of Boston North Paving Wharf. They had been sitting outside on the mild day eating lunch when the brown tide suddenly and unexpectedly arrived. The search for bodies and recovery effort went on for months as the sweet smell of molasses remained in the North End.

Lives were saved first, and questions surrounding blame and liability were asked later. Concern surrounding the durability and safety of the giant steel molasses tank towering high above the lives of the North End had been voiced since the structure was built in 1915 by the Purity Distilling Company, a subsidiary of USIA.

Molasses could be distilled for a variety of uses, and demand was high during World War I (1914–18) for America and its allies; the sweet substance was a major ingredient in military ammunition such as dynamite and other munitions. Industrial alcohol was needed to produce cordite, which is a smokeless powder used in artillery shells.

Reports indicated that the tank had been built hastily under pressure to meet a deadline that would otherwise cost the company a fortune in lost sales. The employee overseeing the project was in such a rush for completion that he didn’t have the final product tested with water for leaks. Syrup dripped from at least a dozen spots, allowing children in the area to use sticks and buckets to collect sweet treats. Finally, the company painted the tank brown so the leaks weren’t easily seen.

Another byproduct of distilled molasses that piqued USIA’s interest was industrial alcohol. With armistice bringing a close to the Great War in November of 1918 and passage of Prohibition looming in early 1919, USIA wanted to store enough molasses to profit in the alcohol industry before the anti-alcohol act dried up the country. The North End tank was filled to capacity—about 2.3 million gallons—in order to make a profitable transition from munition sales to alcohol sales. Topping the tank off with warm molasses fresh from the Caribbean, with the cold molasses that had sat in the tank during bitterly cold temperatures, was a recipe contributing to the disaster.

A chemist for the Massachusetts police at the time, W.L. Wedger, blamed the tank’s destruction on an “internal explosion,” reported the Boston Post in the next day’s edition. He believed that the tank of molasses had become heated, which had had the same effect as a gasoline explosion. “That horses were blown about like chips, houses torn asunder, and the heavy section of the Elevated railroad structure smashed like an eggshell are other considerations linked with the conclusions of Mr. Wedger,” reported the local newspaper.

Over 125 lawsuits were filed, which took the courts about six years to sort through and settle. USIA company attorneys cried sabotage and tried to point the blame toward groups of anarchists that had sprung up during the war and supposedly targeted the North End tank to stop the manufacture of munitions. Boston’s Salutation Street police station had been a target of the anarchists, who firebombed the building in December 1916.

Ultimately, the judgment of the court determined that the tank was improperly designed. The failure was due to structural weakness and not a terrorist attack. A settlement of near $1 million (about $14 million or more in today’s dollars) was ordered, and the lawsuits brought attention to the lack of industrial safety standards.

In the end, greed seemed to be the fuse to ignite the trigger behind the deadly explosion of the hastily built and recklessly filled tank.