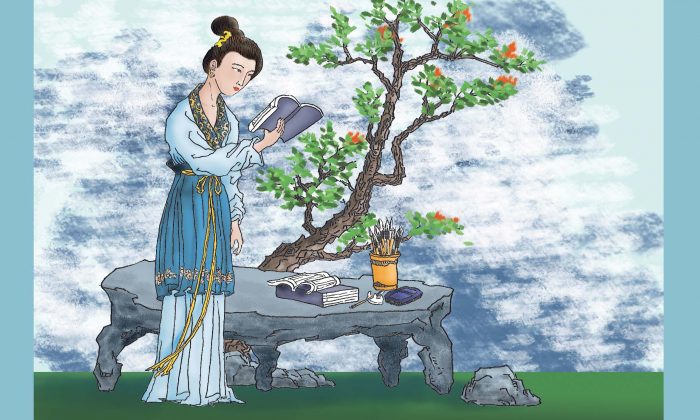 A Thousand-Year-Old Guidebook for Rearing Daughters

Zheng, the wife of the Tang Dynasty official Houmochen Miao, liked to read stories about sages in the ancient days. Every time she read about their righteous deeds, she would lament and feel an urge to write the stories down so that they could be passed down to future generations.

Zheng’s niece was to marry King Yong, Emperor Xuanzong’s sixteenth son. Since her niece grew up staying in the house and was unfamiliar with social etiquette, Zheng compiled a book of historical stories and literary works for her so she could understand filial piety and act with the utmost decorum as a woman. The book was called the “Classic of Filial Piety for Women”.

The “Classic of Filial Piety for Women” has the same structure as the “Classic of Filial Piety” and is written in the form of questions and answers like the “Lessons for Women” between Bao Zhao, alias Venerable Madame Cao (the first known female Chinese historian of the East Han Dynasty, A.D. 45–116), and the daughters in her family. It is a classic written by a woman to educate other women.

There are 18 chapters in the book: objective of compiling the book, concubines, ladies,  lords, commoners, duties and responsibilities towards in-laws, filial piety, virtues, moral values, the five punishments, trust, admonition, prenatal education, being a motherly model, and bad behaviour. Every chapter is concise and to the point.

In the ancient days, rites and rituals were heavy responsibilities of a woman. The book stated that she must oversee them with great care and attention. The attire, words spoken, and behaviour must comply with etiquette and decorum. A dutiful woman will know how to conduct herself and keep the family out of misfortune.

The “Classic of Filial Piety for Women” touches on many aspects, including prenatal education. A foetus is able to feel and sense the benevolence and evil in the outside world through the mother.

Ancient China was very particular about how an expectant mother should behave during pregnancy. She should not to lie on her side, sit near the edge, stand on one leg, or eat food that tasted weird. She should not eat food that was not properly cut, sit on slanted mats, look at awful colours, listen to bad music, or carry inauspicious things in her hands. At night, she should read essays and poems, and during the day, she should talk about etiquette and music. A child who received such prenatal education would have elegant facial features and possess great talent and virtues.

After compiling the “Classic of Filial Piety for Women”, Zheng presented the book together with a memorial to the emperor. Zheng explained that masculinity and femininity coexist in the universe, and decorum and loyalty are important in order for a marriage to work. People in ancient China talked about the five virtues—benevolence, righteousness, integrity, wisdom, and fidelity. But the virtue that ranked before everything else was filial piety. A benevolent and filial person can move Heaven and Earth and shake spirits and deities. The spirit of filial piety is everywhere.

The “Classic of Filial Piety for Women” is an essential book for teaching daughters.