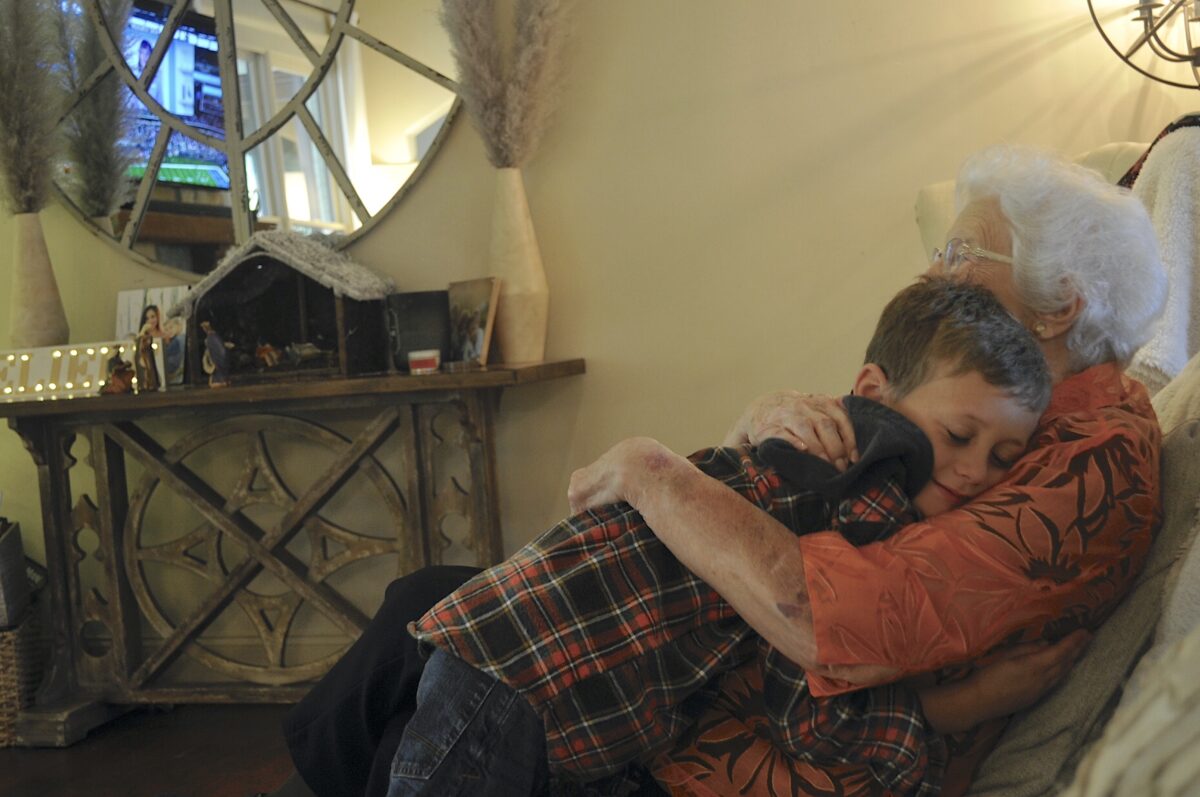 On Thanksgiving Day, A Grieving Family Found Love and Solace in Each Other

In the backyard of the Boyd’s home in Birmingham, the sun beamed, drying up the glistening dew on the grass, bringing warmth to the mildly chilly day. The sky gleamed with that deep purple you only see when the air is clear and cold, and when the V-formations of relentless geese fly overhead toward warmer Southern plains. Nature slowly waking up reminds you of its vehement resilience, its perseverance.

Josh Boyd pocked the turkey deep-frying in a huge cauldron outside. “This turkey should be ready soon,” He said, lifting the huge bird and dunking it back in the boiling oil. A few minutes later, he took the turkey out and set it on a pan to check the internal temperature with a thermometer. “165, this thing is ready,” he hollered.

For Catherine Boyd, this year’s Thanksgiving family gathering was only near perfect. Her uncle, Mickey Welch, passed away from a rare neurological disorder the year before. But for Catherine, it meant the world for her family to gather and celebrate. They did so with that deep knowing they saw in each other’s eyes, smiling despite the dried tears.

“It means everything that my family is here,” Catherine said. “I feel so blessed. We’re not promised tomorrow, and we should cherish every single minute together. Today, we’re even more thankful. It’s a special day, more than ever.”

By noon, the house was packed with four generations of the Tucker-Boyd family, from her grandmother Lila to her children Sawyer, Archer, and Tucker. In the living room, loud conversations flowed comfortably while Catherine and Josh put the finishing touches on the feast.

The Thanksgiving Day bounty this year included a sweet potato soufflé, a decadent cranberry, dried fruit and cranberry concoction, and casseroles of all things yummy. Family members spread throughout the living room and kitchen, chatting and laughing. The kids roamed around showing the adults their magic tricks. A sweet hum resonated in the air amid the happy noise, and the commotion was summed up with one word: Family.
Catherine’s grandmother, Lila, nodded approvingly at the grand-kids playing at her feet.

“It means the world to me that we can all gather and celebrate together, more than I can tell you,” Lila said, as one of the grandchildren begged to show her a magic trick. Four-year-old Tucker hadn’t mastered the disappearing coin trick his brother taught him, and he struggled to make it vanish from his palm. But the 95-year-old matriarch laughed and squeezed him tightly.
Little Tucker frowned. “I know I can make it go away, the quarter, I just don’t know how . . . Wait,” he squeezed his palm then opened it while frowning. “No, it’s still there.”

Lila laughed and reached for her great grandson, but he ran off. “Those little ones are what makes this gathering so special.”
Little Tucker showed his grandmother the magic trick, hoping the quarter would disappear this time. Bobbi watched the little rascal struggle again, hugged him, then beamed while gazing at the hoopla in the living room. Her grandchildren were playing, and her nieces and nephews were setting up the table.

It seemed that the world acknowledged a family coming together.
“Just look around, everyone is enjoying each other,” Bobbi said. “This life we have on this earth is so brief, and we have to appreciate every moment. We used to celebrate Thanksgiving at my house. Everyone came and it was more chaotic than today. My mother and sisters came and we would clean and cook, and cook and clean for days and days. Then everyone gathered and you couldn’t hear yourself talk. It was so joyful.”

Bobbi then peered into the distance, like she just heard a ship-horn on a foggy coast somewhere far away, between land and sea, between happiness and grief.

“Today is for sure different. Today is missing someone. This is the first Thanksgiving since my brother’s loss. You never get over it; you get through it. I miss Mickey every day, he was my hero, and he had more integrity and character than anyone else I ever knew.” She gazed off again, the heavy fog refusing to lift. “His seat is empty this year, but you know what? When something dies, something is born. Now I have his memory, and it’s just wonderful. Priceless. Every time I see the show, Andy Griffith, I smile. He loved that show, which tells you what kind of man he was, honest and full of character. He tried to do everything right, and he pushed all of us to do everything right.”

Josh finished carving the turkey while sneaking in bites and muttering in approval. After Catherine lined up all the serving dishes in the kitchen, the family gathered and held hands to pray. Josh led everyone in a simple prayer of thanks; then it was off to the races! Everyone lined up and filled their plates with mounds and mounds of food. The offerings included the fried turkey, casseroles of every kind, and a bounty of homemade rolls and other delicious goodies. The family headed to a dining room table draped with a white tablecloth and silver candlesticks.

Josh squeezed Lila’s fragile hand next to him. She leaned over and rested her head on his shoulder for a second. Catherine watched smiling. Next to her was Clint Welch, Bobbi’s nephew.

“Today is the first time we all get together since I lost my father,” Clint said. “And since I beat colon cancer a year ago. Today is all about second chances—to be with your family and to celebrate peace, the true meaning of Thanksgiving,” Clint squeezed the hand of his wife, Denise.

Bobbi rested her palm on her nephew’s and gazed at him with love. “Clint spoke at his father’s funeral. It was so wonderful and so true. My brother was the best man in the world,” Bobbi said. Clint returned the hand touch with a knowing nod.

Catherine added, “Mickey’s loss makes me sad, but at the same time, I am grateful we have each other. All of these wonderful people, I don’t want to waste any minute. Funny, it’s like his loss is the glue that’s holding all of us together.”

Bobbi reached for her daughter. “There’s a lot of glue here already.”
After the food, everyone retired to the closest couch. Bobbi gazed at her family with a huge grin. “At the end of the day, family is all that you have.” Then she peered at the purple sky outside, at the geese flying South, at the sun shining and at life persevering.
The fog seemed to be lifting.