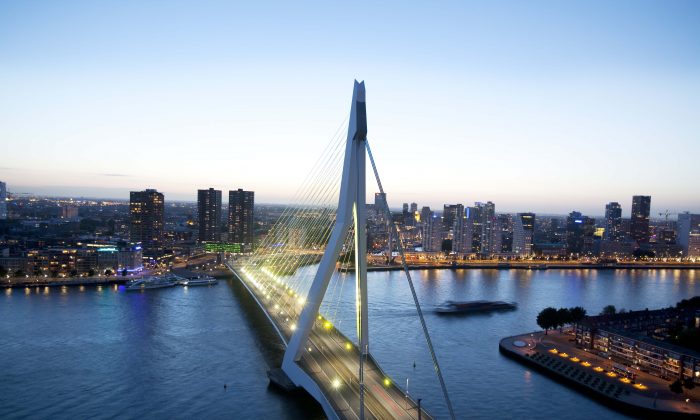 A Tale of Two Dutch Cities

The ubiquitous bicycle is also an incredibly important part of the culture—even to the point that a renovation of Amsterdam’s renowned Rijksmuseum included a bike path.

While in The Netherlands last fall, I visited both the Rijksmuseum and the Hermitage Amsterdam Museum and its Portrait Gallery of the Golden Age exhibition, which in October opened an exhibit of huge portraits—so big that they had to be brought into the exhibition space by crane through the museum’s roof.

Within the limits of modern Rotterdam, you can see the very newest and also the vestiges of the very old.

The Rijksmuseum’s Honour Gallery, of course, is home to an even more colossal work—Rembrandt’s famed “The Night Watch.”

Our guide at Rijksmuseum explained that the intent of the 10-year renovation, which included removing ceilings constructed in the 1950s, was to allow more light into the centre foyer, as Dutch architect Pierre Cuypers had intended.

And yes, thanks to spirited protest, Amsterdam residents can cycle through the museum using a carriageway-like path.

It’s great to see that the cyclists won, as they appear to be king here. Firstly, in a city as old as Amsterdam, it makes eminent sense to get around by bike through the twisting, somewhat narrow streets that make up a city that is basically designed like an onion. Another canal follows each peel of the onion, making exploration—and even getting lost—great fun. And when you get lost, it’s easier to recuperate those lost steps by bike.

Since the intertwining streets and canals of Amsterdam can be a tad puzzling, it makes sense to first take a canal tour. This way, it’s easier to orientate oneself, as tours leave from the Rijksmuseum, a central spot for tourists and locals alike. You float by houseboats and old warehouses; it is beautifully quiet.

The tour allows you to discover an unknown side of Amsterdam—its modern harbour, scattered with huge, futuristic buildings such as the Palace of Justice and EYE, Amsterdam’s film institute.

During my stay, I amused myself by asking locals the meaning of the three crosses on the city flag. Our guide at the Rijksmuseum had translated the three qualities into English as steadfastness, charity, and courage.

Top European designer Marcel Wanders alluded to these qualities when we visited his studio/showroom in De Jordaan, a suburb of Amsterdam, pausing while describing his latest ultra chic projects to praise the masterpieces in the Honour Gallery back in the Rijksmuseum.

“These masterpieces tell us what this country was and is, the humanistic aspect of this country and the city,” he said.

Although in Amsterdam one has to head for the harbour in order to view any large modern buildings, in Rotterdam, large modern buildings are the norm. And because the city was destroyed during World War II, almost all of it has been rebuilt. Still the largest port in Europe and the second largest container port in the world, Rotterdam spreads out along the water. The best way to see it is by water taxi, to get your bearings, and then by bike.

Staying at the Mainport Hotel gave me every chance to get a real feel for the city. Rooms have outstanding views of the harbour and modern apartments seem to shoot out from every corner, on every spit of land. Water taxis land right at the hotel’s pier and whisk one away in a flash. It cost only a few Euros for a ride that would have cost three times as much via taxi, given the limited number of bridges and boulevards that don’t allow for U turns.

Across the ultra modern Erasmus Bridge, I also stayed at the Mainport’s newest competitor, the Hotel Rotterdam. It is located on a spit of land (the Maas) that houses many chic restaurants and includes a few of the remaining historic buildings left in Rotterdam, including the Holland America line from where generations of Europeans left for North America.

A short walk or bike ride away is another bit of land, the Cape, where the Fenix Food Factory has been restored. It is a very homey, down-to-earth market, housed in former warehouses in the centre of Rotterdam’s former red light district.

The New and the Old

Within the limits of modern Rotterdam, you can see the very newest and also the vestiges of the very old.

The newest attraction is the Market Hall (Markthal), a huge, fantastically styled building advertised as the largest indoor market in Holland. After only a month of operation, one million people had already visited this magnificent structure. Think the University of Alberta’s HUB Mall times 300.

This thing is massive, and the interior is even funkier. A panorama of images of supersized fruit and vegetables, called the Horn of Plenty, pour across the ceilings and walls. You may be so bedazzled by the structure that you forget to buy anything. Just in case, try the World of Taste (De Wereld Van Smaak).

Continuing my tour of Rotterdam by bike, I made my way to Delfshaven, a tiny piece of old Holland only 20 minutes away from the ultra modern centre. Here, with an operating windmill within sight, you can visit the original Pilgrim Church, from where Quaker pilgrims made their way to the New World on the Speedwell. In striking contrast, the massive Euro Tower makes up the background cityscape.

I made it to the chicest area of Rotterdam along Witte de Withstraat Road, where stores sport trendy signs, usually in English. “Candy is Dandy, but Licor is Quicker” and “The Difference Between Style and Fashion is Quality”.

Then it was back across the iconic Erasmus Bridge, where, over the long, windy trip, I marvelled at one cyclist, who kept one hand on the handlebars and the other arm draped over the shoulder of his son, who was riding beside him, the entire length of the trip, a good five minutes.

I returned my bike to the front of Hotel nhow Rotterdam, where I was now staying, feeling satisfied with myself, and headed up to my room. The hotel is the newest creation of Dutch architect Rem Koolhaas. He recently stated that he lived in Rotterdam because “it was ugly and boring.”

Oddly enough, I hadn’t noticed that at all.

KLM flies direct from Canada to Amsterdam from Vancouver, Toronto, and Montreal. There’s a shuttle to Montreal for Ottawa passengers.

For bus, tramway, and boat travel in Amsterdam: www.iamsterdam.com

Portrait Gallery of the Golden Age exhibition continues at the Hermitage Amsterdam Museum until Spring, 2015: www.hermitage.nl/en/