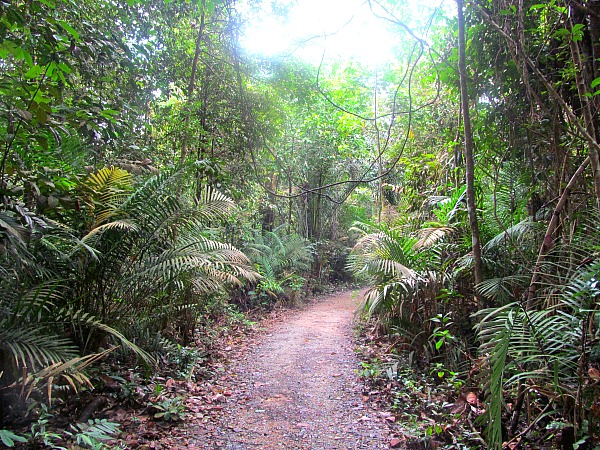 Singapore – the Most Densely Populated Country

Staying in Singapore, perhaps the most densely populated country in the world, is no place for an outdoor adventure. In my three days in Singapore, I found this to be untrue. My first night started with a pleasant river cruise. The next two days were spent exploring Singapore jungles.

My first morning I woke up and was dropped off by my high school friend Lael, with whom I was staying with along with her husband and another high school classmate, Jim. Only a couple of blocks from their beautiful home, I was dropped off at the corner of MacRitchie Reservoir.

Before I got started I had a tasty soup with egg and noodles and bought some fruit juices at the cafe in the park. I also discovered I was a little short on batteries. I walked about a block out of the park and found a Shell station. The nice thing about city jungle trekking is you don’t have to look far for provisions, food, and water.

The end of the loop brings you around the Reservoir (Ted Nelson, Traveling Ted)

Back in the park I began hiking towards the tree top canopy walkway. To my chagrin, I found this to be closed on Mondays. This kind of sucked a little bit, but I still had an amazing day in the jungle. In fact, it may have lead to a more peaceful hike as less people I am sure hike the trails when the canopy walkway is closed.

I walked along the reservoir and immediately saw some monkeys in the grass. It was not be the last I would see. They were along the trail and also in the trees. You are pretty much guaranteed to see a monkey at MacRitchie Reservoir.

The trail is nice and wide and gravel unlike jungle trails in Borneo. Immediately, I was by myself with only an occasional jogger or other hiker coming from the other direction. In between seeing people it was me, the birds, monkeys, and the insects. I could not believe I was in Singapore. All I could see was green. Only occasionally did I see a glimpse of distant buildings when I climbed a tower and also when the trail emerged out of the jungle towards the end along the reservoir.

The highlight was Jelutong Tower since the canopy walkway was closed. From here I saw a couple flocks of parakeets as well as monkeys in the trees. It was interesting being above the monkeys and watching them act like monkeys in the tree tops below. The tower also gave a gorgeous vista over the rest of the jungle, the reservoir, and the city in the distance.

Looking down on the fauna was quite fascinating. Coconut trees spiraled out of the jungle, enormous trees blocked the view of the city, and trees with huge leaves below created an almost Avatar environment. I almost felt like jumping off the tower and let the thick jungle cushion my fall. Instead, I took the stairs down. Again, I was amazed I was in the heart of Singapore.

Besides monkeys, I also saw a few kingfishers, monitor lizards, a few other lizards, some interesting birds I could not identify, and the biggest bad ass ant I have ever seen. This ant was the Arnold Schwarzenegger, the elephant, or perhaps the whale of ants.

I figured I walked between 6 and 10 miles. I headed toward Bukit Timah Reserve and never reached there as I explored other trails along the way before ending the loop back at the reservoir and walking back to my friend’s house. Bukit Timah is right next to MacRitchie, so there is another large green area right next door to explore.

Most of the trails are wide and gravel, but there are various smaller trails that intersect that are fun to explore.

Although much of the trails here are either gravel or boardwalk, it can get kind of rough and rocky in certain stretches. I wore vibrams, and I regretted it. Bring good hiking boots.

Copyright © 2014 by Traveling Ted. This article was written by Ted Nelson and originally published at travelingted.com.