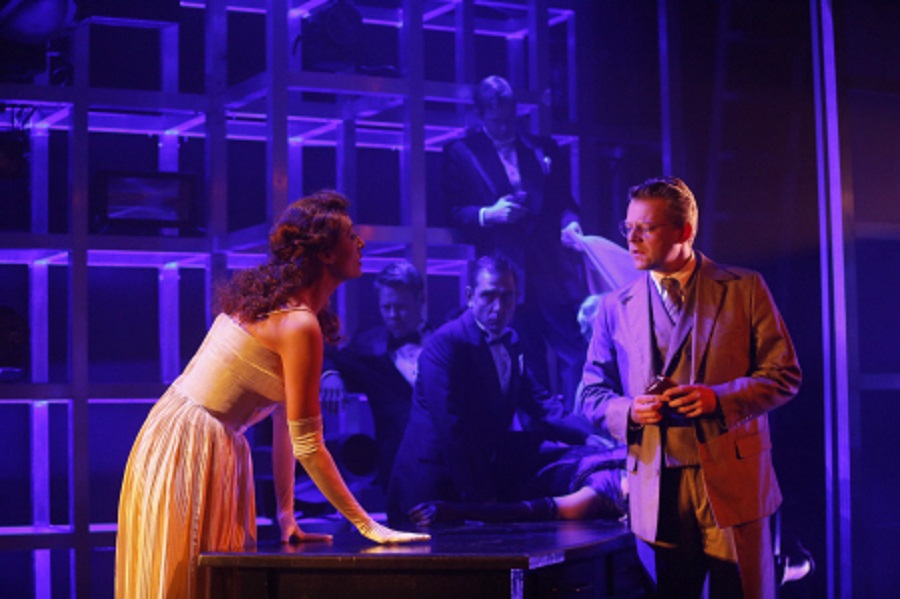 A musical about the development of the A-bomb
Arts & Culture

A Rock Musical about Nuclear Fission

“Atomic” is a new off-Broadway musical about the creation of the first nuclear bomb.

The show has a book and lyrics by Danny Ginges and Gregory Bonsignore, and music and lyrics by Philip Foxman. “Atomic” was first performed in Australia. The New York production has a new cast of top-flight performers but they fail to overcome the flaws of the show.

The Manhattan Project has been the subject of movies (such as “The Beginning or the End” and “Fat Man and Little Boy”) and even an opera (John Adams’ “Dr. Atomic”). Most focus on J. Robert Oppenheimer, who is a character here as well.  However, he is used in “Atomic” mostly as a framing device because the focus is on Leo Szilard. At one point, Oppenheimer says, “If I am the father of the atomic bomb, then Leo is its prodigal son.”

To be fair, the Hungarian physicist (portrayed here by the intense Jeremy Kushnier) was a remarkable figure. (Although usually overlooked in dramatic recreations of the events, he was a central character in the 1989 television movie “Day One.”)

The show starts (and sporadically continues) with Oppenheimer (the versatile Euan Morton, last seen in a jazz revue) testifying before the House of Unamerican Activities. There is also a newly married Japanese couple who are about to die in the Hiroshima explosion. That horrible event is recreated near the end.

Szilard and his wife Trude Weiss (Sara Gettelfinger) were Jewish and when they first appear they express concern over the fate of members of their faith under the Nazis. They had escaped from the Continent to England. When Szilard offers a job to a student of his, the student answers that he is going to work for the Germans. Szilard doesn’t wish him luck.

Szilard comes to America to work with prominent scientist Enrico Fermi. Szilard convinces his former teacher and colleague, Albert Einstein, to write to President Roosevelt to warn him that the Nazis were working on an atomic bomb and this ultimately leads to the Manhattan Project.

The Italian-American Fermi, a Nobel Prize-winning physicist, is treated as a comic buffoon, a womanizer who sings “America Amore.”  Jonathan Hammond plays the role with gusto but it’s ill-conceived and embarrassing. Another attempt at humor comes later in the show when the female workers at the nuclear plant are complaining that they don’t know what they’re working on. They dress like Rosie the Riveter and sing an Andrews Sisters-like number about how they “Put the Holes in the Donuts.”  (Alexis Fishman and Grace Stockdale play various roles and are enjoyable whether singing, dancing or acting.)

By the time the bomb is tested, Germany has surrendered. Szilard learns of the plan to use the weapon against the Japanese. He writes a letter, signed by many prominent scientists, urging the government not to use it against a civilian population. Ultimately, Oppenheimer and Fermi go along with the military option to save the lives of our soldiers, leading to the bombings of Hiroshima and Nagasaki.

Szilard is shown in an impressionistic version of the A-blast murdering the Japanese couple from the beginning of the show, which is a bit of a stretch since he was opposed to the bombing.

Szilard develops cancer and, against the advice of doctors, including his physician wife, he pioneers radiation therapy and cures himself.

Surely, there is a potential for a powerful play (on the order of Michael Frayn’s “Copenhagen”) or even a musical. But the rock score for “Atomic” is only occasionally compelling. And the script sometimes reaches pretty low for a joke. By contrast, John Adams’ opera, “Dr. Atomic” didn’t strike me as completely successful, but at least it aimed high. ” Greg Graham’s choreography was entertaining but Damien Gray’s direction was uneven.  Neil Patel’s metallic set meets his usual high standards.