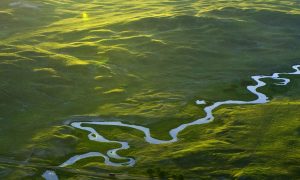 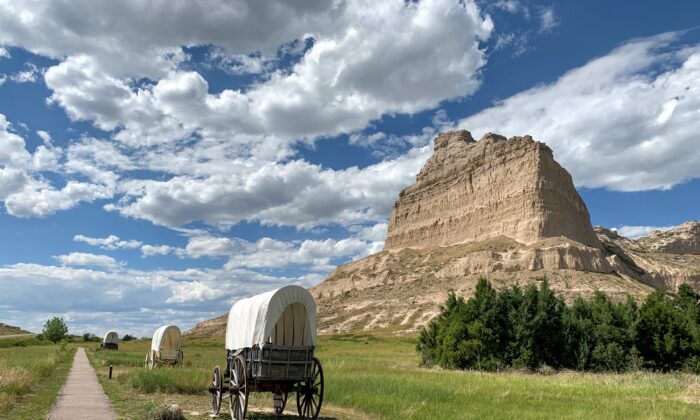 A Road Trip Through Northwestern Nebraska

Scattered among the expansive prairies, wide valleys and mountaintops of America are thousands of rural towns and communities. Travelers often miss these far-flung destinations, but they offer a rewarding, uniquely American experience to those who venture off the beaten path.

That’s especially true in this time of social distancing. The wide-open spaces, free of crowds, offer the chance to explore—and that’s healing after months of isolation.

My sister Debbie and I took a recent road trip to northwestern Nebraska, a sparsely populated region with a rich history, ancient geological formations, and several state or historic parks.

Our destination was Our Heritage Guest Ranch near Crawford, Nebraska, a sprawling ranch tucked in the hills and canyons of Nebraska’s top left corner, some 30 miles from Wyoming and 12 miles from South Dakota.

Since we live near Denver, it was an easy 4.5-hour drive. Denver is the nearest big airport to western Nebraska, while Omaha is a good eight hours away.

As we drove NE-71 up the western side of the state, we often had the road to ourselves. The majority of Nebraska’s 1.9 million residents live in the eastern part of the state, and most of the state is rural. Nebraska is famous for its rich farmland (this is the Land of the Cornhuskers, after all), but western Nebraska has a whole different feel.

Most people imagine Nebraska to be a flat prairie, but the further north we drove, the hillier it got. Here, rugged buttes of clay and sandstone rise from the earth, a visible tribute to the region’s ancient past. The tall ridges are often rich with fossils.

Northwestern Nebraska is ranching country, and we passed field after field of grazing cattle, bison, and longhorn cattle.

Tin-Roof Sundaes and Bowling in Potter

Halfway there, we decided to make a short detour to Potter, population 350. America can thank this little town for the invention of the Tin Roof Sundae, a sugary concoction of ice cream with chocolate syrup, marshmallow cream, and nuts.

We stopped into The Potter Sundry, where the creation was invented, to sample it for ourselves. The soda fountain looked like it hadn’t changed much since its beginnings in 1916.

“I’d advise you to get a small, because that will sure fill you up,” a local rancher in a cowboy hat advised. He wasn’t kidding. The “small” ice cream treat was enough to feed a small family, but I tackled it all the same.

“The secret is the marshmallow,” said Warren, a retired Kansas pastor who now volunteers to serve tables at the restaurant. The folks at several other tables agreed, and in small-town fashion, soon we were all having a nice conversation—socially distanced, of course.

One local suggested that we stop at the Potter Duckpin Bowling Alley next door. This historic bowling alley, which has been lovingly preserved, is the last remaining duckpin bowling alley west of the Mississippi. You can rent the whole space for your family or group bowling for only $25 an hour.

While we didn’t have time to bowl, we did make time for a stop at A Collective Gathering, where 25 different vendors sell an eclectic collection of gifts, arts, and specialty foods made in Nebraska.

Then, we were off to our next stop at the Scotts Bluff National Monument. Known to locals as “The Monument,” this giant bluff rises 800 feet above the floor of the Platte Valley. It’s all that remains of the ancient High Plains that have eroded over millions of years.

Pioneers on wagon trains from the Missouri River must have been awed at the sight of the massive bluff. More than 350,000 pioneers are estimated to have passed through here between 1836 and 1869, and their wagon ruts can still be seen.

We walked a trail along the national monument (it’s free to enter the park), thinking about those days, then drove to the top of the bluff for an expansive view of the valley.

A Twist on Stonehenge

We made one more stop in the town of Alliance, home to a quirky attraction called Carhenge. Carhenge is a replica of Stonehenge in England, the ancient alignment of stones that chart the phases of the sun and moon. Nebraska’s version is created from vintage automobiles from the 1950s and 1960s, with the same dimensions as Stonehenge. It’s free to visit.

The sun was low in the sky as we made our way to Our Heritage Guest Ranch. Located 12 miles down a dirt road near Crawford between the Oglala National Grasslands, the Pine Ridge region, and the Badlands of Nebraska, Our Heritage is a working cattle ranch. The ranch has guest accommodations, including a historic guest cottage that sleeps six ($175 per night) and two apartments in the barn.

The best part of the ranch experience is owner Jean Norman. My sister and I spent a fun morning out with her in her truck as she checked on the cattle, showed us the ranch, and introduced us to her horses. Along the way, she told us stories of how her grandparents homesteaded the ranch in 1887, and how Mother Nature challenged the family with bad storms and even a fire.

Ranch guests can also add other activities through several ranch partners. M&M Overland Coach offers a chuckwagon cookout and ride on an original 1860s Sidney-Lead-Deadwood stagecoach. You can book a fossil-hunting adventure with a local expert or just spend the evening stargazing. The ranch’s remote location provides a good place to view the night sky.

Chadron is about 45 minutes from the ranch, but well worth the drive. The town of 5,400 is home to several popular restaurants, including the Bean Broker Coffee House and Pub, which is known for its stone-fired pizza, hearty sandwiches, and breakfast dishes. (My sister and I went back several times for their delicious pastries.) Owners Paige and Dave Feddersen gutsily opened the restaurant during COVID, but it already has a loyal following.

Nestled among the buttes and canyons of Nebraska’s Pine Ridge, Chadron State Park is the main attraction in the region. As Nebraska’s first state park, it is a popular family vacation destination. The park has cabins for rent, as well as a campground. We saw families fishing, hiking, on the archery range or playing in the pool.

We spent an afternoon visiting the town of Crawford, population 1,069. It has several unique stores and is home to the Broken Spur, a favorite local restaurant in a beautifully restored historic building. Diners come from more than an hour away for their popular prime rib and steak dinners.

Crawford’s history is closely intertwined with nearby Fort Robinson State Park. Fort Robinson served as a military post from 1874 to 1948. A visit to the Fort Robinson Museum gave us new insight into those tumultuous times. We stopped to visit the monument for Crazy Horse, who had surrendered here but was killed during a brief struggle.

In later years, Fort Robinson had many roles as a cavalry outpost, as the last great gathering of the Sioux, a military dog training center, a World War II POW camp, and more. Today, however, it has been transformed into a popular outdoor recreational park.

In normal times, visitors can go trail riding, take stagecoach rides, and go tubing on the river. Fort Robinson has historic lodges, cabins, and homes that are available for rent, and there is plenty of room to hike, bike, and play outdoors.

Just 30 minutes from Crawford is Toadstool Geologic Park, a region in the Oglala National Grassland that is named for its otherworldly rock formations. Narrow clay pedestals with huge slabs of sandstone on top look like giant toadstool mushrooms. These ancient formations house many fossils or footprints of creatures such as extinct three-toed horses, saber-toothed cats, and camels.

Debbie and I were only a handful of visitors in the park. We took the one-mile trail through the odd-shaped formations. Seeing all the layers, it almost felt like I could see the passage of time.

Other things at the park are a 10,000-year-old bison bonebed and a reconstructed sod house. There is a small campsite onsite.

Ending our visit, we decided to visit one last park. The Agate Fossil Beds are located 22 miles south of Harrison, population 251, in Sioux County. (Fun fact: 2,000-square-mile Sioux County has a population of only 1,500 people.)

The park’s remote location, however, belies its rich fossil record. Agate Fossil Beds Visitor Center is closed, but there is a mobile ranger unit open, and you can explore the grounds. After grabbing a map, we hiked the one-mile Daemonelix Trail, which almost felt like a walk through time. We passed ancient sand dunes and fossil grasslands, but the most interesting thing to see were fossilized spiral beaver burrows. Peering at such a simple, but useful thing from so long ago was moving.

Hopping back in the car, it was time to head home to the city. We took our time exploring the backroads of Nebraska on our unhurried way back home.