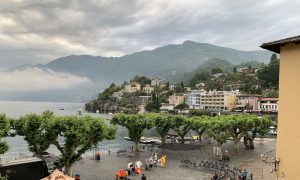 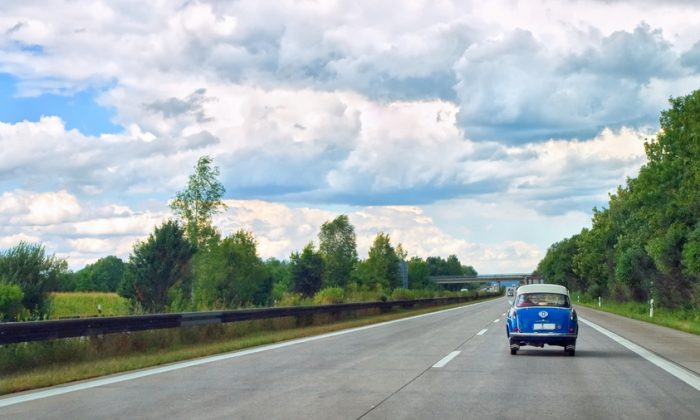 Cruising on the autobahn. (Shutterstock)
Destinations

A Road Trip Across Germany

For those whose bucket list includes a cross-country road trip, but who don’t have abundant time, consider Europe. There, you can seriously truncate the 3,000-mile New York-to-LA route and still feel a sense of accomplishment at the rental car drop-off site.

My wife was heading to Berlin for her annual meeting, and as I have relatives and friends across Germany, I knew a road trip was in order. I picked up a Jeep Wrangler at Frankfurt Airport, and immediately became a rolling commercial for the United States.

I headed northwest to visit family friends in the Mittelrhein Valley, and enjoyed touring wine country, cruising at about 120 mph on the autobahn that tracked the Mosel River on our right. Steve McQueen would have been proud: My friend was at the wheel of his Mustang GT, recalibrated for autobahn speeds.

Germany has become incredibly “green,” accepting higher utility rates, while the nation segues from nuclear, coal, and oil into wind, solar, and Russian-supplied natural gas. On my trip across the country, I saw literally thousands of wind turbines and scores of solar farms. But don’t mess with speed limits on the autobahn or what may be, collectively, the finest cars on the planet.

Germans pay about double what Americans pay for gas, the difference being mostly taxes. But that’s an annoyance not worth mentioning to the proud drivers of Porsches, BMWs, Mercedes, Audis, and even Volkswagens.

I continued northwest to the suburbs between Cologne and the Dutch border, where some relatives of my father’s family still live. This was my westernmost driving point, before heading east, cross-country. I ate lunch in downtown Cologne with a former New York City Hall colleague. My next stop was Attendorn, in the lake region known as the Sauerland, followed by a longer drive to Hoexter, the small city on the Weser River where my mother’s family has been traced to a marriage in 1662. A cousin’s theory is that a Swedish soldier remained in the area following the Thirty Years’ War, marrying a local woman.

Attendorn and Hoexter are what we would call flyover country in the United States, except that the distances make travel by automobile tenable. My relatives and in-laws are moderate in temperament and political outlook. One feared that President Donald Trump might get us into war, not having received the news that he has an aversion to military adventurism. I detected a consensus that the million migrants allowed into Germany in recent years could be absorbed, but “Jetzt, schluss!” (But now, enough!)

The German news media, as well as those of other European nations, has a decidedly anti-American and particularly anti-Republican tilt. Recall the 1980s, when President Ronald Reagan and Chancellor Helmut Kohl were seeking to bolster anti-Soviet defenses by installing medium-range missiles in then-West Germany. Street protests and media criticism were relentless. Reagan suffered from negative approval ratings in Germany, until he spoke to the Bundestag, an address carried live on TV. Within a week, Reagan’s approval numbers among Germans flipped to markedly positive. The missiles were fixed in the West, Reagan and Kohl were re-elected in landslides, and the beginning of the end of the Soviet Union had commenced.

Back to the road: Upon leaving Hoexter, I drove the longest leg of my trip, mostly through the former East Germany. Out from the yoke of communism, this region is united Germany’s new Kansas, with fields of grains and vegetables, punctuated by those wind turbines, visible into the distance. It’s on these flat, less-crowded stretches of autobahn that I can drive over 100 mph, yet always remaining wary of another driver about to pass me.

I arrived in Berlin in the Jeep not long after my wife had landed at Tegel, the city’s outdated but convenient airport. Perhaps the biggest rebuttal to Germany’s vaunted efficiency is its inability to open its long-planned new airport just outside the city. Originally scheduled for a 2011 inaugural, the Berlin-Brandenburg airport may not even meet the latest October 2020 announced opening. Actual expenditures have already exceeded double the original budget estimates.

Yet Berlin has, in these 28 years since East-West unification, become a real world-class capital city, as it was pre-Hitler. It retains seven major orchestras, is rich in museums, and new ones are opening. Berlin’s Museuminsel (Museum Island) alone is home to seven world-class museums, led by the Pergamon. The Jewish Museum chronicles the millennium-plus contributions of Jews in Germany, along with the horrors they endured during the National Socialist years. It complements the most moving monument in Berlin, the Memorial to the Murdered Jews of Europe, a few minutes from the Brandenburg Gate.

German cuisine is evolving and is now first-rate, but nearly every ethnic food in the world can be found. For example, there are more than 200 Italian restaurants in Berlin. And of course, it’s impossible to locate a mediocre domestic beer in Germany.

My cross-country route was motivated by wanting to visit relatives and friends. There were noteworthy scenic vistas on my route, ranging from the 515-foot Cologne cathedral and the majestic Rhine, on to some of the quaintest villages you can imagine. But for truly breathtaking views in Germany, try the northern Alps (including the world’s most famous castle, Neuschwanstein), the Black Forest, the Erzgebirge mountains near the Czech border, and the pristine beaches of the North and Baltic sea coasts, including the rugged island of Ruegen.

In Berlin, I connected with more relatives, along with acquaintances and friends, including some former New Yorkers. Even in Berlin, this cross-section of German urbanites conceded that media coverage of the United States has gone from bad to worse. A few pointed out that literally no positive news about Trump or his initiatives have been reported by news organizations.

The array of people I spoke with ranged from retirees to a noteworthy publisher, a former Wall Street executive, a teacher’s aide, an entrepreneur, a high-tech factory worker, a marketing executive, a business manager, a university professor, a U.S.-born author, diplomats, a pharmacist, and an English instructor, among others.

Despite the one-sided picture of the United States painted by European media in 2019, the folks I visited were generally pro-American, though their preferences in U.S. presidents varied. One younger relative, who’s not especially political, expressed support for our president’s “America First” philosophy, and wished that German leaders advanced such policies. Generally, there was support for the European Union, with some grumbling about excessive involvement in local affairs.

How best to strengthen the U.S.–German alliance and friendship? More meaningful exchanges would help. Then, imagine a future U.S. president addressing the Bundestag in German, and a German chancellor speaking live to a U.S. TV audience in English. And some more honest news coverage, please, on both sides of the Atlantic. I can dream, can’t I?

I turned my vehicle in to a rental car garage near Berlin’s much-praised downtown zoo, the home of departed polar bear icon, Knute. My odometer had clocked 1,001 kilometers, or just 623 miles. And yet, I almost traversed Germany, from the Dutch border region in the west to Berlin, just 40 minutes from the Polish border in the east. I had a sense of accomplishment and I gained some knowledge along the way, without the fatigue innate in a transcontinental drive.

Leaving my rental Jeep, I wasn’t sure if I should whistle “Route 66” or a rousing Oktoberfest song.

Herbert W. Stupp is the editor of Gipperten.com and served as a NYC commissioner in Mayor Rudolph Giuliani’s administration (1994–2002). Early in his career, he won an Emmy award for television editorials.