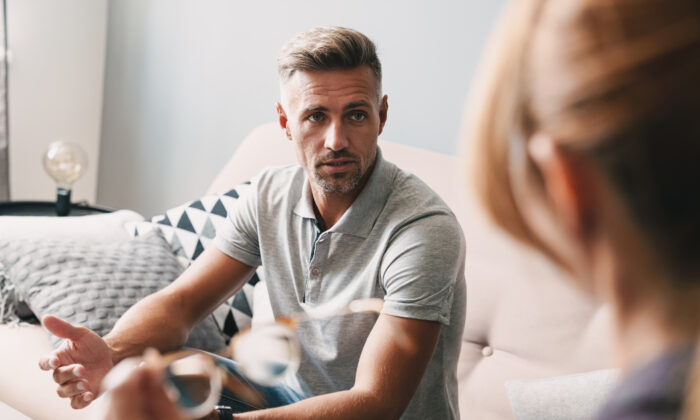 Talk therapy can cause trauma victims to relive terrible events, but EMDR can help alleviate this problem
By Martha Rosenberg

Awareness of the effects of trauma in veterans, survivors of natural disasters, wars, terrorism, accidents, crimes, and child abuse is growing. Regardless of when the terrifying events occurred or what form they took, trauma-related conditions often include flashbacks, nightmares, anxiety, depression, insomnia, preoccupation with frightening thoughts, alcohol and drug addiction, difficulty with jobs and interpersonal relationships, and problems living in the present.

Sadly, because trauma conditions are often characterized by repressed memories that someone cannot consciously “handle,” traditional talk therapy often fails to help. “Therapists have an undying faith in the capacity of talk to resolve trauma,” says Dr. Bessel van der Kolk, author of “The Body Keeps The Score; Brain, Mind, and Body in the Healing of Trauma,” a bestseller since its 2015 publication. “Unfortunately, it’s not so simple: Traumatic events are almost impossible to put into words … bodies re-experience terror, rage, and helplessness, as well as the impulse to fight or flee, but these feelings are almost impossible to articulate.”

But there is good news for those whose lives have been shaped and limited by trauma. Many have found relief with EMDR (eye movement desensitization and reprocessing) a non-invasive, low-tech therapy that helps patients detoxify traumatic memories and get on with their lives.

How Does EMDR Work?

EMDR can appear deceptively simple. Patients merely watch a therapist move his or her fingers back and forth while recollecting their trauma or the images and emotions connected with it. The combination of eye movements and recollections serves to make the memories less overwhelming and unbearable. The conscious brain seems to accommodate, acknowledge, and accept the memories which, though still unpleasant, no longer need to be pushed down—or resurface as nightmares and flashbacks.

Why would simply moving the eyes in a particular way enact these changes? Researchers who reviewed previous research published their findings in the journal Neuropharmacology in 2016 and theorized that the movements induce “a neurobiological state similar to REM sleep, a period during which emotional-memory processing is theorized to occur.”

A previous review published in the Journal of Clinical Psychology in 2002 suggested that the induced REM-like state can “lead to a reduction in the strength of hippocampally mediated episodic memories of the traumatic event.”

Another theory of EMDR’s effectiveness is that the eye movements “increase interhemispheric communication”— interactions between the left and right hemispheres of the brain. The left brain is rational, logical, and language-oriented whereas the right brain is emotional, visual, and intuitive. Not surprisingly, traumatic events activate the right brain and deactivate the left; a harmony between the two, under this theory, would offer relief.

Finally, it has been theorized that the panoramic vision EMDR produces—the eyes sweeping back and forth rather than focusing on just one spot—may allow the brain to turn the autonomic nervous system and its associated norepinephrine on and off, which could provide relief from trauma anxiety.

A Proven Tool in Trauma

Van del Kolk, considered the world’s leading trauma expert, says his search for better treatments sprang from a study of traumatized Vietnam veterans that his colleague Dr. Roger Pitman conducted in the early 1990s in which patients got worse not better. The “investigators had to stop the study because many patients became panicked by their flashbacks, and the dread often persisted after the sessions,” he wrote. Many veterans “became more depressed, violent, and fearful” leading to alcohol abuse, arrests, and hospitalizations.

A quick look at the medical literature shows EMDR is widely practiced. It’s been used to treat psychosis, depression, obsessive-compulsive disorder, panic disorder, and alcohol dependency, and in pain management, wrote researchers in Frontiers in Psychology in 2018. Its “efficacy for treatment for PTSD is now well documented,” they wrote.

In a 2020 Journal of the American Medical Association (JAMA) review of the military therapies used for trauma, Maria Steenkamp, clinical assistant professor of psychiatry at New York University’s Grossman School of Medicine, calls EMDR “highly effective” in her patients.

Today, EMDR is recognized as a useful modality by the U.S. Department of Veterans Affairs (VA), U.S. Department of Defense (DOD), the World Health Organization (WHO), the International Society for Traumatic Stress Studies, and the national health services of many countries. EMDR was employed for survivors of the 2001 9/11 terrorist attacks in the United States, after the 1995 Oklahoma City bombing, and for trauma victims in Bosnia and Herzegovina.

In fact, EMDR’s ability to treat trauma may even surpass results seen with the more common pharmacological treatment. In one trauma trial, van der Kolk cites in his book, “The Body Keeps Score,” subjects who were given EMDR showed significant improvement over subjects on either the SSRI antidepressant Prozac or a placebo—and after only eight EMDR sessions, a quarter of the subjects were “cured.” At the eight-month follow-up, 60 percent of the subjects had maintained their recovery.

Trauma patients often improve on drugs such as Prozac, Celexa, Paxil, and Zoloft, van der Kolk adds, but only as long as they keep taking them; the medications don’t get to the root of the trauma so aren’t a solution. In one of van der Kolk’s studies, EMDR outperformed a drug on another scale: “It produced a greater reduction in depression scores than taking the antidepressant.”

Not only can EMDR sometimes actually “cure” trauma, it can work very quickly. For example, a 2009 American Psychiatric Association (APA) guideline mentions a study of transportation workers who were traumatized by assault or witnessing a deadly accident but who “no longer met criteria for PTSD” after only five EMDR sessions.

In another study cited by the APA, 75 percent of women who were rape victims also “no longer met criteria for PTSD” after nine EMDR sessions, and “results were maintained at 6-month follow-up.”

In addition to scientific studies, many EMDR therapists and patients have shared success stories with EMDR therapy. Psychologist Ken Miller, author of “War Torn,” says he became interested in EMDR when struggling to help an elderly Bosnian man whose symptoms of PTSD were the worst he had ever seen and “would not diminish with conventional therapy or psychiatric medication.”

After only five EMDR sessions, “this previously devastated, suicidal man was relaxed, smiling, sleeping without medication for the first time in years, and becoming interested in engaging socially with other people once again,” Miller wrote in Psychology Today.

Jeffery Tejcek, who created an online EMDR program that has treated thousands of patients including military veterans, law enforcement officers, first responders, and frontline health care workers, says there are 35 life changes EMDR may produce in patients including an end to “bothersome thoughts and flashbacks about a traumatic event,” the diminishment of their fears and phobias, the ability to quit an “addictive behavior,” and “coming to terms” with trauma.

Why is such a touted therapy not the first-line treatment for traumatized people? EMDR proponents suggest the aggressive marketing of psychiatric drugs could be one reason. Another is the fact that medical groups and insurers are used to defining, diagnosing, and treating trauma on their own terms and resent their “turf” being invaded. Still, insurance plans that cover therapy will likely cover EMDR so check with your own.

As awareness of the lifelong, adverse effects of trauma grows, it’s likely the use of EMDR will grow, too.