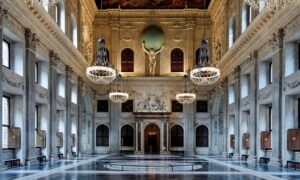 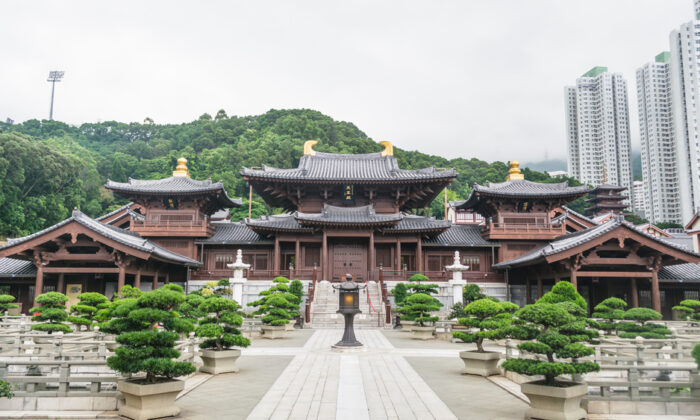 The Hall of the Celestial Kings adopts an architectural layout from the Tang Dynasty, with one central hall balanced by a drum tower and bell tower, one on either side. These two side pavilions reach forward as if arms outstretched to welcome guests. (sharppy/Shutterstock)
Fine Arts & Craftsmanship

A Portal Into an Ever-Present Spiritual Realm: Chin Lin Nunnery and the Nian Lin Garden

Larger Than Life: Art that inspires us through the ages
By James Howard Smith

The 1998 construction of the Chin Lin Nunnery and the Nian Lin Garden of Hong Kong are remarkable representations of China’s ancient culture, which sought to bring harmony between Heaven and Earth. Grand Tang Dynasty temples stand overlooking broad courtyards that seemingly float upon lotus ponds and open to the heavens. Pavilions rise above the mystifying garden ponds arousing wonderment and joy.

Passing through the Shenmen (main entrance) symbolizes the passage from one shore to the other. The most captivating scene then appears: A courtyard richly ornamented with bonsai trees and the Lotus Pond Garden lies in the foreground of the Hall of the Celestial Kings.

This scene was inspired by and hence is the physical manifestation of a monk’s mural that depicts his meditation journey into Buddha Amitabha’s Paradise, “The Pure Land.” The mural is one of the High Tang Dynasty’s paintings of 705–781 A.D. found in the Mogao Caves in the far northwest of China.

The courtyard seems to be a portal into an ancient, but ever-present spiritual realm, where the mural depicts Buddhas residing there and in the temples beyond. The courtyard’s walkways are arranged around four lotus ponds; yet, in walking along them, it’s as though you are crossing over bridges and floating above one larger pond.

After passing back through the Shenmen, a vermilion arched bridge draws the eye to and offers a direct connection to the main focus of the Nian Lin Garden: the Pavilion of Absolute Perfection. Exuding a golden glow, the pavilion rises amid the vibrant green landscape from an island in the lotus pond.

The unique Black Pines bonsai combined with weathered rock formations establish the ancient Eastern setting. They also set the miniature scale that is supported by the small hills and water bodies. Together they create an illusion of a journey through a remote, mountainous landscape.

This technique of essentially creating a microcosm of grand remote landscapes is typical of Chinese classical gardens. It provides those without an opportunity to travel the experience of an uplifting atmosphere within an urban setting.