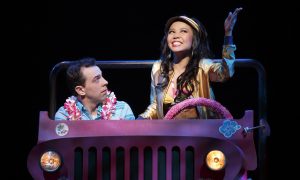 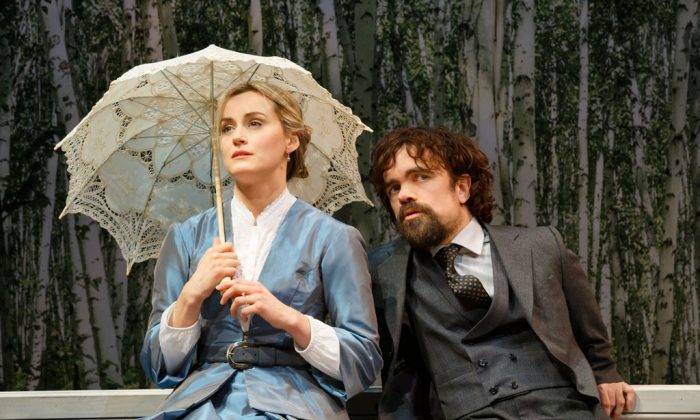 Natalya (Taylor Schilling) is bored with her life on the estate, but her many love interests, including Mikhail Rakitin (Peter Dinklage), keep her entertained in Ivan Turgenev’s classic “A Month in the Country.” (Joan Marcus)
Arts & Culture

A Penetrating Look at What Passes for Love

NEW YORK—Love takes many forms in Ivan Turgenev’s 1855 work “A Month in the Country.” A sturdy production of this multilayered tale, ably translated by John Christopher Jones, is currently at Classic Stage Company.

The tranquility on the Arkady Estate in Russia, circa 1840, where Arkady (Anthony Edwards) and wife Natalya (Taylor Schilling) are entertaining longtime friend Mikhail Rakitin (Peter Dinklage), belies feelings simmering just below the surface. Feeling stifled in her quiet country life, Natalya’s one outlet is her friendship with Mikhail, an intellectual fellow who’s deeply in love with her—a condition Natalya does nothing to discourage.

She also has a pleasant distraction in Aleksey Belyaev (Mike Faist), a 21-year-old tutor Arkady has engaged for their young son, Koyla (Ian Etheridge), though Aleksey may be more interested in Natalya’s 17-year-old ward, Vera (Megan West).

What is presented is a fascinating and often quite dramatic look at the many facets of the heart.

At the same time, Shpigelsky (Thomas Jay Ryan), the local doctor, has come to plead the case of Bolshintsov (Peter Appel), a somewhat foolish but wealthy older neighbor who wants to make Vera his wife.

The above plotlines, along with several others, could easily be played for outright comedy or farce, but what is instead presented is a fascinating and often quite dramatic look at the many facets of the heart. Elements ranging from marriages of convenience and escape to states of infatuation, yearning, lust, and jealousy, and how they all fit into the social and class mentality of the time, are examined.

It’s also interesting to note that none of the major characters are completely sympathetic. Each eventually is undone by his or her own passions and indifference to others—such as Shpigelsky mentioning the three horses he will receive from Bolshintsov if the doctor can deliver Vera to the alter. This shifting of loyalties also shows how friendships are often sacrificed for the sake of one’s own needs.

Carefully balanced with these moments are a number of lighter scenes. One in particular is an absolutely hilarious matter-of-fact marriage proposal by Shpigelsky to Lizaveta (Annabella Sciorra), a companion to Arkady’s mother (Elizabeth Franz). Ironically, this particular situation, in which both know exactly what they’re getting into from the outset, may have the best chance of succeeding out of all the relationships presented.

Schilling is letter-perfect as the regally playful and sometimes scheming Natalya. An apparent woman of breeding who feels suffocated in her current lifestyle, she’s not above manipulating people and situations to get what she wants—especially when jealously enters into the mix.

Dinklage cuts a very compelling figure as Mikhail, the one person who most understands what’s happening in regard to the various situations developing on the estate. His verbal interplay with Natalya, Shpigelsky, and Aleksey are quite telling.

However, it would have been nice if there were more of a back story for Mikhail. This is only one of several times when the play does not delve as deeply into a person’s past as it should. Not fully exploring the genesis of Natalya and Arkady’s relationship is another example.

Edwards is amiable as Arkady, a good natured and often oblivious fellow who looks on the positive side of everything. He is this way even when forced to confront something he’d much rather not, such as another man being in love with his wife. He still tries to make everything as easy as possible for everyone involved.

West does a masterful job in the ever-changing role of Vera. Looking younger than the character’s 17 years when first seen, she transforms Vera from a wide-eyed child to a bitter woman filled with hatred for the one who destroyed the freedom and innocence she once had.

The action moves smoothly and always with a deeper meaning than what is actually said aloud.

Ryan is wry as Shpigelsky, a man who knows his place in the world and is somewhat bitter about having to interact with certain people in order to maintain his livelihood.

Faist is okay as Aleksey, but a bit one-dimensional at times. His declaration of love to Natalya, in particular, never really rings true.

Sciorra, meanwhile, gets in some good moments as Lizaveta, often from what she doesn’t say—such as how she reacts to the doctor’s marriage proposal.

Appel cuts both a pathetic and comic figure as Bolshintsov.

Direction by Erica Schmidt is strong; the action moves smoothly and always with a deeper meaning than what is actually said aloud. More importantly, Schmidt keeps the play involving from the first minute to the last as one wonders how the various scenarios will conclude and which of the characters, if any, will actually find lasting happiness.

Mark Wendland’s sets are good; costumes by Tom Broecker are nicely done, especially the gowns the ladies wear. Lighting by Jeff Croiter fits in with the story’s different moods.

Showing what happens when matters of the heart get mixed up with social responsibility, lustful yearnings, cool reason, and the need for escape, “A Month in the Country” is compelling indeed.