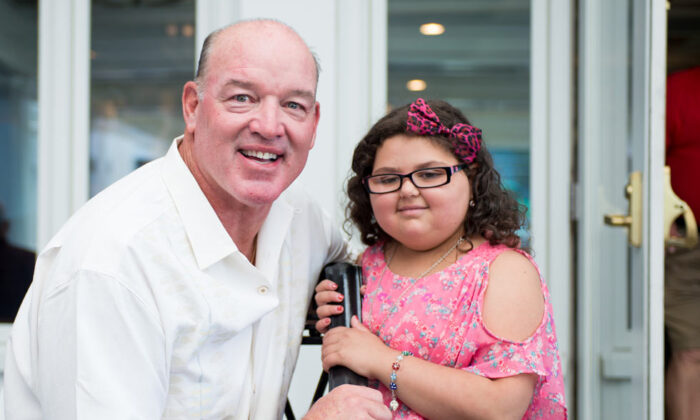 Marty Lyons has been working with seriously ill children through his foundation since 1982. (Courtesy of the Marty Lyons Foundation)
People

Marty Lyons is best known as the legendary New York Jets defensive tackle who was part of the team’s New York Sack Exchange, the front four defensive linemen for the team famed for their ability to take down quarterbacks in the early 1980s. He played with the Jets for 11 seasons and was named the NFL’s Man of the Year in 1984. What’s less known is the work he’s done off the field for more than 35 years.

Lyons, now 63, lives in Smithtown, New York.  Early in his career, he became a big brother figure to a young boy named Keith, whom he met at a fundraiser for leukemia in 1980. Keith was only 3 years old and was terminally ill. Lyons approached him and spent the day trying to coax him into opening up. At the end of the event, Keith came up to Lyons and hugged him, telling him, “I love you.”

From that moment on, Lyons formed a close relationship with Keith, whose parents were in the middle of a divorce. Lyons would take him to his leukemia treatments, and would bring him presents from away games.

“I just came in there and acted like a big brother, and acted with a great deal of love and compassion for him,” Lyons said.

Lyons’s relationship with Keith, as well as his work with other severely ill children, made him reflect on his own life.

“It gave me a new appreciation for the opportunity to play the game of football,” Lyons said. “You left feeling better about who you were, about the opportunities that you had, and you left with another friend.”

In March 1982, Lyons had the rollercoaster month of his life. Within the span of just a week, Lyons experienced the birth of his first son on March 4 and the sudden death of his father from a heart attack on March 8. Keith tragically succumbed to leukemia on March 10.

At 25, the professional football player struggled to comprehend their deaths.

Lyons reflected on the loss of Keith and his own father and decided to start a foundation to honor their memory. He was used to feeling important as he ran out onto the field every Sunday, and he wanted to give seriously ill children the opportunity to feel important, too.

For Lyons, philanthropy was a critical component of his professional football career and continues to be his passion. Giving back to his community was never about getting good press. It has always been about doing the right thing. His biggest hope is to encourage seriously and terminally ill children to keep fighting. Tragically, approximately 6 out of every 10 kids that the foundation works with won’t live to be 18. Nevertheless, he hopes the children realize how important their lives are.

“None of them fear dying. None of them have ever said to me, ‘Why me? Why am I sick?’ They don’t approach life like that. They all know that they’re here for a reason. They’re here to make us a little stronger if we take time to listen to them, to understand them, and to get to know them,” Lyons said.

All of the kids Lyons has worked with have made an indelible impact on him. Their families, too, have left an impression. In one case, Lyons worked with a family that was caring for two terminally ill children. Instead of having them spend their last days in a hospital, they knocked down a wall in their house and turned it into an intensive care unit for their kids.

When Lyons visited the family, the two boys were on respirator machines. The parents had asked for a generator because their home often lost power. They told Lyons that they were faced with the unfathomable scenario of having to decide which son to resuscitate by hand first if the power were to fail.  Two months later, Lyons and his foundation were able to deliver the generator.

“We knew that that day, one day those boys will die, but it wouldn’t be because the power went out,” Lyons recalled. “It’s that type of experience that really stays with you.”

Lyons and his foundation continue their mission to help seriously and terminally ill children but have encountered obstacles during the pandemic. Unfortunately, the organization has had to cancel all its fundraisers as a result of lockdown measures. Many of the travel wishes that were to be granted have been postponed because of travel restrictions. Lyons hopes that these children can hold on long enough for the foundation to grant their wishes.

The organization has tried to adapt and held a virtual auction earlier last December. Lyons has also recently completed his new book “If These Walls Could Talk: Stories From the New York Jets Sideline, Locker Room, and Press Box,” which details his 40-year journey with the team.

Not only did he want to give readers an inside look at his experience as a player and commentator, but he also wanted to provide a glimpse of the work he does with children. He has signed away all his rights to the book, and all of the proceeds will go to the foundation. Readers so far have responded to the book with tears, laughter, and ultimately inspiration to do more in their communities and be better people.

“All you have to do is remind people that there’s people out there that are less fortunate than you, and you can make a difference,” Lyons said.