A New Falstaff at the Met 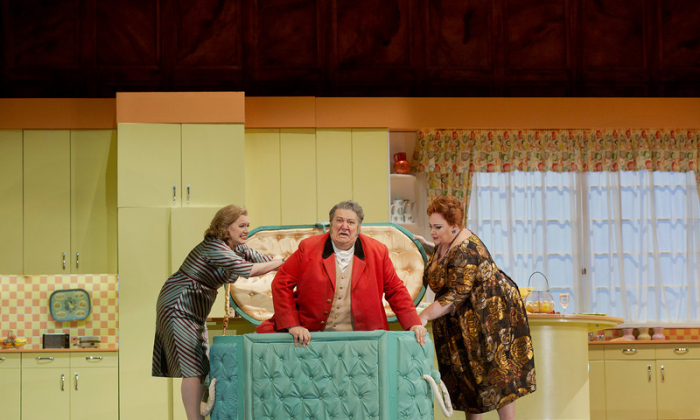 A New Falstaff at the Met

The Metropolitan Opera came up with a sublime ending to the Verdi Bicentennial Year: a new production of the composer’s final work, “Falstaff.” I have fond memories of Franco Zeffirelli’s version, especially when the lead was played by the remarkable Giuseppe Taddei. Nevertheless, the new production by Robert Carsen is very funny and musically engaging, with a terrific cast and James Levine conducting.

The action has been updated, from the Elizabethan era to 1950’s England. Sir John Falstaff is first seen at the Garter Inn, which has the atmosphere of a men’s club. He spends his time hatching schemes with his confederates and fending off creditors. He foolishly pens the same love letter to two of the well-heeled local wives whom he hopes to fleece. After the two ladies, Alice Ford and Meg Page, compare notes, at the urging of the droll Mistress Quickly, they plan to punish the old rascal. Meanwhile, Ford (Alice’s husband) learns of Falstaff’s intention to seduce his wife and decides to visit the rogue in disguise. Ford has plans to marry off his daughter Nannetta to stuffy Doctor Caius but she is in love with a young man named Fenton.

Mistress Quickly meets with Falstaff and tells him to visit Alice Ford at 2 in the afternoon when her husband will be out of the house. Ford appears soon afterward, pretending to be a man named Fontana, offering wine and money if the scoundrel will seduce Alice. Fontana’s justification for the odd request is that he also has designs on Alice and thinks if she has one extramarital affair, she will be more likely to embark on a second adulterous relationship. Falstaff announces that he already has plans to see her.

Falstaff shows up at Alice’s house but he is suddenly told that jealous Ford is on his way. He hides in a large laundry basket in the kitchen. Ford shows up with a crowd of townspeople who search the house looking for the corpulent knight. The angry husband hears sounds from under a table and thinks it is Falstaff. Instead, he discovers his daughter smooching with Fenton. In the confusion, Alice orders her servants to empty the laundry basket out of the window. When they do so, Falstaff is tossed in the River Thames.

In the next scene, he is sharing a barn with a horse eating hay. He bemoans the state of the world, but Mistress Quickly convinces him to meet Alice in the park that night. He is to wear the disguise of the Black Huntsman. Ford plans to punish Falstaff but also to wed Nannetta to Dr. Caius. Mistress Quickly overhears them and warns the young lovers.

At midnight, Alice appears and vows her love for Falstaff but runs off at the approach of the spirits, who are the disguised Nannetta and townspeople. They attack the knight for his wicked ways until he realizes they have tricked him. Ford is about to perform the marriage of Caius to the woman in white when Alice brings forth a second couple who also plan to wed. At the end of the ceremony, it is revealed that Nannetta has married Fenton and the woman in white is revealed as Bardolfo (one of Falstaff’s former accomplices). Everyone agrees that he who laughs last laughs best.

Ambrogio Maestri seems born to play Falstaff. He is mountainous, the tallest figure on stage and of immense girth (perhaps padded). More importantly, he has impeccable comic timing and sings with a large, rich voice and flawless style.  He is generally considered the finest Falstaff on the world stage and he confirms it here.  As Mistress Quickly, Alice Ford and Meg Page, Stephanie Blythe, Angela Meade and Jennifer Johnson Cano also turn in delightfully witty and well sung performances. As Nannetta, Lisette Oropesa, with a ponytail, looking like the young Debbie Reynolds, is a charmer. Her rendition of “Sul fil d’un soffio” was one of the evening’s highlights. Franco Vassallo’s Ford was vigorously acted but his Act II monologue was a bit disappointing. (For a point of reference, listen to Lawrence Tibbett’s 1926 recording on YouTube and you will understand why his rendition made the baritone an instant star.)

Director Robert Carsen maintains the comic momentum, aided by Brigitte Reiffenstuel’s 1950’s costumes and Paul Steinberg’s sets. The yellow kitchen and the pandemonium that takes place there are worth the price of admission. And, of course, with the extraordinary James Levine conducting, Verdi’s timeless music is in the best of hands.