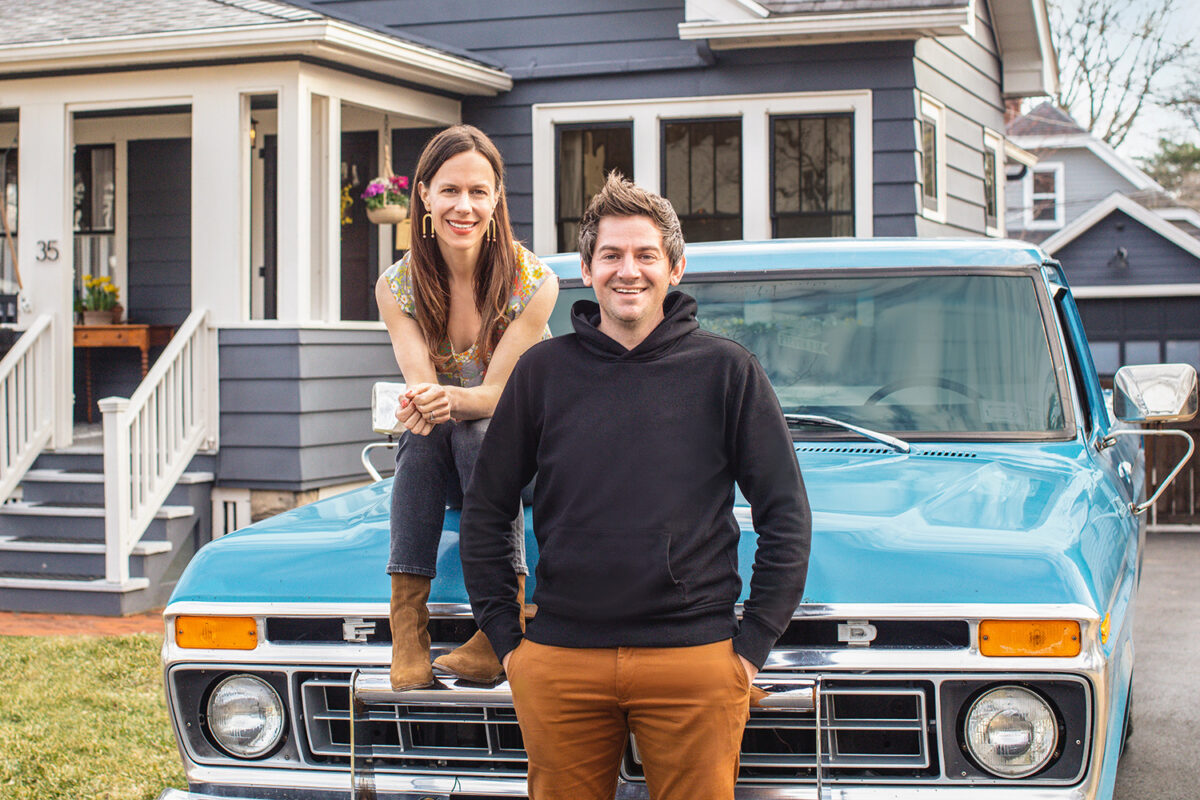 As seen on HGTV's Cheap Old Houses, host Elizabeth Finkelstein poses for a portrait at a historical bungalow in Rochester, NY. (Courtesy of HGTV)
American Essence

A Movement to Restore Old Houses: From A Social Media Phenomenon to the TV Screen

HGTV’s latest offering is not your typical flipping or renovation show. Cheap Old Houses follows the Finkelsteins as they visit old properties across the country—well-preserved treasures that have been neglected or laid vacant, but can be restored to their former glory by homeowners eager for a DIY project. Each house costs less than $100,000.

Cheap Old Houses started as a social media account (now with a following 1.7 million strong), where Ethan and Elizabeth Finkelstein listed historical homes up for sale across the country. Elizabeth, who earned a master’s in historical preservation, created it as a passion project in 2016, hoping to educate people on the value and beauty of old houses.

Ethan, who worked in digital marketing before running Cheap Old Houses full-time, noted that restoring an old house is not only important for preserving history and an emotionally rewarding experience to accomplish something creative with one’s bare hands—it is also a more financially viable option. Restoring a historic home isn’t as daunting as it may seem, he said. “I think the real horror story is having …a million-dollar mortgage and having $200,000 worth of interest that you have to pay off. Imagine … if you could buy a cheap house for $50,000.”

Throughout the 10-episode series, the Finkelsteins show their pure-joy enthusiasm for discovering bites of history through architecture, while offering practical ideas for restoring the homes they visit, via 3D renderings of design possibilities. Even if history is not your forte, their excitement will rub off and make you curious about the architectural features that tell a story about a certain time in America’s history.

American Essence recently caught up with the couple to discuss the show and their journey so far.

American Essence: how has the audience reaction been like so far?

Elizabeth: First of all, it’s a complete dream come true. I think the thing with old houses is that you can see photos of them as much as you want, but being inside them, I mean, they really engage all of your senses. At the same time, when you walk into an old building, you feel a real soul about it. And so getting to road-trip around the country, and visit these places that we’ve been looking at for so long on our Instagram feed, was just incredible. And being able to bring our audience along with us on that ride was, honestly, something probably even if we didn’t have a production company and a network to back us up, we would have figured out a way to do it.

Our community is the bread and butter of this whole thing and are the people that are truly making this happen. I think the response has been overwhelmingly positive. I mean, people just love it. I think people are excited to see a show that celebrates history and what is here and what you have, and celebrates people who are really devoting their lives to these homes. It’s been really, really exciting.

Ethan: As Elizabeth had mentioned, I think after many, many years of running [the Cheap Old Houses social media account]—we’re now five years [into running it]—we were just planning, how do we road-trip, get in the RV, stick our kid in the RV with us, and just road-trip around the country anyway, and meet these people who are buying these houses, and visit them and just see how they’re doing on their projects, and just be inspired on our own. And somehow it transferred into us dreaming that dream into a TV show. And now we’re doing it—instead of in an RV, we’re doing it in my 1977 Ford. It’s totally a dream come true.

AE: How did you become interested in restoring old houses?

Ethan: How we became interested was really through my family. They had a property that was from the 1700s, my grandmother and grandfather. And we would every summer, go there and ride the tractor and do big fires and ride down a sledding hill. There was this 150-acre farm, where my mom grew up with her eight brothers and sisters. And when I became a young adult, in my early 20s, this house was up for sale. To me, that was an extremely devastating moment. I don’t even know how to explain the emotion, but it was sort of like, how can we let this family treasure go? At the time, Elizabeth and I were just starting to date. We were maybe four or five weeks into dating and I was like, do you want to buy this farm with me? And it was $600,000. We totally couldn’t afford it at the time. Then, Elizabeth and I really just took on a ton of different adventures in exploring. We didn’t buy that house.

We just started exploring all of New York City. And we did open houses in New York, and we would go to the Ellis Island secret areas, and we would go underneath the MTA subway and we would go look at hidden places in New York. And I think beyond the experiential—being Elizabeth and her passion for this over the years, I’ve always tried to figure out, well, how do we make this like a digital thing? Because I’m a digital marketing person and a digital nerd. So we just kind of put our brains together and Cheap Old Houses was born.

I’ve been behind the computer for maybe 20-plus years. I think everyone can associate with being super burnt-out right now. We’re all digital nomads, living in our own different spaces. And right now, at this very moment, I’m sitting on our 10-and-half-acre property and I’m fixing up our house. It’s the most enjoyable moment of my last few years —to not be behind the computer and to be doing something that really needs me.

AE: Why do you guys feel it’s important for people hold onto these bits of history that present themselves within these houses?

Elizabeth: When we think of houses that typically get landmarked, these are houses that very important people lived in, or the sort of preemptive example of some specific style of architecture. They don’t tend to be the houses that the everyday Americans who made this country run, lived in. Nobody is preserving your great-aunt’s kitchen, right? You don’t get to go on a tour of that. In a sense, the interiors of these particular houses are more significant to the history of this country, because they were ubiquitous everywhere at a certain time. And I don’t think that people necessarily have an appreciation of them. I think that these homes are highly vulnerable to being flipped, being gutted. A house lasting 150 years could be stripped of all of its character, for some investor who doesn’t even live there to make a quick buck. And to me, that is the absolute saddest thing in the world. Because I think that the history of these communities and the pride of these communities is reflected in the community’s architecture.

And producing new materials—look at the cost of plywood now. I could go on and on about the reasons why we should preserve what you have. I think that we’re in an environmental crisis right now, and people think of things as being disposable. And that includes kitchens. And you don’t have to gut and throw out everything in your house every 10 years because of a new trend. And I just hope that our show allows people and gives people a certain appreciation for [history] and a feeling of safety—and maybe just thinking that what they have is good enough for now.

AE: How do you think this ‘old house’ trend will evolve in the future?

Elizabeth: Our Instagram feed was wildly popular before COVID, was wildly popular during COVID, and continues to be wildly popular. It doesn’t seem like there’s any time where living within your means and preserving history is a bad idea. It’s always a good idea to do the things that we are telling people that they should do on this show, which is, take your time, save your money, and respect your home. And try to learn a little something along the way.

In a world where we push pixels around all day, we don’t often get that feeling of intense satisfaction that we’ve accomplished something. The quickest way to get that is by using your hands and working on your house.

The more we show people that it’s a good thing to do, and that they can do it too—hopefully, more and more people will start doing it.

AE: Tell us more about the memorable houses you encountered that were amazingly well-preserved.

Elizabeth: We feature a house called Duncan Manor. This couple, Randy and Dave, are fixing up this house that was once on the list of top 10 most endangered buildings within Illinois. Tons of people have seen it, tried to restore it, and had not been able to do it. They were living in a tiny apartment in Denver, they saw it on Cheap Old Houses, they went to a wedding in the area. And a month later, they were camping out on the porch while they restored a room inside to live in. This house is like rising out of the field. It’s completely of another world. It is the most spectacular place ever.

In episode one, we go into a house that looks like a time capsule from 1950. It has the original pink bathroom and the steel kitchen from the 1950s that everyone’s grandmother had. We don’t go in any houses that aren’t really well-preserved, because we want to look at places that are little time capsules. We want to bring you back. We want you to feel a sense of nostalgia in these houses.

Elizabeth: We have so many. It is honestly like picking a favorite child. I mean, I think keeping old windows is a really big thing for me, because it’s really misunderstood. A lot of people are sold by the vinyl window industry that you should throw out your old windows and get vinyl windows. I’m always ready to preach why that’s a total fallacy, but I love the wavy glass that you see in old windows. I think the reason I love wavy glass so much is because it’s so imperfect. It has bubbles and waves, and so many things in these old homes—it’s the imperfections about them that show that they were made in small batches, and were handcrafted and have texture. That’s what we love so much about these old homes, these imperfections.

Ethan: I think I love very, very early 1700s buildings, mostly because of my grandmother.

What I also love is really quirky fun buildings that aren’t really supposed to be lived in. So there was a bank that we once posted about that someone saved. There’s a library. There have been schoolhouses, there have been lighthouses. Just the thought of living in a quirky building from whatever era excites me so much—to have a really fun, completely individual, one-of-a-kind house that’s old, that’s quirky, and also historically just amazing.

“Cheap Old Houses” is available to stream on discovery+. All episodes are also available on the HGTV streaming platform.