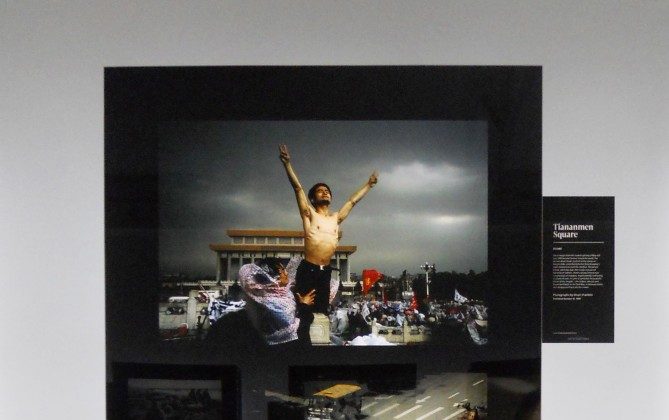 A Moment in Time

A man standing in front of a tank in Tiananmen Square; Fay Dunaway after winning an Oscar; a mother cradling her injured son during the Iraq War. What makes these photographs so iconic?

“They represent a mood, a spirit of the age. They capture something for the first time,” says Sarah Baxter, editor of The Sunday Times Magazine.

In 1962, when The Sunday Times launched its magazine – the UK’s first colour supplement – Roy Thomas the then owner sighed, “My God, this is going to be a disaster.” But from what was supposedly going to be a flop, the magazine has come a long way. The new supplement attracted a quarter of a million new readers.

A collection of stunning photographs, front covers, and feature articles selected from the 50-year-old magazine is currently showing on the top floor of the Saatchi Gallery.

Each image takes you into a moment in time.

In one, a mother is mourning her injured son, a 34-year-old who lost 40 per cent of his brain while on patrol in Ramadi. They are but two of the many affected by the Iraq War. “It’s like a Pieta image. It’s iconic; it’s somehow representative of a modern Madonna and child.” Baxter explains. “It’s just so intensely moving.” The image shows that their lives will never be the same again.

Next to it is an intimate picture of sleeping soldiers in Afghanistan shot by Tim Hetherington. He was nominated for an Oscar for Restrepo – a documentary project depicting an honest and close-up experience of war in Afghanistan through the eyes of American soldiers. Hetherington was later tragically killed in Libya while covering the conflicts there.

And perhaps one of the most famous images in the world was taken in Tiananmen Square on the morning of June 4, 1989. The moment when one brave man stood in front of a line of tanks won the photographer, Stuart Franklin, the World Press Photo award. “The challenge was to visually make sense of what was going on – to try to bring home what it felt personally for the people, who were being really quite courageous,” says Franklin. “A lot of people didn’t want to bring down the state; they just wanted better freedom, better freedom of expression.”

Among other projects, Franklin is currently working on a new book, Narcissus, exploring the connection between people and landscapes in western Norway, which will be published this year. He will also be working for a French magazine on a project that will show the hopes and fears of the French people before the elections in France.

Franklin is a member of Magnum Photos, a cooperative picture agency founded in 1947 by photographers with a burning curiosity to document the world around them. Among the co-founders was renowned photojournalist Henri Cartier-Bresson. “We work in a calm way, seriously, all over the place,” says Franklin. “We’re just working, I love it. I’m very privileged to be there.”

So what are the qualities of a good photograph? Franklin replies, “The spirit of the moment. Photography is really an abstraction of a whole range of events that happen in a particular locality. What a photographer does is finds a rectangle out of a whole piece of space and time, and says this is important, this moment, this is interesting, and this is going to move us.

“There’s a coherence of the whole; it’s not just one little thing in the middle of the photograph, but the whole photograph has to work. It’s hard to say – so many photographs, and they’re all so different – you just have to feel your way into it.”

Baxter too mentions how difficult it was to select the photographs for the exhibition, but she is sure that every image tells a story of its own – whether it’s a stunning landscape, a specific historical event, or a vivid portrait.

Photographer Chris Floyd captures close-up portraits, often of celebrities. He explains that the whole process of photography in his studio is artificial. “There’s fake light, there’s light that that doesn’t exist in real life, there’s equipment that doesn’t exist in real life, and you’re trying to get that little moment of magic, intimacy, in a fundamentally artificial process.”

One of the secrets to getting that moment of magic, he says, is asking people to sing. For instance, on a recent expedition to Austria he photographed the RAF ski team. He was taking a big group shot of them, and, as typically happens in these situations, they all huddled together and just stood there. So he said to them, “We’re on the side of a mountain, can you all sing ‘I’ve had the Time of My Life’ from Dirty Dancing?” And the result? “They did it, it was awesome. Something came out of it that was different.”

In one room, looking straight out at you, is Amy Winehouse, a portrait shot taken by Terry O’Neill. It has captured her essence, allowing the viewer to experience her life through the image even though she is no longer here. O’Neill is most famous for his photograph of Faye Dunaway, who he later married. She sits by the swimming pool of the Beverly Hills Hotel, with a dazed look after winning the Oscars the night before.

Like the magazine, this exhibition features some of the world’s best photography. And as Baxter points out, the images “pinpoint the time” – selected moments recorded in history.