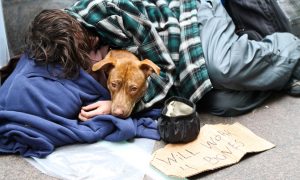 Homelessness Isn't a Crime, but When You're Homeless, You're Breaking the Law
0 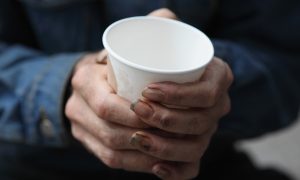 Who Are the Homeless and How Do We Count Them?
0 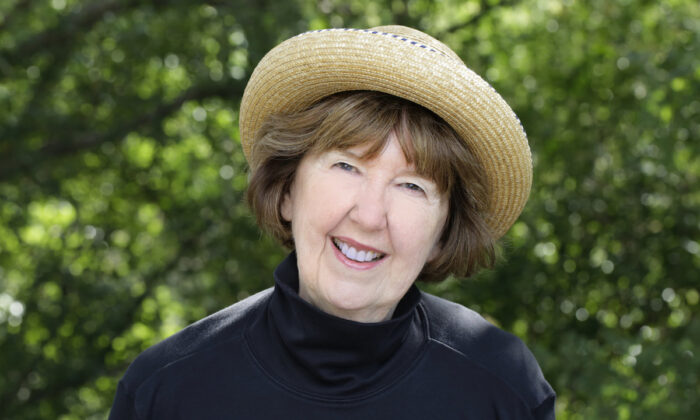 Judith Knotts has been working with the homeless community in Austin, Texas since 2003. (Dennis Fagan)
Life & Tradition

A Mission to Shed Light on the Homeless

The homeless are one of our country’s most neglected and misunderstood populations.

For a few days in 2003, a woman took a “leap of faith” to give up her comfortable bed and live on the streets with the homeless in Austin, Texas, and to connect with them. In return, she gained a new perspective.

Judith Knotts, 79, has lived in Austin since 2000. She earned a master’s degree in educational policy and leadership from Virginia Tech University and has been working in school administration since the 1970s.

While Knotts was growing up and attending public school in Pennsylvania, she recalls her fifth-grade teacher lining up the students’ desks by grade-point average. Knotts knew, even from a young age, that there had to be a better way to educate students.

“That was the seed for trying to improve schools,” Knotts said.

When Knotts arrived in Austin in 2000, she started working as a school principal in elementary, middle, and high schools. Ever since she can remember, she has always had a profound interest in how people become who they are. It was this passion that would lead to her work with the homeless. In 2003, a friend of Knotts told her he was organizing a “street retreat” group in Austin.

“Within two seconds, I thought: ‘I’m going.’ [It] was a total leap of faith,” Knotts recalled.

Inspired by his humility and honesty, she went out with the team to live among the homeless for 72 hours.

Knotts and the group went out without money, credit cards, or phones. All she had was a backpack and didn’t know what to expect. The experience affected her profoundly.

“It changed my life. I saw a whole different view of the world that I never knew existed,” Knotts explained.

Knotts was shocked by the environment that homeless people had to live in. The image of people stepping over a homeless woman sleeping on cardboard on the pavement in an alley stuck with her. The homeless were also kind to her and taught her skills such as where to find water.

She discovered how resilient they are, because after three days and three nights, Knotts was physically and emotionally exhausted. But that was nothing compared to the indefinite period of time that the homeless would have to endure on the street.

Knotts looked and continues to look at each homeless person as a person as opposed to a statistic, and considers how she could help. Unafraid, she spends time with homeless people and listens to them. Without asking prying questions, she engages them in conversation and tries to offer a friendly ear.

Although she doesn’t spend nights with the homeless on the street anymore, she spends two days a week feeding them and regularly checks on them under the highways and on the street.

Throughout her experience engaging with the homeless community, she’s developed deep relationships. One experience that stuck with her was when a homeless man approached her car. She rolled down her window and put her left hand outside.

The man didn’t ask for money. He didn’t ask for food. He took her hand, and told her how he had spent the day working, and how lonely he was. She got his name, and he went into the woods toward the tent where he lived. Tragically, she learned in the next day’s obituaries that he had died from an overdose.

“I realized I was the last person that had seen him,” Knotts recalled.

The man hadn’t asked for any money or any food, he was just in terrible circumstances, Knotts said.

Another homeless man who Knotts befriended had no legs and was in a wheelchair. While at first, he was a little apprehensive to speak with her, a friendship developed. One day, his blanket slipped off and Knotts noticed a knife. He told her it was the only way for him to protect himself. Knotts visited with him regularly for the last year of his life before he too died from an overdose.

“[We were] two people [from] opposite ends of the world. We became very good friends,” she said. “I mourn him. I really do. He asked me for very little, and he gave me so much.”

Knotts learned a lot from her experiences with the two men, and from the homeless in general. She discovered that underneath everything, people are the same. We’re all human beings.

“Humanity is what binds us,” Knotts said.

She also learned how kind, generous, and resilient the homeless can be. She would give a sandwich to a homeless man or woman, who, in turn, would give the meal to another homeless person who was in greater need. Above everything, she learned how everyone really just wants to be loved.

Society often blames the homeless for their situation, but there are many causes for homelessness, Knotts explained.

While some have been abandoned by their families or abused, others struggle with drug and alcohol abuse, or suffer from mental illness. Many are employed but aren’t able to earn enough to afford housing. Others have no access to education or have been released from prison, which makes it even more difficult to find a job. Occasionally, a traumatic injury leaves a person unable to work. Natural disasters also can force people into the street.

“There are so many reasons and we have to look at each one of those homeless people and say ‘What is their issue? Why are they here, and how can I help them as an individual?'” Knotts said.

Society largely ignores the homeless population because the situation is ugly, and people put the issue out of their minds. Furthermore, it’s difficult for the everyday person to imagine becoming homeless.

However, all it takes is one catastrophic event to force an individual onto the street. For example, Knotts was in a homeless camp and encountered a young boy. He asked if she recognized him, and she didn’t. In fact, he had been one of her students.

“It’s not just the lower class, or the uneducated, that becomes homeless. We could all—with one little slip—become homeless,” she said.

Having written for the Austin American-Statesman since 2008, many of Knotts’s articles have focused on homelessness. In an effort to bring attention to the issue, Knotts compiled a series of 34 articles and short stories into a book, titled “You Are My Brother: Lessons Learned Embracing a Homeless Community.” She hopes that readers begin to better understand the homeless in their cities, and how to help.