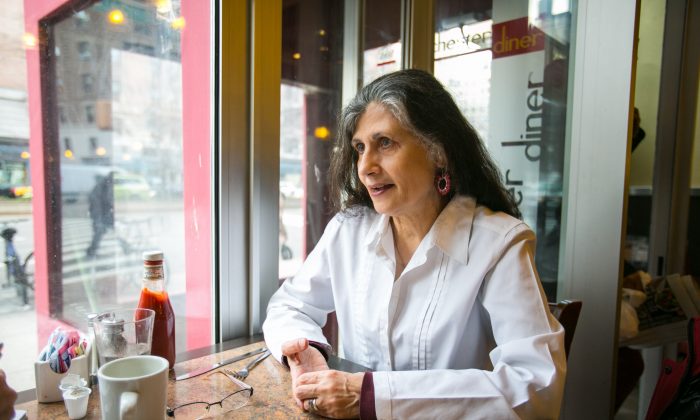 A Messenger of American Indian Culture

NEW YORK—The desire to preserve and pass on authentic teachings from America’s indigenous people is embodied in Yvonne Wakim Dennis.

It is perhaps a fitting passion for a Cherokee Bird Clan member. Members of the Bird Clan were traditionally known as messengers between earth and heaven, according to the Cherokee Nation website.

“A lot of people don’t know their clan, so I feel fortunate,” Dennis said.

Dennis started working in education in the 1970s, but it has been challenging to promote American Indian culture in a meaningful way in today’s society and schools, she said.

She was a founder of Nitchen, a nonprofit founded in 1993 with a goal to rebuild healthy families. Nitchen means “our children” in the language of the Lenape, the predominant tribe in Manhattan 400 years ago.

Nitchen was able to provide assistance to indigenous families based on traditional modalities.

“The traditional Native way of looking at things is that health is never just in one place. Maximum health is when you’re balanced spiritually, physically, emotionally, and mentally—it’s all one,” she said.

“Native people are not comfortable in the public mental health system, which doesn’t understand intergenerational trauma.”

An Indian Country Media report describes intergenerational trauma as “trauma experienced by earlier generations that can influence the structure of our genes, making them more likely to ‘switch on’ negative responses to stress and trauma; and via the actual lessons handed down—or not handed down—as a result of [systemic] trauma, such as Indian schools, alcoholism, and sexual abuse.”

Within their membership, every mother who had been on public assistance now has a college degree, and children who had been institutionalized are now living back at home, she said. But following changes to funding requirements in 2012, the only original part of the program that remains is the women’s power time circle.

“We started inviting non-Natives about 10 years ago,” she said. “We write, we laugh, we cry, we pray.”

“The way that I was raised is that you have to give back,” she said.

She has worked to try to get the Native American education program back into New York City schools. It originally ran from 1974 until around 1996. But, she said, there is an unwillingness on the part of education officials to reinstate it.

“Of course, all the pictures in the books are showing Indians as savages and maniacal, bloodthirsty killers. Never as defenders of their homelands,” she said. “But at least we’re getting some good materials into the hands of teachers through our school program.”

Little credence is given to American Indians for their sophisticated system of governance and justice, their early agricultural science, or their sustainable practices. For example, many tribal nations followed the practice of letting the first catch go when hunting, as a simple practice of sustainability.

She currently helps educate children through the Children’s Cultural Center of Native Americans (CCCONA), of which she is the educational director.

The program delivers a good starting point for children, but it’s not enough. “It’s planting a seed,” she said.

Not everything can be learned in one school. That was one of the messages imparted at CCCONA’s program in Harlem on Jan. 12.

More than 100 schoolchildren from three different grades visited to learn about Native American Indian culture in the two-hour program, which included a puppet show.

“I send home as much as possible an understanding that our elders are important to respect because they can teach us so much,” said Vida Landron, who has been working on the program for five years.

Landron is of Taino and Powhatan heritage and is passionate about preserving the legacy of Native Americans and sharing it with children. “First Nations people have been sort of erased from history,” she said.

Landron is adamant that today’s people, of all backgrounds, would do well to live by the main principles that have guided many Native American people through the ages.

She also advocates caring about one another. “Even though you may not be related, there should always be a sense of community, or tribe, or clan,” Landron said.

Beginning to educate yourself about American Indian history and culture is as simple as reading books and going online, said Dennis.

She has co-written several books. Her latest, “Native American Almanac,” was published last year and is a comprehensive historical overview of Native communities in the United States. More briefly, it also covers indigenous people throughout the rest of North America and contains many helpful resources.

The key is to “listen first, then ask questions,” she said. If you’re attending a Native event—especially one that holds spiritual significance—she suggests to go one step further and “keep your lips zipped.”

She believes non-Native people shouldn’t do Native rituals, such as smudging, for example. But, if you’re not sure what’s appropriate, always ask for permission first, she suggests.

Understanding the culture can also be complicated, because tribal nations can differ on views and beliefs. There is a famous image of an American Indian man hunched over on his horse called “End of the Trail”—many tribes see this as a symbol of genocide and defeat, while others love the image, Dennis said. The image has also been interpreted as a symbol of resilience and strength of the warrior, of honor and determination.

The Lenape called Manhattan “Manahatta,” which has different meanings—some say it means “Hilly Island” and others say it means “Place of Sitting Down.”

“Everyone has a different view. Just look at it all,” Dennis said. “And it’s OK not to know. We don’t have to know everything in its entirety.”

6.6 million: The nation’s population of American Indians and Alaska Natives, about 2 percent of the total population.

82.7 percent: The percentage of the American Indian and Alaska Native population age 25 and older that had at least a high school diploma, GED certificate, or alternative credential in 2014; compared with 87.1 percent of the overall population who had the same.

26.6 percent: The percentage of single-race American Indians and Alaska Natives who were in poverty in 2015, the highest rate of any race group. For the nation as a whole, the poverty rate was 14.7 percent.