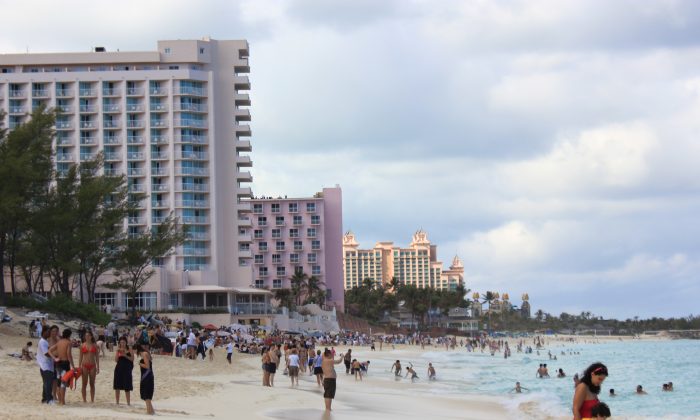 A Memorable Weekend in The Bahamas

What struck me first about The Bahamas was the friendliness of its people. Arriving in Nassau on New Providence Island with my husband, we were greeted in the airport arrivals hall by a local band playing folk songs and welcoming customs officers, followed by the most pleasant taxi ride we have had in a long time.

Chatting with our driver James about everything from the weather forecast (sunny, no rain) to the best tips for local food (Frankie’s, for the conch fritters) and souvenirs (Straw Market for shopping and rum cake), the 25-minute ride into Nassau passed in the blink of an eye and we were at our destination: Graycliff Hotel.

Graycliff Hotel is an icon in Nassau. Originally built in 1740 by famous pirate Captain John Howard Graysmith, it became Nassau’s first inn in 1844, before hosting such nobility as the Duke and Duchess of Windsor, Lord Mountbatten, and Sir Winston Churchill. Graycliff conveys a mysterious, nearly melancholic atmosphere—a house detached from time, a piece of England far away from home.

This was our first trip to the Caribbean and while we didn’t really know what to expect, we were certainly hoping for vast white beaches, crystal-blue water with tropical sea life, and a slower pace of life.

Like a scattered string of pearls, the islands of the Bahamas stretch alongside Florida about 500 miles across the Caribbean Sea. Only a small number of the 700 islands are inhabited and Nassau, the capital, is home to around 70 percent of the 350,000 Bahamians. What used to be a sleepy, quiet town is now the economic, political, and infrastructural hub of the nation and the narrow streets can be crowded at times.

Outside the market we were approached by a local man selling coconuts from the back of his car. Deftly wielding an impressive machete, he beheaded a coconut and offered the delicious coconut milk with a straw to my bemused husband, who clearly would’ve liked a go with the machete himself.

After the first sip, for $5 a generous portion of gin was added to the cocktail by the friendly vendor, and the sun seemed somewhat even hotter for the next hour or so.

The beaches in downtown Nassau are small, crowded, and devoid of the white sand we were associating with tropical islands, so we opted for a day trip to Blue Lagoon Island.

After a scenic boat ride through Nassau’s historic harbour, we reached the private island which for over 60 years was owned by the McCutcheon family. John T. McCutcheon was The Chicago Tribune’s chief foreign correspondent and a Pulitzer Prize-winner who named the property Treasure Island. It was known by that name for decades until it was sold to the current owner in 1979.

The white beaches, turquoise waters, and swaying palm trees on Blue Lagoon Island surpassed all my expectations and I enjoyed a day of lying in a double hammock and reading, while visitors around me snorkelled, kayaked, or tried the paddleboats.

Another, closer choice for a day on the beach is Paradise Island, which is connected by a toll bridge and ferry boats to New Providence Island. This is the island of millionaires’ villas, beach clubs, and the mega-resort Atlantis.

There’s plenty of choice for eateries in downtown Nassau, but following James’s advice, we made our way to Frankie’s—full name Frankie Gone Bananas. Sitting under the palm roof on the balcony, we tried local specialties such as fresh grouper and the famed conch fritters, which were delicious. Conch shells also constitute a popular souvenir and sell for about $10 (the Bahamian dollar is pegged to the U.S. dollar on a 1:1 basis and you can pay in USD).

The Bahamas’ colonial past is present everywhere, from the architecture to the red post boxes outside the Parliament buildings and Queen Elizabeth’s portrait on the legal tender. The island nation has been part of the Commonwealth since 1973, and English remains the national language.

Our long weekend was over too soon, and when James drove us back to the airport I glanced at the wide blue ocean for the last time, thinking about the rum cake stowed safely in my luggage.

On a cold winter afternoon I will let the sugary, moist delicacy melt in my mouth. I will close my eyes, and it will take me back to the white beach, turquoise waters, and swaying palm trees of Blue Lagoon Island.

Wibke Carter is a world traveller who hails from Germany, has lived in New Zealand and New York, and presently enjoys life in London.