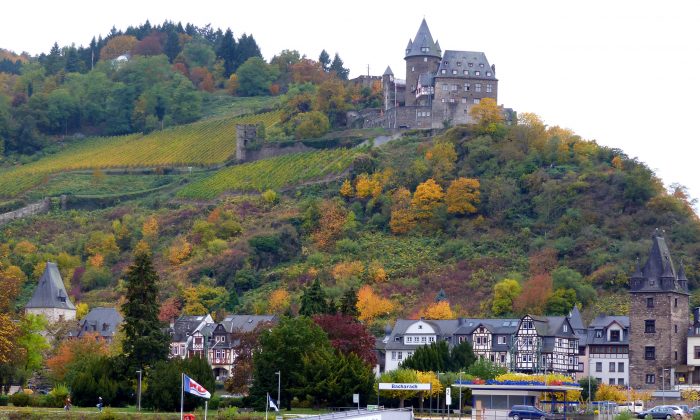 Our 13-day Uniworld boutique river cruise on the luxurious River Queen began in Amsterdam. After a must-do canal sightseeing cruise and a visit to the world-class Rijksmuseum, we set sail for Cologne, the oldest major city of the Rhineland.

There, our brightly painted tourist train wound through the Old Town and ended at the renowned Cologne Cathedral. The façade of the cathedral, with its monumental spires appearing to nuzzle the deep blue sky, was a sight to behold.

Next to the cathedral is the Roman-Germanic Museum, home to the world’s largest collection of ancient Roman glass vessels. The museum was constructed around its almost flawless Dionysus mosaic floor, the remains of a Roman villa. Since the Rhineland was founded by the Romans, the four countries we visited during our cruise—Netherlands, Germany, Luxembourg, and France—have many archeological treasures from that period.

Koblenz was our next port of call and the point where the Rhine and Mosel rivers part ways (“Mosel” is the German spelling). At the confluence, called German Corner, is a massive equestrian statue of Kaiser Wilhelm I who in the 19th century united the country.

In the few days since leaving Amsterdam the autumn foliage had reached its peak phase and hillsides were ablaze with colours ranging from gold to scarlet as we maneuvered the river locks. Watching the River Queen crew squeeze the ship through the narrow locks and under the low-lying bridges was fascinating.

The Mosel Valley has picture-perfect small towns fronting the river, alternating with grapevines planted in precision climbing the surrounding hillsides.

The Mosel Valley has picture-perfect small towns fronting the river, alternating with grapevines planted in precision, climbing the surrounding hillsides like soldiers marching in formation. This is after all the land of Riesling wine, and until you have tasted German Riesling you have not tasted the nectar of the gods.

Each town has its own charm, but the overall impression is one of narrow cobblestone lanes and ornate and/or humorous identification signage that dates back to a time when most people were illiterate and the only way to find the butcher, baker, or candlestick-maker was by visual iconography. Even private residences were located by the visual cues of “blue door 3 buildings down from the shoemaker.” While the signs are no longer needed to mark a destination, they nevertheless add great pleasure to exploring the old towns, where many of the original signs still exist.

Other intriguing features common to all the towns were public fountains that ranged from the artistic to the bizarre, and the ubiquitous half-timbered houses. Wood was a cheap but highly flammable building material, and if a house caught fire the whole town could go up in flames. One way to overcome the fire hazard was to build alternating wood with stone. Since stone was an expensive commodity, only the wealthy could afford to build entirely with it. We visited one striking example, the 11th-century Reichsburg Castle in Cochem.

In the 16th-century village of Ediger-Eller, which boasts the steepest vineyards in all of Europe, we were treated to a tour by the mayor dressed in medieval robes and a wine-tasting at a local tavern.

The trip took a patriotic turn when we crossed into the tiny country of Luxembourg and visited the Luxembourg American Cemetery and Memorial where General George S. Patton still commands his Third U.S. Army. He is buried at the head of the graves of the 5,000 U.S. military personnel who gave their lives liberating Luxembourg.

Reversing our course on the Moselle we returned to Germany and the oldest city of Trier, which in ancient times was the largest Roman settlement north of the Alps.

On to Bernkastel and the very heart of the most prestigious wine estates, including that of Dr. Pauly Bergweiler, where we were invited for another wine tasting. Their top-rated Bernkasteler wines come with an ancient legend that recounts that one sip of wine from this estate “brought a prince back from the brink of death.” True or not, the wines are considered to be some of the best in Germany.

Once again linking up with the mighty Rhine we stopped at the charming towns of Boppard and Rüdesheim in the 40-mile Upper Middle Rhine Valley, now designated a UNESCO World Heritage Site for its castle-dotted landscape and elegant scenery.

After visiting the town of Speyer we passed into the Alsatian towns of Strasbourg, Kaysersberg, Riquewihr, and Colmar. The latter is considered by some to be the prettiest town in the world. Well, superlatives aside, Colmar is indeed as pretty as they come.

Here you will find delightful rows of pastel-coloured, half-timbered houses bedecked with flowers, and meandering canals with stationary but nonetheless picturesque houseboats. Flowers are everywhere in Colmar, gracing the town with their colour and fragrance. I was seduced by Alsace and can easily see why this desirable area has been see-sawing between France and Germany for eons.

Our cruise ended in Basel, Switzerland, where we boarded a Rail-Europe train to Zurich, the final stop on our trip.