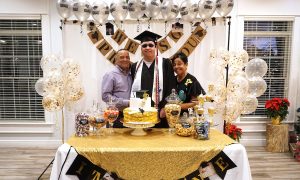 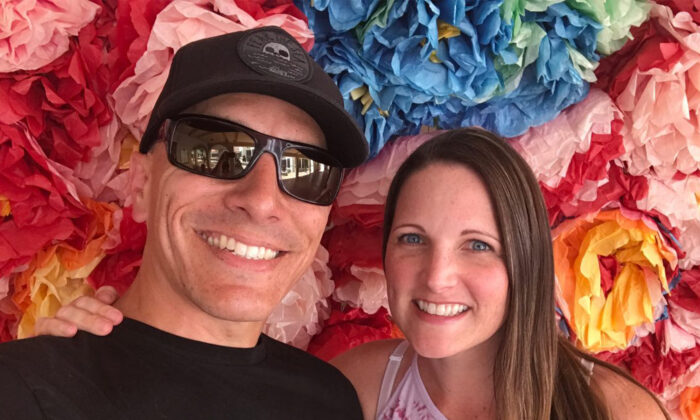 One Marine Corps veteran served two tours in Iraq, and severely injured his back. However, he returned home from his last tour only to be wounded again at home. Nevertheless, he was able to heal, and he found the love of his life in the process.

Calvin Smith is 38 years old and lives in Vista, California. He joined the Marine Corps in 11th grade, and officially started his service at age 19.

“I joined just because I wanted to serve my country,” Smith told The Epoch Times.

Several generations on his father’s side had been in the military, and he knew he wanted to be a Marine since elementary school.

“First tour was exciting, scary, fun all at the same time,” Smith remembered.

There were some understandable low points, particularly when Smith lost some of his fellow Marines. However, the camaraderie he felt with his Marines helped him stay the course.

During a patrol, Smith severely injured his back when his Humvee slid into a tank hole that was 15 feet deep.

His vehicle went from going 40 miles per hour to zero, and he hit his head on the roof of vehicle, herniating discs in his back.

When he returned, he found his extremities were going numb as a result of his herniated discs. Smith underwent a spinal surgery in 2005, and six months later he redeployed.

In 2006, the situation on the ground was a little more precarious. Smith didn’t know who to trust, and improvised explosive devices were commonplace. Despite the successful surgery he had in 2005, he re-injured his back on this deployment.

Smith was medically discharged from the Marine Corps in March 2010, and was on his way back home after receiving his paperwork when the unimaginable happened.

He was riding his motorcycle, and encountered another motorist who tried to change lanes. The motorist became angry quickly, and started exchanging words with Smith.

Smith blew him a kiss, and that irritated the driver. He lost control of his car, and hit the front of Smith’s motorcycle, which knocked Smith into the fast lane.

Another car hit Smith, crushing his leg between the motorcycle and the car. He was then tossed into the air, hit the guardrail, slid down the pavement, and then became entangled in the guardrail.

Smith’s tibia and fibula had been shattered, his ankle and wrist were broken, his bicep had been punctured, and he sustained a concussion.

For the next few years, he tried to adapt to his injured leg by using a cane. Then he started using a walker, and his hip and back started to get worse.

“I was pretty angry. It was a rough time anyways. I was not happy with my relationship, I was getting kicked out of the Marine Corps,” Smith said. “It was a really rough time for me. It’s probably one of the hardest times I’ve had.”

After his accident, Smith had gone to speech, physical, and occupational therapy for eight months. During that time, he was in the process of going through a divorce. However, he began to fall in love with his speech therapist Kristina.

“She just has this aura around her to me. She just has this thing about her that I just loved. She’s positive, and she’s goofy, but yet serious when she needs to be. She’s smart, but she can be silly and just crazy and weird. She’s beautiful. She understands me. She accepts me for who I am,” Smith said.

After his therapy was complete, they got together and began dating. The two were married in December 2010.

Smith had a surgery to remove a calcium deposit on his foot, and met another veteran who was about to have an elective leg amputation.

Within 45 minutes of speaking with him, he decided he wanted to have his own leg amputated. After trying to cope with his injured leg, after multiple surgeries, Smith had dealt with enough struggle and pain.

Smith underwent a successful amputation in 2014. The first day he received his prosthesis, he was walking around, running, and was allowed to go home.

“Now that my leg’s amputated, it’s like night and day, man. I feel so much better. My hips are better. My back is better,” Smith explained.

Smith and his wife began discussing fitness; Smith was 200 pounds at the time. Kristina suggested Pilates, and Smith decided to give it a try.

Smith found a Pilates studio close to their home, and the first time he went he walked in using a cane. Within three months, he started feeling better. Within 10 months he had lost 50 pounds.

Before he started Pilates he was unable to get out of bed or tie his shoes by himself, and his wife was his caregiver. Now, he’s able to do these activities on his own.

“I’m just much happier. I’m stronger. My core is way stronger, which is what my biggest issue before was, because my back was so messed up I felt I couldn’t work out my core out properly. But I just didn’t know how to work it properly, which was my problem, and Pilates helped me find that out,” Smith said.

Smith is able to do pull-ups, sit-ups, and goes hiking with his kids every weekend. Pilates also helped Smith psychologically.

He wasn’t happy with himself and his body, and the exercise helped him realize that he was being too hard on himself, and Pilates has allowed him to have a more positive outlook on life.

Smith became a Pilates instructor two months ago, and wants to help other veterans and civilians who have been injured or wounded.

He’s been able to help one woman lose 70 pounds for her daughter’s wedding, and has helped fellow veterans overcome their own back injuries. He’s also been able to help people with scoliosis who are now able to be more active with their loved ones.