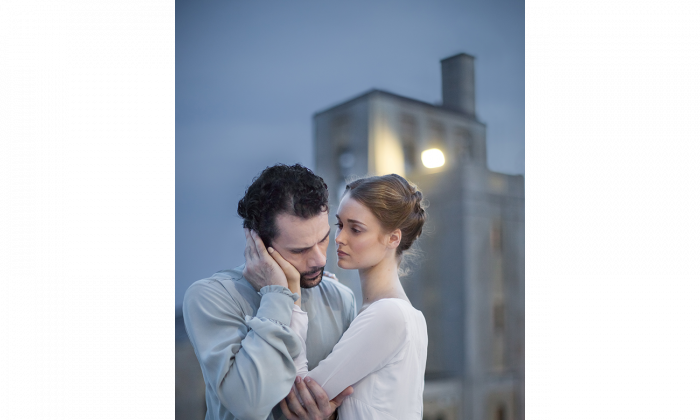 Hannah Fischer and Piotr Stanczyk will dance in “The Winter’s Tale,” which opens at Toronto’s Four Seasons Centre for the Performing Arts on Nov. 14, 2015. (Karolina Kuras, courtesy National Ballet of Canada).
Arts & Culture

A Look Inside The Winter’s Tale

TORONTO—Dancer Hannah Fischer is challenging audiences to consider, “Would you forgive somebody who’s been cruel to you and after 16 years asks for forgiveness? Would you give it to them?”

The second soloist with the National Ballet of Canada is getting her big break, performing the opening night of “The Winter’s Tale,” a three-act ballet drama by British choreographer Christopher Wheeldon. The ballet is making its North American debut on November 14 at Toronto’s Four Seasons Centre for the Performing Arts.

A co-production with England’s Royal Ballet, the “The Winter’s Tale” is based on Shakespeare’s stormy play of the same name. It first premiered in April 2014 at the Royal Opera House and earned both critical and audience acclaim for its dramatic intensity and reflection on human nature.

Wheeldon flew to Toronto to assist the dancers in mastering his choreography, something Fischer is particularly grateful for. “He’s so clear on what he wants in his vision … he knows exactly what [the ballet] is about and what movement is going to showcase that emotion best,” she says.

Being onstage is really about showing who you are and what you love.
— Dancer Hannah Fischer

Fischer’s character Hermione is the Queen of Sicilia, a vibrant young woman accused unfairly of adultery by her jealous husband Leontes. This role is danced by principal dancer Piotr Stanczyk on opening night.

Fischer believes “The Winter’s Tale” will be a cathartic experience for audiences. “I think Hermione forgives Leontes in the end and I think that really brings out such a relief of emotion,” she says.

“When I dance with Piotr and I look into his eyes, it’s something I feel I have to do,” she adds. “Just [from] the way he tells the story and the way his heart aches and he knows how much wrong he’s done, I can see why she would be torn—I can see why I’m torn.”

Although she hasn’t gone through the trauma her character experiences, Fischer can relate to the experience of losing control of her own life; at the age of 15 she was diagnosed with Graves’ disease, which affects the thyroid.

“In a matter of a month, so much had changed. I thought I wouldn’t be able to have a career anymore doing something I loved,” she says.

“I fought to get healthy from it, and [Hermione] fought to prove her innocence, so that fight and that desire to overcome what you can’t control makes you strong, and she’s such a strong character. She knows that no matter what, she will always be queen.

“No one can take that dignity and that title away from her because she is a queen throughout. It’s not just put on—she is through and through the queen, and she fought for that, and I had to fight to do what I love.”

For Fischer, ballet is something that is part of her. “I couldn’t picture myself doing anything else … it was just something I had to do.”

In explaining the experience of performing, Fischer says she feels “totally alive” when onstage. “Being onstage is really about showing who you are and what you love. That’s such a freeing, such a rewarding thing to be able to do.”

She believes the audience can benefit from that as well.

“There’s just something really joyous about watching somebody love what they do. It’s inspiring and it’s fulfilling, and I think it satisfies your soul. I think it makes other people want to find something else that they find really satisfying.”

Although slightly nervous, she is looking forward to her debut opening night.

“I don’t want to regret anything, so I’m just going to give it everything I have, and I think, no matter how it goes, you can’t be disappointed with that.”