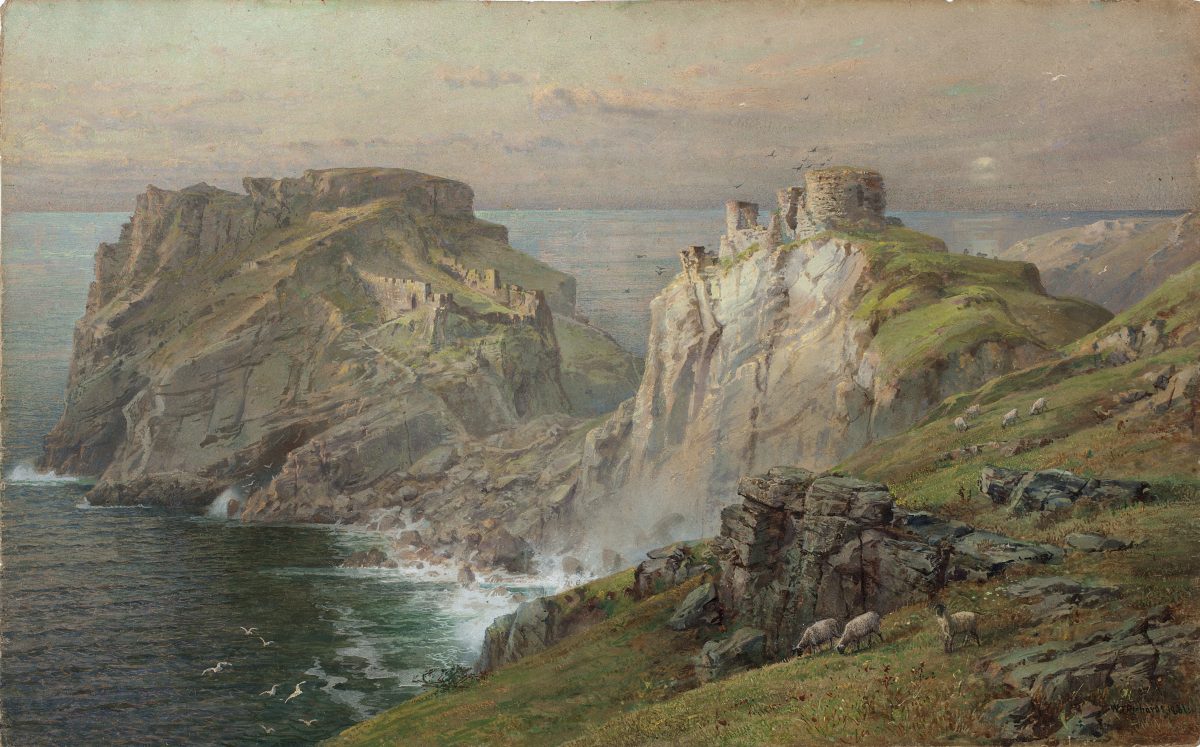 "Tintagel," 1881, watercolor on paper mounted down to board by William Trost Richards (Image courtesy of National Academy Museum)
Arts & Culture

NEW YORK—How could staring at a canvas barely two square feet transport a person to the hillsides of Pennsylvania or the glass-like waters of Lake Placid? How could a painting of a farm that existed 150 years ago feel so viscerally real and immediate?

This is the genius of William Trost Richards, a 19th century American landscape painter. His skill is as great as his heroes Thomas Cole and Frederic Edwin Church, though to this day the public has not given him the same degree of recognition.

A small selection from Richards’s work is showing at the National Academy Museum on the Upper East Side until Sept. 8.

“William Trost Richards: Visions of Land and Sea” is a visual and intellectual treat. And the fact that the exhibit is at the National Academy Museum gives the added satisfaction of discovering a hidden gem.

What’s remarkable about this show is the cohesiveness in the artist’s oeuvre. Richards’s handling of colors, the fineness of his brushwork, and the subtle transitions of light across the topography are all superbly done—consistently. If there were such a thing as batting averages for painters, Richards’s would be extremely high. Even his sketches, used as preparation for larger final works in oil or watercolor, are done with the same high level of care.

A portrait of the artist at work by his daughter Anna Richards Brewster starts the exhibit. A small piece, it is done lovingly and adroitly. The 1892 portrait depicts his Newport studio and shows Richards, all buttoned up in a dark suit, lifting a brush to a seascape.

Curator Bruce Weber included the piece, the only one in the gallery not by Richards himself, as a tribute to the relationship between the family and the museum.

In 1954, two years after Brewster’s death, her family came to the National Academy with her collection. Richards had given an equal share of his studio works to each of his five children, and Brewster wanted her share to be given to American museums.

“The ’50s were a dark time for 19th Century American art, just in the lay of the land and people’s general interest,” Weber said. “In that time, the Academy was looked upon as a safe haven for 19th Century work.”

This was a time that museums were selling their earlier American art, Weber said. Abstract expressionism and pop art were the flavors of the decade. The academy was approached by the families of other 19th and early 20th century painters as well. The National Academy received such works—hundreds of them—and in the endeavor fulfilled Brewster’s wish of dispersing her father’s art for the public to enjoy.

Richards’s pursuit of accuracy of natural forms is apparent throughout his painting process. He often brought his sketchbook as close as he could to the water’s edge.

He once wrote to a patron about being on location for a seascape:

“I watch and watch [the ocean], try to disentangle its push and leap and recoil … and am always startled out of my self-possession by the thunder and the rush—jump backward up the loose shingle of the beach, sure this time I will be washed away …”

Many of the paintings in this exhibition are on the smaller end of the spectrum, many no wider than a forearm is long. This is not necessarily a reflection of Richards’s working preferences, simply a reflection of the museum’s collection, said Weber.

Richards did work large—and when he did, the effect is breathtaking.

“Tintagel,” 1881, is a larger piece done of the ruins of Tintagel in Cornwall, England. It’s beautiful, like his other works, until you realize that it is done in watercolor. Then it’s mind-blowing—even in a looser medium he still retained full control of each element. Rocky cliffs rise up over the Atlantic, hiding in their jutting forms remnants of an old fort. It is painted from a soaring perspective, yet you see every seabird, each grazing sheep.

That’s one of the amazing things about Richards. He’s able to include so much detail, even in the background, without distracting the viewer’s focus on the foreground, or his grasp of the scene as a whole. It’s what makes his paintings so interesting to look at—seeing one of his landscapes up close, and then from far away, I almost feel as if I can mentally “walk” the terrain because Richards has already informed me of all the slopes and trails that lie in any direction.

The surfaces of most of the oils shown are smooth, but one painting, “Sea and Sky” circa 1865–1875, was done in eye-popping impasto. Blazing reds of a sunset break through the clouds as waves break on a group of rocks.

Hung right next to it is another seascape of similar size, but smooth. Yet the clouds and foreground brambles give the piece as much texture as its neighbor. This juxtaposition highlights just how much Richards was the master of his paints.

Throughout his life, he stayed true to his vision and aesthetic, but was not blind to trends among younger painters. Toward the end of his life, his brushwork became looser and his color range less nuanced, perhaps an influence of the French Impressionists, perhaps a compromise with old age.

The Man Behind the Masterpieces

One thing that’s conspicuously missing from this exhibition is a sense of who this master was. Was he a careful, maybe even neurotic man, as his attention to detail may suggest? Or was he broadminded and loving?

We know he had five children, traveled back and forth between the United States and Europe, had a loyal following of patrons, and other facts concerning his activities. But what drove him and how he thought of his world is hard to discern.

The only person who Weber thinks has a relatively full grasp of Richards as a person is art historian Linda Ferber. Ferber, the outgoing vice president and director at the New-York Historical Society, discovered Richards as a young assistant curator at the Brooklyn Museum.

It was the 1970s, and Richards was largely regarded as a marine artist. After delving deeper into his life and career, Ferber decided that she needed to show the painter’s long career as a landscape painter in addition to his marine subjects. In 1973 she put on a retrospective show at the Brooklyn Museum. It was the only time to date that anyone had ever pulled his career together in a monographic exhibit.

With the help of one of Richards’s granddaughters, Ferber accessed Richards’s letters. Slowly she developed a sense of him as a person.

“I consider him nature’s nobleman,” she said. “He was born in 1833, came of age in 1850s, and died in 1905—he lived to see changes in culture and taste. He had gone through all the vicissitudes of life. Through all of it, he was a beautiful writer. He was raised with old-fashioned values. He was conservative but open—a very sympathetic figure.”

Ferber describes Richards as a “poet in paint” but he was also a scientist. He was genuinely curious about the natural world he depicted and studied geology. His relationship to his subject—the land—was deep.

“He believed that American landscape is a subject permeated in national and cultural values,” Ferber said. “He was part of the last generation of artists to see that attitude begin to shift.”

Since that show and dissertation, Ferber has continued to study Richards’s life and work. To her, he’s a fascinating artist who is too little explored in American art history.