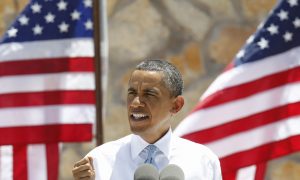 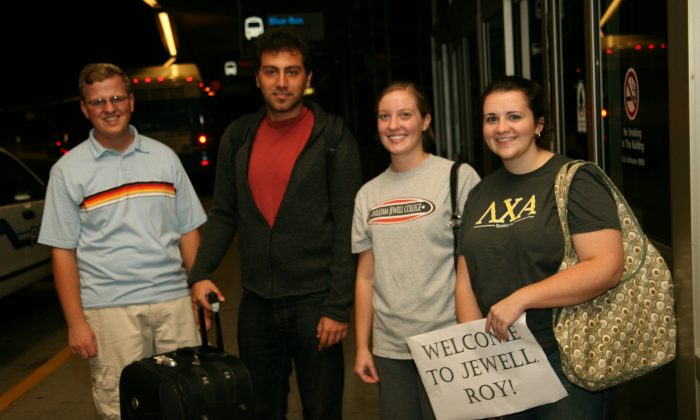 Roy Abdo (2nd L) with the students who picked him up at the Kansas City, Missouri airport in July 2006. (Courtesy of Roy Abdo)
People

Roy Abdo left Lebanon in 2006 to study abroad for three weeks in Greece. However, while he was gone the 2006 Lebanon War had broken out. Lebanon’s international airport had been destroyed, and Abdo was unable to return.

“I felt like incapable. I felt things are just happening beyond me, and it’s above my control and I can’t do anything about it,” Abdo told The Epoch Times.

Immigration has been a controversial, even divisive issue in American political discourse. There has been much coverage of illegal and undocumented immigration, but not as much focus on the stories of immigrants who went through the arduous journey of becoming an American citizen.

Abdo found himself stranded in Greece, and spent several weeks sleeping on friends’ couches. He was struggling to figure out what to do, and he was running out of money.

Fortunately, the director of his abroad program had met another program alum who had been a student at William Jewell College in Missouri. They called the president of the college, explained Abdo’s predicament, and the president ultimately offered him a full scholarship for one semester and plane ticket.

In July 2006 Abdo got on a flight and arrived in Kansas City, Missouri with $30, one bag of luggage, and a Nokia cellphone. As he was walking out of the airport he saw a a sign that said “Welcome Roy.” People from the college had come to pick him up.

“I was blown away by Americans, how they were nice to go even pick me up from the airport without even knowing me. I felt a sense of safety,” Abdo recalled.

After a semester at William Jewell College, he traveled to Washington, D.C. to spend a semester at Georgetown University. However, this time he did not have a full scholarship and he was broke.

Fortunately, the resourceful Abdo found a paid internship to supplement his scholarship.

Abdo started a blog recounting his journey that featured a PayPal donation account. Within a month and a half he and the friends that helped him raised $35,000. He was then able to use the money to pay off his last semester at William Jewel College in 2008.

“The graduation was kind of like the first step for me for the bigger dream,” Abdo said.

However, he still needed to find a job to get a work visa.

He went on LinkedIn, and sent out over 1,000 messages to people trying to meet with them for advice on finding work. A company called Voice of America Middle East Broadcasting Networks ultimately hired him for an entry level position helping them expand overseas. At the same time, the media landscape was changing, and the company was trying adapt.

Abdo came up with an idea for a new department where he started helping them break down content based on interest and how people search online and on social media. It was 2010, and he finally had an H1-B visa. It would take another three to five years to get a green card with an undergraduate degree. It would only take one year if he had a Master’s degree. However, he encountered yet another hurdle.

“If I go full time to get scholarship I lose my work visa. Going part time, I can’t afford to get loans because I’m still not a U.S. citizen,” Abdo recalled.

Since he was going to school and not working, Abdo needed to figure out a way to pay for his MBA at Johns Hopkins University.

He took the case studies and projects from his classes, and turned them into actual consulting projects for different businesses. The first couple of projects he did for free, but then he started getting paid.

After he earned his MBA, he got a consulting job with Gallup Inc. in 2015. The company was trying to develop a greater online presence, and he sent an analysis to the company to get its tests to go more viral.

He began consulting with them on their digital marketing and digital strategy, and had the opportunity to meet business moguls like Bill Gates and Mark Cuban. At the same time, he had his own personal brand helping people and businesses with digital marketing.

He ultimately quit, and started his own marketing and advertising company called Digital Revamp. He and his team of eight have worked with mid-sized companies, larger companies like Gallup, and organizations like the World Bank.

Thirteen years after his arrival to the United States, Abdo became an American citizen on December 15, 2018. The process had been difficult, but Abdo had figured out how to become a citizen the right way.

“It was one of the most special days of my life. It was so touching,” Abdo recalled.