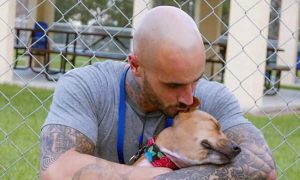 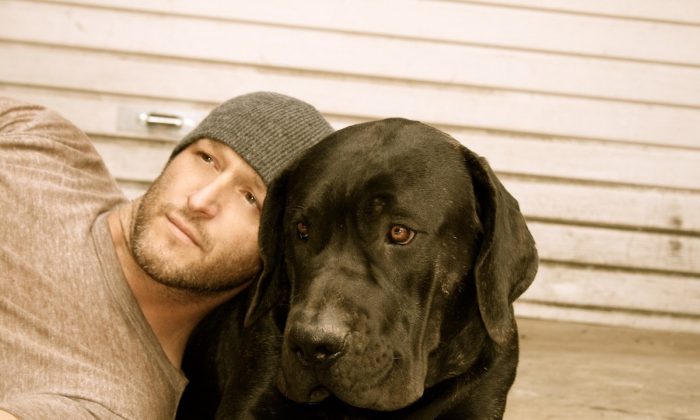 Countless dogs are abused, neglected, and homeless. Animal shelters do their best to help those in need but are often understaffed and underfunded. One man has dedicated his life to rescuing canines, and he’s often a dog’s last chance.

Kyle Schwab is a 50-year-old resident of San Fernando Valley, California, and operates a lean, effective dog rescue operation. He often works with dogs that others won’t take in.

The dogs he works with generally have behavioral problems and are aggressive toward people or other dogs.

Schwab was volunteering as security in the Laurel Canyon Dog Park in the 1980s to stop people from fighting each other or hosting dogs fights.

Schwab had a reputation as a tough guy and was known to deescalate a situation or fight if he had to.

Slowly, people asked him to start training their dogs after seeing him interact with the other dogs in the park. He commanded respect, and the dogs understood their place with him.

“It’s just something that came naturally to me with having a dominant personality,” Schwab told The Epoch Times.

Schwab would also take dogs by force from owners who were abusing them. He was formerly known as the “vigilante dog rescuer.”

He and other rescuers would post colored fliers with a photo of dogs they had trained or rehabilitated in order to find them loving homes. People began calling quickly.

Following the terrorist attacks of Sept. 11, 2001, Schwab lost all of his furniture stores and began working as a dog rescuer full-time. His rescue organization is now called Smashface Rescue.

Schwab works with dogs that nobody else will. He is the dogs’ last resort after multiple trainers have failed, and before euthanasia.

He trains his dogs rigorously in his home and ensures they won’t bite anyone once they are adopted.

He also looks for bad behavior before it happens, and preemptively trains the dogs before there’s a problem.

“Dogs live in the moment, so you have to stay one step ahead of your dog,” Schwab explained.

Schwab also takes in dogs that are severely ill and injured. If he can’t determine the cause of the illness or injury initially, he will take the dog to one of several specialists he works with after visiting his general veterinarian. He then rehabilitates the dogs in his house.

Schwab has worked with several challenging dogs. For instance, he worked with a French bulldog with an extensive bite history such that it would even bite itself.

He also worked with another dog that had been neglected and had become blind. When he first encountered the dog he became involved in an altercation with the owner. After threatening to call animal control, the owner backed off.

The dog’s eyes had retracted back into its skull to the point where they were unable to be seen. At first, they put it on an oral antibiotic and steroids.

In a particularly tragic instance, Schwab took in a dog that had been tied to the door handles of a shelter.

The dog’s throat had been slit in an attempt to kill it, and a note had been left that read “will not fight.”

He has also worked with dogs that were so aggressive toward humans that he’s not comfortable having them adopted. However, he provides sanctuary for them at his ranch. No matter what, every dog is important to him.

“Every life is precious,” Schwab said.