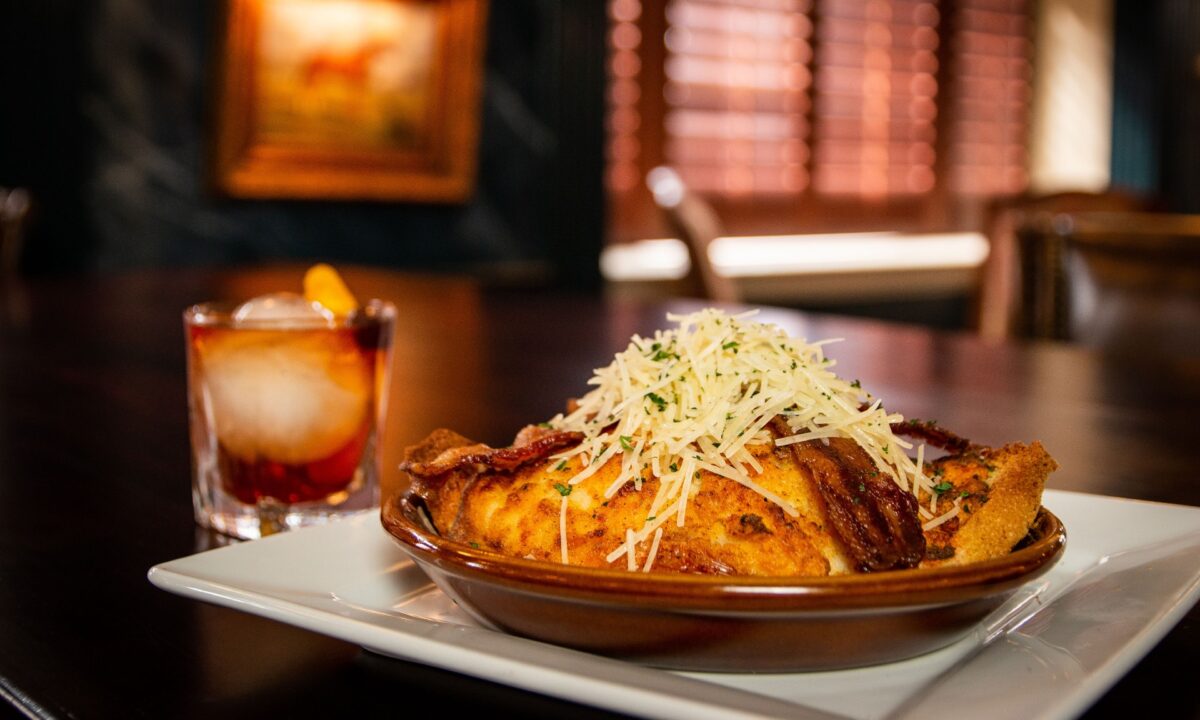 At the Brown Hotel, their famous open-faced sandwich is broiled until golden and gooey, and arrives at the table bubbling hot in a ceramic skillet, ready to be devoured. (Courtesy of the Brown Hotel)
Food

A Kentucky Classic, Hot Since 1926

It isn’t often that regional dishes cause a stir beyond their borders. But when they do, they’re usually here to stay. The Kentucky hot brown is a shining example of that.

You could argue that the dish put Louisville’s Brown Hotel on the map. ​​Often described as a cousin of the Welsh rarebit and the croque-monsieur, the hot brown is credited to the hotel’s enterprising chef, Fred Schmidt, who conceived of the open-face sandwich back in 1926.

“At that time, we had dinner dances, and when the band would go on break, our guests would routinely retire to the restaurant for a bite to eat,” said Mark Salmon, long-time Brown Hotel employee and keeper of hot brown history. Salmon explained that Schmidt’s late-night-snack invention evolved out of creative ingenuity, using “items he had on hand.”

What emerged was a rich, savory, stick-to-your-ribs dish, comprising thick Texas toast stacked with roasted turkey breast and tomato, smothered with Mornay sauce and pecorino Romano, and topped with crisp applewood bacon. The Brown’s version of Mornay sauce, a derivative of béchamel and one of the five mother sauces of French cuisine, stands out from others because of the employment of heavy cream, Salmon explained. The sandwich is broiled until golden and gooey, and arrives at the table bubbling hot in a ceramic skillet, ready to be devoured.

Patrons of the hotel knew almost immediately that the dish was something special. Pretty soon, the Kentucky hot brown became a sensation, with folks traveling from miles around to enjoy its cheesy, gooey deliciousness.

“It can be served anywhere, but people have to come here to get the original,” said Salmon, adding that it’s part of the tourism experience and that visitors sometimes make a special quick stop just to order it. “We valet park for them and when they are done, they move on to their next destination.”

The Brown Hotel knows which side its Texas toast is Mornay-ed; all employees are required to learn about the hot brown, its history, and how to make it. What may also be surprising is that the hotel isn’t shy about sharing the recipe.

“We provide postcards upon request with the recipe on them if the customer orders the dish,” Salmon said. Still, there must be something about having the dish at the place where it originated, or else the hotel wouldn’t turn out 1,000 hot browns in a typical week—unless the Kentucky Derby is in town, in which case that number triples.

These days, the Kentucky hot brown can be found all around town. GoToLouisville.com even features a Hot Brown Hop, taking hungry tourists to various places to get their hot brown fix.

Kyle Kroeger, who operates a travel website at ViaTravelers.com, said he fell in love with the Hot Brown at the Bristol Bar & Grille in the heart of Louisville. “I enjoyed it so much that I make it about once a month at home,” he said.

Salmon said there’s little not to like, and perhaps that’s the reason why the hot brown has held its appeal all these years.

In a two-quart saucepan over medium-low heat, melt the butter. Slowly whisk in flour until combined and the mixture forms a thick paste (roux). Continue to cook the roux for 2 minutes over medium-low heat, stirring frequently. Whisk in the heavy cream and whole milk, and cook over medium heat until the cream begins to simmer, about 2 to 3 minutes. Remove sauce from heat and slowly whisk in the pecorino Romano until the Mornay sauce is smooth. Add nutmeg, salt, and pepper to taste.

Trim the crusts of the Texas toast. Cut 2 of the slices in half diagonally (corner-to-corner), to make 4 triangles; leave the other 2 slices whole.

For each hot brown, place 1 whole slice in an oven-safe dish. Cover with 7 ounces of turkey. Set 2 tomato halves and 2 toast triangles in the dish around the base of the turkey-topped toast. Pour half of the Mornay sauce over each stack, to completely cover the dish. Sprinkle with additional pecorino Romano.

Place the entire dish under a broiler until cheese begins to brown and bubble. Remove from broiler, cross two pieces of crispy bacon on top, sprinkle with parmesan, paprika, and parsley, and serve immediately.

Recipe courtesy of The Brown Hotel in Louisville, Kentucky