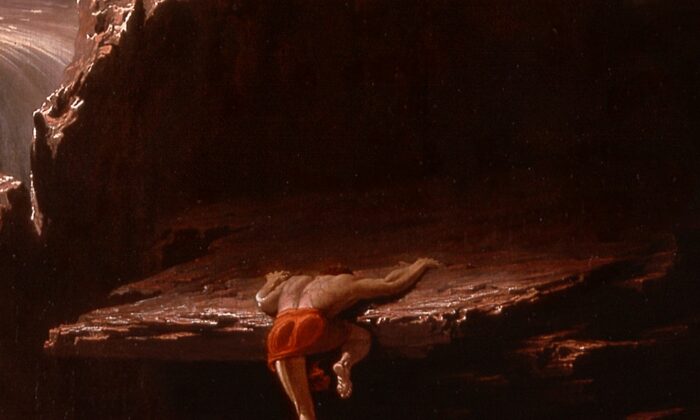 Clearly the hero is exhausted as he mounts a ledge, yet enduring faith propels him. (PD-US)
Fine Arts & Craftsmanship

A Journey of True Love: ‘Sadak in Search of the Waters of Oblivion’

Irrespective of our backgrounds, so many of us have endured what seemed like insurmountable hardship, and, somehow, we made it through.

But what were our hearts like during those hardships? What type of mindset were we strengthening and reinforcing during our turmoil? Did we let faith be our guide and love be our aim, despite our exhaustion?

John Martin’s painting “Sadak in Search of the Waters of Oblivion” captures a moment of self-discipline and endurance with the aim of true love.

‘The Waters of Oblivion’

“The Waters of Oblivion” is one of the tales from the second volume of the book titled “The Tales of the Genii,” a Persian manuscript like the “Arabian Nights.” It was initially thought to be a translated manuscript—the original highly esteemed in ancient Persia—by the ambassador from the British settlements in India, Sir Charles Morell. But all of the above information about the book was actually a farce. Instead, it was created by English author James Ridley under the pseudonym “Sir Charles Morell” and was intended to be a moral satire.

“The Waters of Oblivion” has four main characters: Amurath, the sultan; Sadak, a warrior and slave of Amurath; Kalasrade, Sadak’s loving wife; and Doubor, the chief of the eunuchs, who is also Amurath’s servant.

At the beginning of the story, Sadak and Kalasrade share a divinely deep love for one another. Their love is pure and without lust. Sadak, however, soon finds his house on fire and his wife kidnapped. He searches for her in vain.

Amurath, a jealous and lustful sultan, kidnapped the beautiful Kalasrade to take as his own. When he tries to force himself on the imprisoned Kalasrade, she resists his advances and asserts her love for her husband.

Doubor wants to help Kalasrade, but he can’t reveal his intentions lest he lose his life for undermining Amurath. So, Doubor devises a plan for Kalasrade to follow. She is to tell Amurath that she will give herself to him if he first completes the impossible task of obtaining the Waters of Oblivion. Kalasrade follows Doubor’s instructions as a way to counter Amurath’s lust.

Amurath, overcome with excitement, immediately agrees to her request. He summons the assistance of a sage to inform him about the Waters of Oblivion, and the sage tells him that the waters are on an inaccessible island filled with fatal dangers; all who have attempted the quest in the past have perished.

However, Sadak discovers the truth: that Amurath is the one who holds his wife captive. While at first resistant, it’s not long before he succumbs to the sultan’s wishes and makes the dangerous journey after learning of Doubor’s plan.

The journey is not only a trial of physical and emotional suffering but also a test of Sadak’s faith. He must endure storms at sea, a plague-torn city, fatigue, hunger, and the death of one of his sons before he even makes it to the island where the Waters of Oblivion are.

Finally arriving at the island, Sadak and his other son seem stranded and are unsure of where to go. There are jagged rocks and crashing waves everywhere they turn, and despite their efforts to shield themselves, they are battered by the elements.

At the point of starvation, Sadak’s son decides to jump into a whirlwind of water to see if it leads to the Waters of Oblivion. Sadak, worried when his son doesn’t return, follows him.

In the whirlwind, Sadak is first tempted by a mirage of pleasures, but his faith makes the mirage evaporate. He then can see the summit of the mountain and begins his ascent. He climbs all the way to the top of the treacherous terrain. There, he is greeted by a woman who presents him with the Waters of Oblivion and tempts him to drink.

Sadak tells the woman that the water is not for him but for his sultan. The woman again tries to convince him to drink so that all of his worries will disappear, and he will finally have peace. Sadak, however, refuses and essentially suggests that, above all else, he needs only his faith. The woman then congratulates him on passing the tests and gives him the Waters of Oblivion, and Sadak magically reappears before Amurath.

When Amurath demands and drinks the Waters of Oblivion so that he can finally fulfill his lust for Kalasrade, he can feel it taking his life away. He dies right then and there, and Sadak and Kalasrade are reunited. Later, their son will reunite with them as well.

To me, Sadak represents faith and virtue. He is virtuous in so far as he dares to endure the arduous journey and can maintain righteous faith throughout. Kalasrade represents pure love and resistance to lust, which Amurath represents. Thus, a fundamental interpretation of the story suggests that virtue and pure love are united only upon resisting lust: Lust is ruinous to pure love.

The Discipline Required to Reach an Impossible Elevation

John Martin, however, in his painting “Sadak in Search of the Waters of Oblivion,” focuses on a specific moment in the story. Martin depicts Sadak, after so much suffering and hardship, taking all of his remaining energy to pull himself up ever higher to the summit where the Waters of Oblivion are located.

Sadak is at the bottom center of the composition. He has just pulled himself up onto a ledge, and his body language tells us that he is exhausted. Jagged terrain and falling waters obscure his path. Lightning even appears to strike at certain points in the composition.

Light shines from the top left corner of the composition and contrasts with the darkness at the bottom of the painting. The upper illumination suggests the end of Sadak’s journey. Despite his exhaustion, he will still achieve his goal.

But what is Sadak’s goal? On the surface, he seeks the Waters of Oblivion, but why does he want it? Is it not for the sake of his wife, Kalasrade, who represents pure love and the resistance to temptation?

And how does Sadak reach his goal of pure love and resistance to temptation? He reaches it by way of faith.

In the story, the enduring faith and love embodied by Sadak and Kalasrade are contrasted with the impatient lust of the sultan. Amurath does not pursue the Waters of Oblivion out of love, but believing that it erases one’s memories, he wishes to obtain it so that Kalasrade will forget her love for Sadak and love him instead. He is unwilling to take the journey of suffering himself, and instead compels Sadak to take it. Amurath’s lust ultimately leads to his death.

True love, however, is righteous. Though its journey may be fraught with difficulties, it forges an indestructible bond not only with another human being but also in righteousness itself. Thus, Martin’s painting is not just a mere illustration of Sadak climbing a mountain, but it is a representation of how faith and love allow us to endure the impossibilities of our journey.