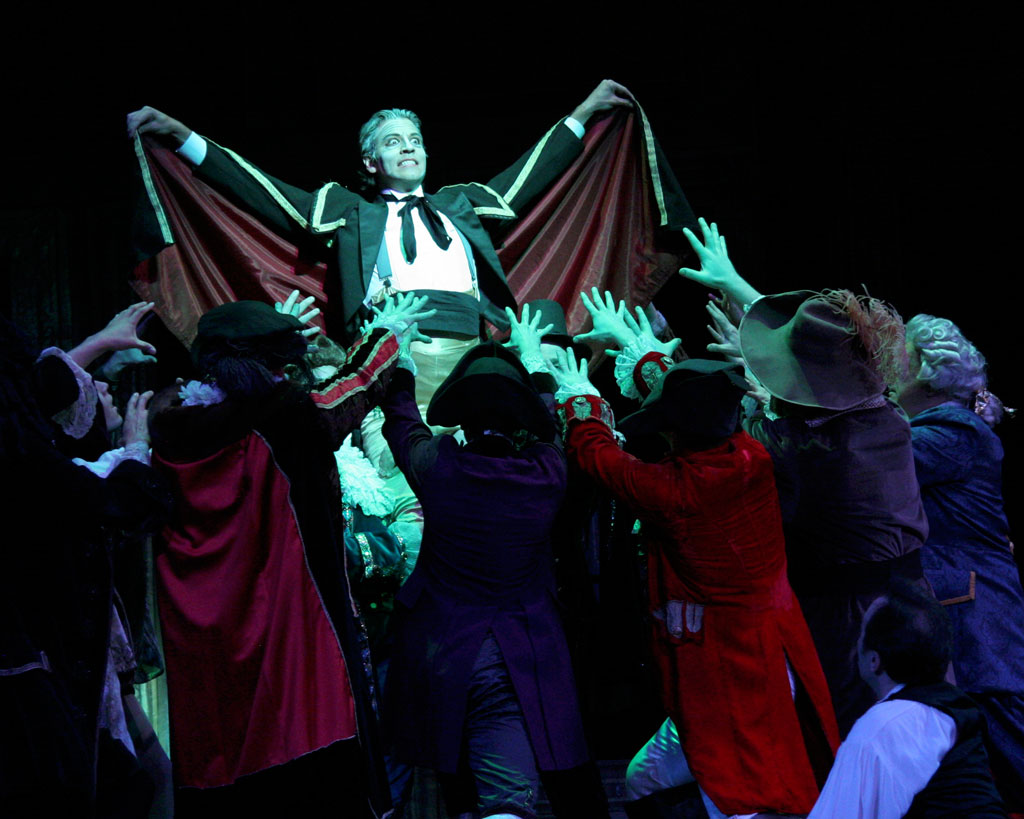 My idea of celebrating Halloween is to have someone else dress up. That’s why I chose to mark the occasion with a performance of “Ruddigore.” The New York Gilbert & Sullivan Players (NYGASP), currently in its 40th Anniversary Season, brought back the operetta for two performances during Halloween weekend.

NYGASP is one of New York City’s treasures. The company is the brainchild of conductor/director Albert Bergeret. I have been going to their productions for years and they have everything: a full orchestra, a large cast, beautiful voices, lively choreography, colorful sets and costumes and comic performances.

Why is “Ruddigore” being performed for Halloween? Because it has ghosts, witches and curses. The operetta is so linked to horror that a 1982 television version starred Vincent Price.

“Ruddigore” was first performed by the D’Oyly Carte Opera Company at the Savoy Theatre in London in 1887. Just listening to the orchestra play the overture alerted the audience that it was in for a treat.

The reason that this is not one of the more popular Gilbert & Sullivan works is probably the unwieldy plot.

“Ruddigore or, the Witch’s Curse” is a takeoff on 19th century melodramas with their mad scenes, virtuous maidens and dastardly villains.

The setting of the first act is the fishing village of Reddering in Cornwall. At the beginning, a group of professional bridesmaids bemoan the fact that there had not been any weddings for six months. What’s holding everything up is that all the eligible young men are in love with Rose Maybud, the prettiest girl in the village (Sarah Caldwell Smith). However, she is not interested in anyone except Robin Oakapple (David Macaluso), whom she believes to be a simple farmer, and he lacks the nerve to propose.

The bridesmaids try to talk Rose’s aunt, Dame Hannah (Erika Person), into marrying someone, but she has taken a vow of celibacy. She sings about how she had once been engaged to a handsome young man until she discovered on her wedding day that he was Sir Roderic Murgatroyd, the baronet of Ruddigore (David Wannen).

Hannah explains that one of Roderic’s ancestors had persecuted Satanists and a witch had issued a curse on the Murgatroyd family. She decreed that future Baronets of Ruddigore would have to commit a crime every day or they would die in agony. Since then, all the baronets had suffered a painful death because they weren’t up to the witch’s requirements.

The bridesmaids leave in disappointment and Rose arrives. Hannah asks her niece if she has any plans for marriage. The young woman replies that she is guided by a book of etiquette and the eligible men in the area are too rude or too shy. She places Robin in the second category but believes it would be poor manners for her to take the initiative. He then appears but the two circumspectly speak about their friends being in love.

Robin’s loyal servant, Old Adam (Ryan Allen), meets in private with Robin and addresses him as Sir Ruthven. Robin admits that he is the Baron of Ruddigore but urges his servant to be discreet. Robin ran away from the castle 20 years earlier and assumed a false identity to avoid the family curse.

Unexpectedly, Richard Dauntless, Robin’s foster-brother (Daniel Greenwood), arrives after having spent ten years as a sailor. Robin confesses his love for Rose and Richard agrees to act as a go-between. Things go awry when Richard meets Rose and falls in love, proposing on the spot. She accepts after looking up the appropriate entry in her book of etiquette.

The fickle young woman suddenly changes her mind when Robin, ostensibly praising his foster-brother, instead points out his flaws.

Mad Margaret (the hilarious Caitlin Burke) claims that she lost her mind because of her love for Sir Despard Murgatroyd (Richard Allen Holmes), the one who inherited the curse after his older brother disappeared. Margaret warns Rose that Sir Despard plans to kidnap her as one of his daily crimes.

Alone, Sir Despard sings of the fact that although he performs terrible acts every day, he also does good deeds. Richard reveals to Despard that Robin is really his brother Ruthven. Despard declares himself free of the curse and hands over the title of “Bad Baronet” to Robin. Despard then reunites with Margaret, restoring her sanity.

The second act is set in the gloomy portrait gallery in Ruddigore Castle where the prior baronets are depicted. Robin is uncomfortable with the obligation to commit a crime every day. His servant suggests some heinous acts, but Robin prefers minor transgressions. His ancestors come out of their portraits to express displeasure at his conduct. Robin tries to defend himself by claiming he committed such crimes as filing a false tax return. The ghosts are not impressed; one of them declares: “Everybody does that.”

They torture Robin to make him agree to carry off a lady. He sends his old servant off to perform the task but Adam comes back with Dame Hannah. Sir Roderic sees his former fiancé and reunites with her.

Robin returns and comes up with a solution to the family problem. He reasons that if the Baronets of Ruddigore can die only by refusing to commit a daily crime, refusal is a suicidal act. Since killing oneself is a crime, his ancestors should never have died. The sophistry succeeds.

Since Robin is free of the curse, Rose accepts him again as her future husband.

The operetta is very melodic. On the down side, the script is hard to follow and there are some slow patches in the early part of Act 2. That Act does contain one of the G&S’s best patter songs, the tongue-twisting “My Eyes Are Fully Open.”

The cast was excellent, with Erika Person (as Dame Hannah) confirming she is a worthy winner of the Annual Isaac Asimov Award. As Robin, David Macaluso’s articulation in the patter songs was outstanding. His acting could have used more restraint, but he was probably conforming to the interpretation of co-directors Bergeret and David Auxier. The latter was also responsible for the sprightly choreography. Daniel Greenwood (playing Richard) has a bright tenor and is light on his feet. Sarah Caldwell Smith has the looks for the ingénue role and has a sweet soprano voice.

The sets by Albere are noteworthy: a seaside village in Act 1 and the portrait gallery in Act 2, inspired by Edward Gorey. Gail Wofford’s costumes and Benjamin Weill’s lighting are also top-notch.

NYGASP has settled in for the season at NYU’s Skirball Center for the Performing Arts (566 LaGuardia Place‏). The company’s 40th Anniversary Season will continue with H.M.S. Pinafore: December 26 – December 31 and The Gondoliers: May 15 – May 17, 2015. This is highly recommended family entertainment.