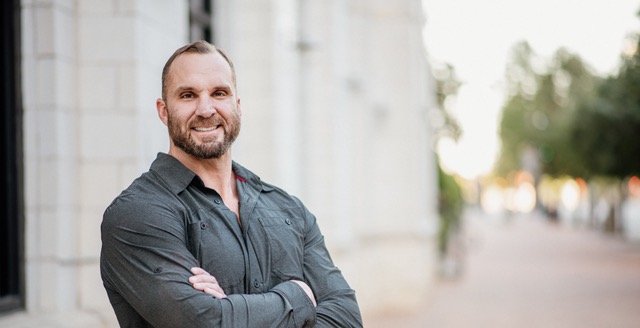 While Andrew Marr pursued his college studies on a football scholarship, the wars in Afghanistan and Iraq were intensifying. Reflecting on men and women of his age who were risking their lives, he didn’t feel right focusing on his personal goals and interests while others were forgoing their own to protect the nation.

Marr decided he would pursue a career defending the Constitution. He had also always wanted to test himself in combat.

After Marr finished his undergraduate work in 2006, he enlisted in the Army. After qualifying for Special Forces in 2009, he became an engineering expert on his team. His specialty involved logistics and explosives, and he was responsible for disposing of unexploded ordnance as well as proactively using explosives in combat.

“Just like in any other discipline or art, to be good at something, there’s only one way to do that. It’s to practice it over and over and over again,” Marr said.

Marr was frequently deployed to Afghanistan and southeast Asia between 2009 and 2013. When he wasn’t actively in combat, he was training and was exposed to explosions constantly. While he experienced multiple explosions in combat, it was the cumulative effect of these blasts that would impact him the most.

Coming home, Marr was one of this group of Special Forces operators who were physically and psychologically elite and who had survived lethal and difficult experiences without any visible injuries. However, he had invisible wounds and struggled to square his status as an elite warrior with what he felt inside.

“That makes it incredibly difficult and frustrating,” Marr said. “That is a very difficult, a very lonely tough process.”

Marr returned from his last combat deployment in September 2013, but he didn’t begin experiencing symptoms of traumatic brain injury (TBI) until January 2014. The first symptom Marr felt was a complete lack of energy. Then the physical symptoms hit, and he began having severe daily migraines. He struggled to maintain his vision and balance; at times even walking in a straight line was taxing. He then started to suffer from anxiety and panic attacks that would surprise him out of nowhere.

“At first I start feeling incredibly dizzy, have a shortness of breath, and then my lungs would clench. It felt like there was a fist coming through my stomach, and then after that, I would just start crying completely uncontrollably,” Marr said.

Marr couldn’t anticipate these episodes and felt powerless to stop them from running their course. He began to experience severe depression, and couldn’t perceive the connection between the anxiety and the ensuing depression. He had always been a happy person, he loved his wife, his family, and his job, and couldn’t comprehend why he would wake up feeling as if his entire team had been killed the night before because of a mistake he had made.

Then his cognitive ability began to decline. For instance, he struggled to grasp certain words in his vocabulary and his short-term memory was impaired. All of this impacted his interpersonal relationships, including his marriage. He found himself easily enraged by everyday annoyances like traffic. His loved ones struggled to understand.

“It became a very scary and dangerous environment for my family, and unfortunately anybody that was around me,” Marr said.

The only solution Marr could think of was alcohol. He can remember going to the liquor store, buying a fifth of whiskey, and guzzling the bottle in tears. He thought the only way he could calm and alleviate his anxiety and hopelessness was to drink. He began drinking from the time he woke up until the time he went to bed.

Marr sought out conventional treatment but found it only exacerbated his issues. He underwent psychotherapy and began taking numerous medications. He found himself in the care of several specialists, but there was no holistic approach to his treatment, and his underlying TBI went unaddressed.

Marr reached a crossroads when his 13-month-old son was hospitalized for a surgery to remove a growth on his neck.

He was in the intensive care unit with his son, and was drinking. He took a swig from a bottle of whiskey, swallowed a painkiller pill, and gazed down at his son. All of a sudden, he had a moment of clarity.

“I realized that at that time I was of no value whatsoever to him or my family in the condition that I was in,” Marr recalled.

Marr made a promise there and then to himself and his son. First, he was committed to return to being the man he was before his TBI. Second, he was determined to go off all of the various medications he was on. Finally, he decided to spend the rest of his life helping his peers who were contending with TBI. Those three pillars were the foundation that would pull him out of his crisis.

“That allowed me to reframe what was important in my life, and I needed to do those things to be the man that I needed to be for my kids and my wife,” Marr said.

After Marr made these commitments to himself and his family, he began experimenting with different kinds of treatment. Many of these methods weren’t covered under his insurance, but he nevertheless forged ahead on his journey of recovery across the country, looking for alternative therapies.

After receiving treatment in Texas, Marr’s story was published in an article. He then received an email from a Dr. Mark Gordon, who introduced himself and told him the work he had been doing on TBI in veterans. He shared some of the results of his studies, and encouraged Marr to call him. Marr dug a little deeper into Gordon’s research and background, and was astounded at the substance and personalized treatment he found in the doctor’s approach.

“I can’t even tell you what it was like to hear something like that for the first time,” Marr said.

A few months later, Marr met Gordon in Southern California. After running lab tests, Gordon discovered that Marr’s TBI had caused inflammation in his brain, which caused pituitary deficiencies that were leading to his depression, anxiety, anger, and cognitive decline. This idea had never been contemplated during Marr’s conventional treatment.

Gordon put Marr on a regimen of natural and hormone therapies, and the treatment was an incredible success.

Today, Marr is medication-free and is a happy husband and father of seven.

Marr and his brother, who was an Apache helicopter pilot, have since co-authored the best-selling book “Tales From the Blast Factory,” which was recently adapted into the film “Quiet Explosions: Healing the Brain.” He has also since earned his MBA from Pepperdine University and is an executive in the energy industry in Houston. These accomplishments would have seemed inconceivable before Marr’s treatment.

Since 2015, Marr has supported 350 veterans with TBI through his organization Warrior Angels Foundation by sponsoring and connecting them to Gordon’s treatment. The foundation has also been able to train more than 500 medical providers in this new treatment.