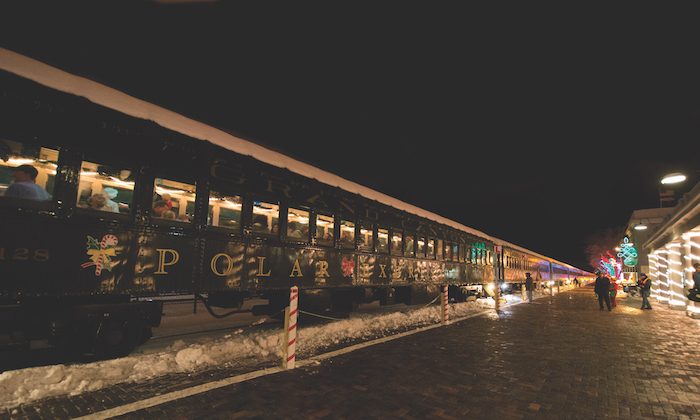 A Polar Express train ride is great for the young and young at heart. (EpochTimes)
Destinations

WILLIAMS, Ariz.—If you’re looking to chase away a case of Christmas Bah humbug, you might consider a ride on the Polar Express at the Grand Canyon. It combines the best of two worlds: the wonder of Christmas and the Grand Canyon itself, one of the seven natural wonders of the world. There’s something magical about a wintry ride on a vintage train, seeing incredible scenery and experiencing the holidays afresh.

Just like the story, steam from the train billows up in against the cold, wintry sky. Dancing chefs serve up hot chocolate and chocolate chip cookies to kids in pajamas and read the story to them as the iron horse gallops down the track. The Polar Express winds its way through pitch-black woods and down the tracks until it slows and visitors can see Santa’s workshop and a complex of buildings appear, twinkling with brilliant Christmas lights. As the train hisses and chugs to a stop, Santa boards the train and makes his way through the cars to greet everyone and hand out jingle bells.

For some families, the Christmastime Grand Canyon ride has become an annual pilgrimage. Crystel and Oliver Botar from Southern California drove eight hours to ride the storied train. Five generations of family members, including the matriarch of the family in her 90s, drove 660 miles. All 18 family members dressed in matching black and red checked pajamas. The family first began visiting the Polar Express about eight years ago when Crystel’s daughter was young. It’s since become an annual tradition. Crystel loves the family atmosphere, the time to be together and the Christmas feel.

Crystel’s husband, Oliver, a UPS delivery driver, finds the real spirit of Christmas here. His cellphone is home to photos of Christmases past with Santa and the entire family gathered in front of the great fireplace at the Grand Canyon Railway Hotel.

This was my first time to the Grand Canyon, so I opted for a walk at my own pace along the South Rim to take in the sights. I didn’t know quite what to expect. I braced myself for something possibly overly familiar. I wasn’t, however, prepared to be completely taken in and overwhelmed by the immense natural beauty.

Upon seeing the expanse of the Grand Canyon for the first time, like many, I was stunned into silence. The massive rocky carved canyon, the beautiful desert red and earthen colors against the brilliant winter sun and pale blue sky took my breath away. A wave of memories and thoughts flooded over me. Growing up, my father used to take me and my brother and sisters to Audubon films and nature talks in an effort to instill in us a love for wildlife. As I saw an eagle soar above the canyon, all I could think of was how much my father would have loved it here. The afternoon became a sort of quiet meditation, drinking in the view.

I walked along the trails, looking out over the canyon. (Seriously, it’s shocking and a bit terrifying how close to the edge some folks pose for pictures, something park officials discourage.) I visited the Lookout Studio, a rustic studio of stone and timber logs designed by Mary Colter and built in 1914, a prime spot to observe the natural beauty of the canyon. At one of the park’s bookstores, I became completely absorbed in books on canyon wildlife and the Native American culture of the Navajo, Hopi, and Havasupai. As the afternoon wore on and my visit came to a close, I boarded the train to head home, I wanted to hold on tightly to my visual memories and file them away in a special place in my mind.

For this Michigan gal, my point of reference for Christmas has always been a snowy white holiday. But this year, the innocence of a children’s storybook train ride and the pale white winter light of the American Southwest against the jagged canyon has become one of the best Christmases I can remember.

Martha Modeen worked as a news reporter for 10 years in Seattle, and now lives and works in sunny Arizona. As an avid swimmer and traveler, she has visited some of the world’s best destinations for snorkeling and scuba diving.