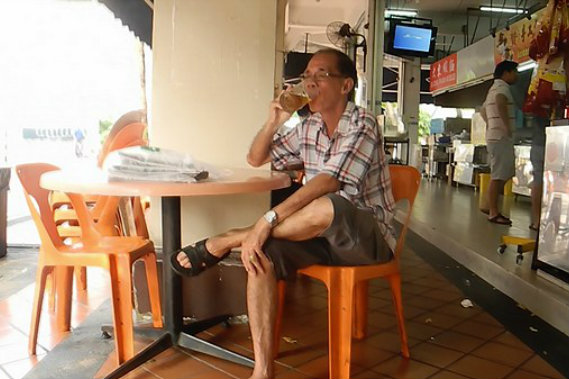 A Good Introduction to Singapore

I was sitting in a small, rugged hawker center — a type of food court that is ubiquitous throughout Singapore. This one sat on a corner of Joo Chiat Road, and had a row of small food stalls selling cheap, ethnically synthesized meals along the inner walls, while the outer two were open to the streets. The seating was made up of greasy, bright red plastic tables and grimy, bright orange plastic chairs. It was the kind of place where Tiger beer is served in big, frothy, iced mugs. It was the kind of place where people sit around drinking in the early evening, talking of life and watching the world waltz by on the sidewalk beyond. It was my kind of place.

It was around 5PM, and the after-work crowd was just starting to come in for their nightly drink. I bought a beer and took a seat at a wobbly plastic table by myself. I watched the people and cars go by, some stopped to chat with those who were eating snacks or drinking their beer or coffee. Everyone here seemed to have been decelerated, demured down by the pre-dusk of a hot, sunny day.

I shot a video of the place, and when I focused the camera back on myself to draw the clip to a conclusion, an older guy sitting next to me waved and asked where I was from. He was smiling, and seemed enthusiastic to chat. The people of Singapore speak English, and I momentarily felt a little embarrassed that he had clearly been listening to the lecture I’d just given to my camera. I invited him to come and sit with me; he ordered us up another Tiger beer to split.

He told me his name was David, and this was probably his real name — this was Singapore. He told me that he was a retired accountant and that he came to the small food court we were sitting in every day for a beer. It was obvious that this place was the local hang out for the neighborhood’s older residents, local and expat alike, the kind of joint that people just go to daily to see the routine faces and hear the routine news. Throughout our conversation people would scoot by our plastic table and nod or say hello to David.

I asked him about his ancestry, a common topic in Singapore, a city-state of immigrants from one corner of the Asian triangle or another.

“I am Chinese,” he responded.

I shifted to speaking Chinese, but he awkwardly squirmed and seemed as if he was only pretending to know what I was saying. I initially thought that it was a matter of him not understanding my accent, but eventually it became apparent that this wasn’t the case.

“My family is from China,” he replied, “but they came so long ago that we don’t know anything about them anymore. I don’t even speak Chinese very well. My parents never taught me. You probably speak better than I do,” he said while laughing.

David was in his early 60s, and grew up in a Singapore that was rife with ethnic tensions. To help solve these problems a new Singaporean identity was pushed, and everybody was told to speak English. It was a move at fairness, as English was viewed as a foreign language to everybody — Chinese, Malay, Indonesians, Arabs, and Indians — so it would be seen as a policy that favored no group in particular. The effect was a generation in Singapore who were discouraged from learning their ethnic language — and, as there really wasn’t much of a need to, many didn’t.

Though this was soon to change.

“It is very important to speak Chinese now,” David said. “My children, both of them speak perfect Mandarin.”

“How did this happen if you don’t speak Chinese to them at home?”

“They learned in school. Everybody learns Chinese in school now.”

Though English is still the main language, with the rise of global trade and internationalism a multi-lingual environment is now highly encouraged in Singapore. The Chinese economic boom has also resounded in an echo chamber here, and Mandarin is now compulsory in most schools. In today’s Singapore, kids from all ethnic backgrounds often end up learning the languages of the city’s other groups. The result has been that the young adults of Singapore are some of the most linguistically adept people on the planet. A huge amount speak English and Mandarin faultlessly, and many also speak Malay, Indonesian, and other languages as well. Singapore’s linguistic mix was once thought of as a social detriment but it is now one of the country’s biggest assets.

David then mentioned that he can speak Malay.

“Why do you speak Malay?” I asked.

I looked at him closer: he didn’t exactly look completely Han.

“We are all mixed here,” he proclaimed with another big laugh. “My grandmother wore a sarong. My mother and father both spoke Malay.”

Unlike in many other parts of the world where different cultures can live side by side for centuries and hardly mix, the people of Singapore are scrambled.

“Look at those kids over there,” David pointed to a couple of children crossing the street with their nanny. “What do you think they are?”

I stared at them intensely. They had flat faces, slight almond eyes, very bright, white skin, and their heads were topped with massive, tightly curled afros of a reddish hue. They were like a mixed set of Legos.

“I have no idea,” I finally admitted.

“Neither do I,” David said with a laugh. “They can be a mix from anywhere.”

That’s Singapore. Besides being a historic meeting point of Chinese, Malays, Indonesians, Indians, and Arabs, there is also a hearty European population here. Basically, everybody from everywhere has met up together in this Southeast Asian city-state.

“With this mix of people and different cultures, are there still ethnic problems? Are some groups superior and others inferior?” I asked.

“All the people are equal here,” David spoke. “Chinese, Indian, Malay, they are all equal.” Then told me about the districts where each group is most prominent. Singapore used to be divided up like a place where street gangs have demarcated their turf. The Chinese had Chinatown, the Indians India town, the Arabs had their Arab Quarter, and Thais, Malay, and Indonesians all had little parts of the city to call their own. Though the landscape is very mixed now, and many of the old cultural districts seem to function as little more than nostalgic reminders of the city’s history.