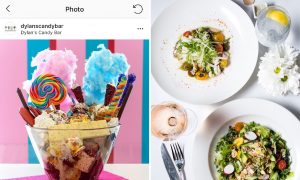 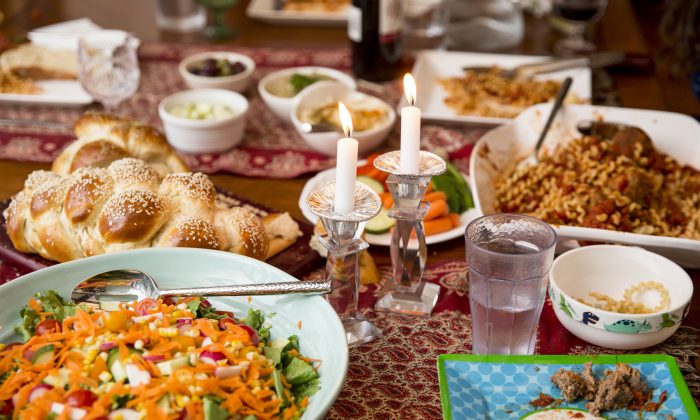 Shannon Sarna’s Shabbat dinner spread includes Jewish staples like challah and recipes passed down from her mother, such as pasta and meatballs and a big Italian salad with seasonal greens. (Samira Bouaou/The Epoch Times)
Epoch Taste

A Friday Tradition: Italian and Jewish Influences Make for an Eclectic Shabbat Dinner

Shabbat is centered around the family, a celebration of bonds between loved ones, a time to cherish each other’s company.

The tradition commences with a meal every Friday evening. Each member of the household plays a role. Shannon Sarna, the mother, nourishes the family with sustaining food.

Sarna and her husband take turns singing a prayer, then sip from the same wine chalice. They softly utter blessings to their two young children. After planting a kiss on top of their heads, the breaking of bread begins.

The dishes on the dinner table are an eclectic mix of Italian and Jewish influences: challah bread infused with garlic and rosemary, pasta with meatballs, an Eastern European cucumber salad, and hummus sprinkled with za’atar.

Sarna is a food blogger who documents her experiments with Jewish cuisine online. She also recently released a cookbook with her takes on traditional Jewish pastries, “Modern Jewish Baker: Challah, Babka, Bagels & More.”

But Sarna didn’t grow up with Jewish cooking at home. Her Italian mother made Sunday suppers and weeknight dinners with a spread of Italian-American dishes like eggplant parm, red sauce pastas, and antipasti.

“It was very important that the TV was off. Nobody was on their cellphones, scrolling through Facebook. It was really a time to sit and eat as a family, and talk and be silly also. My dad would look for ways to tease us and drive us crazy,” she said.

Her father’s side of the family was Jewish, but the food did not appeal to her. “Grandma wasn’t a good cook,” Sarna said with a bashful smile. During the Jewish holidays, her grandmother would prepare a feast with dishes from Ashkenazi Jewish cuisine. But they didn’t taste right to her.

It was only after meeting Jonathan Goldberg, now her husband, that she understood the culinary possibilities in Ashkenazi dishes. Jonathan showed her his family recipes passed down from his grandmother, who was an excellent cook. Among her specialties was a most satisfying potato kugel, crispy and baked to golden perfection. Sarna wrote out the recipe with the help of her husband and published it on a popular Jewish cooking blog.

“Baba Billie loved to cook, really loved feeding people. Her legacy could live on through the recipe, which other people all over the world will make now,” she said.

Every Friday, Sarna takes the day off to get Shabbat dinner ready.

It can be chaos in the kitchen with Sarna’s two young daughters in tow. Ella, who calls herself the Shabbat princess, twirls around in her poofy dress. She shows off the songs she’s learned, while little Billie—named after Grandma Billie—in baby talk, demands food.

After being denied sampling the homemade rugelach, babka, and Italian rainbow cookies lying on the table, Billie begins to whine. Sarna plucks her from the floor and puts her into a high chair for a pre-dinner snack.

Eventually, Sarna is carrying Billie in one arm while tending to the challah baking in the oven and the big pot of boiling water for the pasta. Ella wanders into the kitchen, curious to see what is going on. In the living room, Otis and Babka, two stately black labrador mixes, perk up at the sound of lightning and start barking loudly.

Sarna manages to quiet the dogs and direct traffic, summoning everyone to the dining room—including Otis, who settles underneath the table. After prayers, Ella and Billie dig into their pasta, tossed in with those gratifying meatballs Sarna learned to make from her late mother—modified to be kosher-friendly by soaking the breadcrumbs in water instead of milk. Sarna and her husband discuss the minutiae of family life: plans for Ella to visit her grandparents, the eggplants that Jonathan recently grilled but Sarna didn’t like. She salvaged them by making baba ganoush for the table: mashed eggplant with parsley, lemon, and tahini.

After Ella is finished with her plate, Billie wanders to her spot, nibbling on the leftovers. She gets tomato sauce all over her face, prompting laughs from everyone.

All are satiated. Sarna is exhausted. Ella says she can’t wait to stay up a little later tonight: the whole family will watch a movie in bed. It’s a ritual that Jonathan and his family observed when he was a young boy.

The routine will repeat itself again next week, and the week after that—Sarna’s own family tradition.