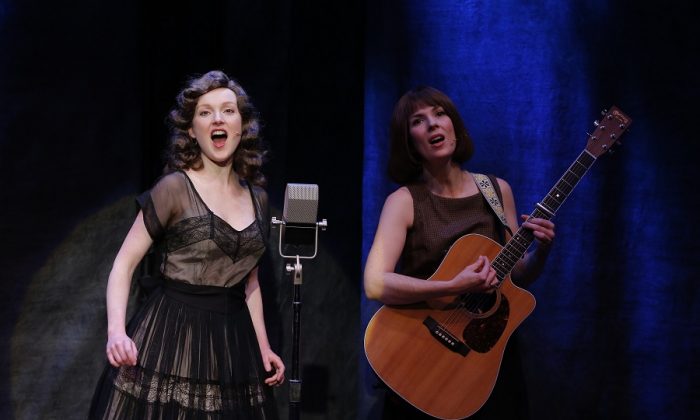 Two of the folk singers in "Lonesome Traveler"
Arts & Culture

If you know what a hootenanny is, then you will find “Lonesome Traveler” nostalgic. If you are too young to know the expression, then you will find the show educational. The revue, written and directed by James O’Neil, is light on the history but showcases more than 30 folk songs, well performed. Musical direction is by Trevor Wheetman and orchestrations are by George Grove.

The cast members portray famous folk singers and folk groups. The women change their hairstyles, so Sylvie Davidson puts on a blond wig to become Mary Travers of Peter, Paul and Mary (“Puff, the Magic Dragon”), and the men put on preppy shirts to play the Kingston Trio (“Tom Dooley”).

The history starts with a field recording in 1926 of Jennifer Leigh Warren singing the title tune. Justin Flagg is the narrator and portrays Pete Seeger doing “Guantanamera.” Jamie Drake succeeds in evoking two of the most singular voices of the folk movement: Joan Baez (“All My Trials”) and Judy Collins (“Turn Turn Turn”). Nicholas Mongiardo-Cooper has the widest vocal range of the men, successfully recreating the tenor Glenn Yarbrough (of the Limeliters) and the bass Lee Hays (of the Weavers).

The deepest emotions probably come from the sections on Woody Guthrie and his circle, especially Pete Seeger and the Weavers. While Woody speaks and sings about the Dust Bowl in “Pastures of Plenty” and “So Long, It’s Been Good to Know Yuh (Dusty Old Dust),” scenes of the devastation are projected on screens.

Also highly effective is Mongiardo-Cooper as Cisco Houston performing Guthrie’s “Deportee,” about a plane crash in which deported Mexican migrant workers perished. On the screens are the newspaper articles that identify the pilot and crew but omit the workers’ names.

A decade ago, the songs about the labor movement (like “Talking Union”) would have seemed dated, but they are timely again because of the Republican Party’s current drive to weaken unions. Woody Guthrie surely would have written a comic song about Gov. Scott Walker’s recent comment equating labor demonstrations to the atrocities of ISIS.

Guthrie’s “This Land Is Your Land” is sung with some of its more potent but often omitted lyrics intact. The audience learns about the derivation of the tune and is reminded that the song was penned as a response to Irving Berlin’s “God Bless America.” Anti-war sentiments are expressed in Pete Seeger’s “Where Have All the Flowers Gone” and Ed McCurdy’s “Last Night I Had the Strangest Dream.”

The Weavers are recalled singing their hits “Tzena, Tzena, Tzena,” “Rock Island Line,” and “Goodnight, Irene” and the three men performing “There’s a Meeting Here Tonight” sound just like the Limeliters. Matty Charles and Sylvie Davidson are effective as the Canadian duo Ian and Sylvia performing Gordon Lightfoot’s “Early Morning Rain.” Ian Tyson’s “Someday Soon” (about a young woman who wants to run off with a rodeo performer) is also included.

The two African-American cast members, Anthony Manough and Jennifer Leigh Warren, add luster to the show, but they are underutilized and the history of black music is insufficient. It does include Manough as Leadbelly (“Midnight Special”) and Warren as Odetta but omits the popular Harry Belafonte.

The cast members portray famous folk singers and folk groups.
You wouldn’t know from the show that Sonny Terry was a blues artist—he is depicted here performing a calypso number (“Zombie Jamboree”)—or that he is best known for his duo work with Brownie McGhee (who also makes a brief appearance).

Other peculiar omissions are singer-songwriters Phil Ochs, Tom Paxton, and Joni Mitchell. Bob Dylan is given short shrift in an electric version of “It’s All Over Now, Baby Blue” as the videos zip through the final decades of the 20th century. Perhaps we need a follow-up show concentrating on the 1960s.

Michael does row his boat ashore in “Lonesome Traveler,” but, probably because of its becoming a political cliché, there is no “Kumbaya.” The audience is urged to sing along during the show, but it’s not mandatory.

While the vocalists often accompany themselves on guitar, there is further instrumental support from Trevor Wheetman and Sam Gelfer.