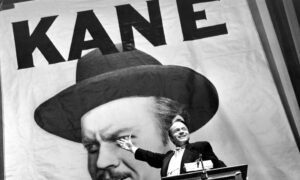 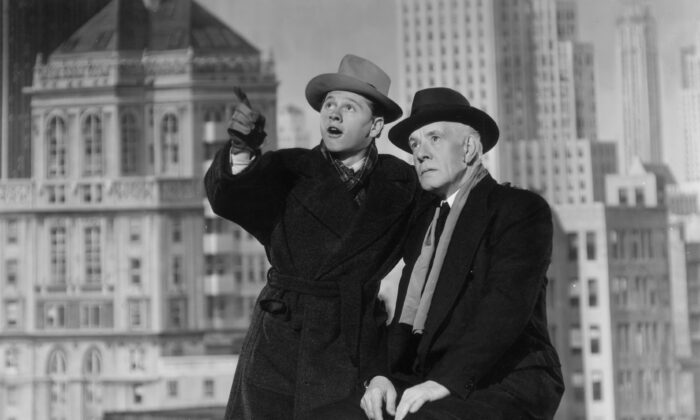 In the late 1930s to mid-1940s, the Andy Hardy movies were MGM’s most popular film series. Set in the fictional average American town of Carvel, USA, these films represented everything that was America at the time. In recognition of their popularity, the mayor of Hollywood held a special ceremony at Grauman’s Chinese Theatre on Aug. 15, 1941, to present a plaque to the actors playing the Hardy family, whom he dubbed “the first family of Hollywood.” In 1943, the Academy Awards gave the series a special Oscar for its “achievement in portraying the American way of life.”

Although the series eventually focused on energetic adolescent Andy, played by the increasingly popular Rooney, Judge and Mrs. Hardy were influential in all the films. One of the most admirable movie fathers, Judge Hardy’s characterization proudly honors traditional fatherhood, making the Hardy series ideal for Father’s Day.

The Andy Hardy series contains 16 feature films plus a short film featuring Andy and Judge Hardy (“Andy Hardy’s Dilemma: A Lesson in Mathematics – and Other Things.”) The characters were introduced in “A Family Affair” (1937), based on Aurania Rouverol’s 1928 play, “Skidding.” The first 15 films were made over nine years, averaging around two films per year. After “Love Laughs at Andy Hardy” ended the successful run in 1946, an attempt to revive the series was made in 1958 with “Andy Hardy Comes Home.”

The original Hardy actors returned to play aged versions of their characters, except for the beloved judge, whose death was referenced because Lewis Stone died in 1953. In this film, Andy is now a husband and father, with Mickey Rooney’s real-life son, Teddy, playing Andy Jr. Despite its many touching moments, this film failed to recapture its predecessors’ charm and thus did not restart the series, as hoped.

The Hardy films were short and uncomplicated, ranging from a little over an hour to an hour and a half in length. They could be made quickly and inexpensively, lacking Technicolor, elaborate costumes, and special effects.

These compact movies are comparable to sitcom episodes, yet the longer running times allowed for more themes and time to develop them. They also gave MGM an opportunity to test and develop new talent, especially young starlets. Kathryn Grayson and Esther Williams both made their debuts in Andy Hardy films, and Lana Turner and Donna Reed also had early roles in the series. Young Judy Garland, Mickey Rooney’s frequent musical co-star, played a recurring role in three Hardy movies.

Most of these films have two main story lines, one involving Judge Hardy and the other involving Andy. (Sometimes a subplot involved Marian, especially in the earlier films.) Judge Hardy’s story lines often have legal themes, whether he travels for a special case or works on a local problem. An ongoing story line is the aqueduct project, a major theme in “A Family Affair,” which provides occasional story material through the seventh film. In many of the films, the story lines between Judge Hardy and Andy are interwoven.

When “A Family Affair” begins, 15-year-old Andy is a confirmed woman-hater. This boyhood misogyny is surprising if you’ve seen the later films in which young Mr. Hardy is undeniably girl crazy. However, his attitude changes during the first film when his childhood friend, Polly Benedict (Margaret Marquis), returns as a sophisticated, beautiful young lady after years of being away. Andy quickly realizes that he enjoys kissing girls, a passion that endures for the rest of the series with Polly (later Ann Rutherford) and at least one new girl per film!

Predictably, his “hugging and kissing and good, clean fun” get him into trouble, either with financial problems or romantic mix-ups. Representing American boyhood, Andy is a good youth, but he is incorrigible. Even when his intentions are honorable, he often finds trouble because he doesn’t think through the consequences of his actions. This leads to the inevitable man-to-man talk with his father, who was introduced in “You’re Only Young Once,” the first film with Lewis Stone as Judge Hardy.

Although these movies were made decades ago, Judge Hardy’s advice to his son is wise, applicable, and inspiring today. The judge is a wonderful father because he is both an authority and a friend. He makes Andy and Marian respect him, but he also respects them. No matter how capricious or immature his children’s behavior, the judge never trivializes or disrespects their feelings. He treats them as intelligent human beings, capable of understanding right and wrong.

When Andy makes a mistake, he knows he must confess to his father and receive guidance. Judge Hardy doesn’t just lecture, however. He compassionately listens to his children’s problems and helps them find solutions. He never leaves Andy alone with a problem. As a loving father, he will offer a guarantee, a plan, or even money needed to solve his son’s dire circumstances. Nevertheless, he always helps Andy understand the morals and principles involved, making Andy pay his debts to whomever he owes. With this firm but loving paternal guidance, Andy grows in character throughout the series.

The best thing about the Andy Hardy series is that it depicts and glorifies traditional values. The Hardys of Carvel, USA, cherish patriotism not politics, with Judge Hardy naming George Washington and Abraham Lincoln as role models instead of current politicians.

Rather than preaching formal religion, the family shows quiet faith, highlighted by Andy’s heartfelt prayer when his mother is sick. Nevertheless, Carvel isn’t unbelievably or unrealistically good. The Hardys encounter dishonest people in and outside of their hometown. Local citizens break laws and are sentenced by Judge Hardy. Andy even faces small-time blackmail from his own friends. However, the wrong deeds and unscrupulous people provide a contrast to the upstanding citizens; the latter too are flawed, but they always strive to follow a moral code of traditional values.

At the center of this ideal American town is the Hardy family. This series beautifully shows how the family unit is the basis of society and Western government. Judge Hardy replicates his courtroom’s democratic processes at home, using fair government instead of dictatorship. As a strong, traditional head of the household, Judge Hardy loves and honors his wife and helpmate.

While the judge is serious and firm, his wife is sensitive, caring, and loving. Her priority in life is caring for her family, whether worrying about her husband’s legal problems or tending to her son’s latest ailment. Her spirit is one of joyful selflessness, without grumbling complaints.

Milly, the maiden aunt and schoolteacher, provides a third parental influence. While Emily is imaginative and charmingly naive regarding business concerns, Milly is practical and sensible.

All the charm, wisdom, and solid values in the Andy Hardy series come from a strong moral core. These films aren’t preachy, nor are they propagandist. They merely show that decent, moral living leads to good results. One example, in “Life Begins for Andy Hardy” (1941), is Judge Hardy’s talk to Andy about faithfulness and marriage. Warning his son against casual, illicit relationships, the judge says that Andy must begin to practice “fidelity to the girl you’re going to marry,” since “by entering into an illicit romance, you’re just inviting yourself to the habit of unfaithfulness.”