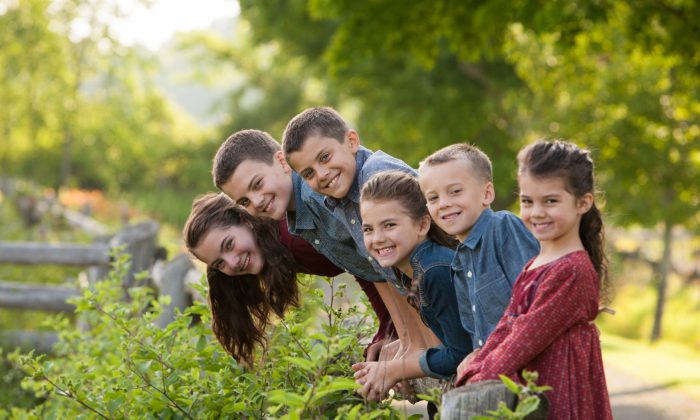 The Next Generation Leahy, a young family of high-energy musicians from Ontario, only came together 18 months ago, but already they’ve performed with such big names as The Chieftains and The Tenors.

And this time last year, they toured with their aunt and uncle Natalie MacMaster and Donnell Leahy, two of Canada’s most renowned fiddlers.

The six Leahy children who comprise the band, ranging in age from 5 to 13, inspire with their musical talent and amazing joie de vivre in a show that combines Celtic music and singing along with French Canadian step-dancing.

Their father, Doug Leahy, grew up in a musical family and performed with his parents and siblings from a young age. Now, he and his wife Jennifer perform with their children at venues in Canada and the U.S. in fun-filled, energetic performances.

They get to do what they enjoy.
— Doug Leahy

“They get to do what they enjoy,” explains Leahy, adding that he and his wife try to find ways to bring out the children’s personalities in the music.

The Leahys are firm believers in the power of music to offer important life lessons for their children. In their upcoming Christmas concerts in several Ontario cities, the Leahy children will perform a harvest dance that they put together themselves—a celebration of what they love and their hard work on the family farm near Lakefield, Ont.

“Harvesting for us is a rewarding time and that’s how we came up with this name,” says Leahy.

“In today’s world a lot of what people want is stuff faster and quicker. We want faster food, and we want faster Internet, and we want stuff right now. And one of the things that we try to teach the kids is that some really great things take time and take patience and take work,” he adds.

“That’s what a lot of the instruments do. [The kids] have to put a lot of time into their different instruments in order to have the success that they have and to be able to do what they do.”

Leahy finds living on the farm to be a great grounding experience for the children by providing them with chores and responsibilities. The parents also encourage them to be involved in sports.

“We believe in balance. It doesn’t matter what you’re doing in life … whatever it is, there needs to be balance in one’s life,” Leahy says.

The Lure of Touring

Thirteen-year-old Adele says performing music gives her a lot of energy and drive, especially through sharing it with other people.  She plays the piano, fiddle, and cello, as well as sings and does French Canadian step-dancing. For her, each skill has a special quality that inspires her to be better.  Travelling to different places to perform is also an exciting opportunity, she says.

Her dad says touring plays a big part of the incentive for the children to practice.

“People ask us about practicing—how do you get the kids to practice? And I always say that you can make them or you can inspire them, and one of the things that inspires them is when they get to realize, ‘Hey we get to travel. Our instruments, our music, is allowing us to see these things and to do these things,'” he says.

“The kids understand that very well and they work hard towards the upcoming shows because they’re excited to go see these places.”

Twelve-year-old Gregory also takes great joy in travelling and in his music. In addition to singing and dancing, he plays the piano, the accordion, and the fiddle, and also actively participates in sports. Recently he had to miss a sports tournament for a Nevada show.

“Those are all learning experiences,” says his father.

For Leahy, the most rewarding aspect of the tours is when their performances inspire children in the audience to learn music and share it with others. He believes there’s a lot of value in learning an instrument. In addition to the joy of playing music, it teaches children patience and dedication, he says.

The Next Generation Leahy will perform their Christmas concert in Markham on Dec. 19 and in Ottawa on Dec. 22-23, as well as tour to other Ontario cities. For more information, visit: www.thenextgenerationleahy.com