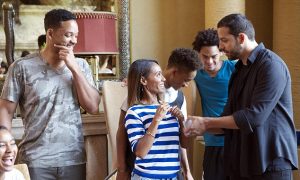 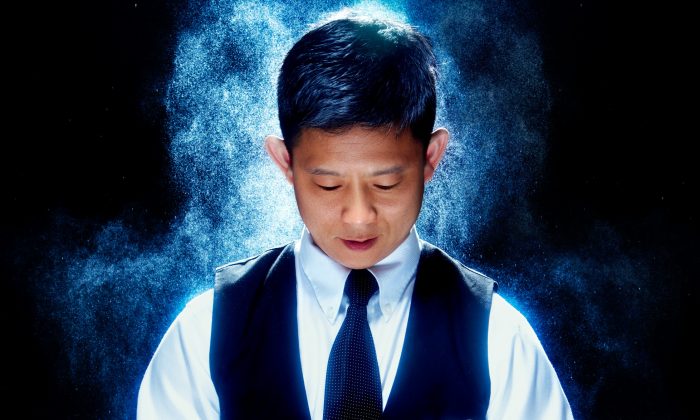 Daniel Chan is a professional magician who performs with his family. (Alexis Cuarezma)
Life & Tradition

Daniel Chan developed an interest in magic watching David Copperfield as a child, and when he was learning how to juggle in the juggling club at the University of California-Riverside. Little did Chan know that he would not only become a professional magician, but his career would become a family affair.

Chan borrowed a magic DVD from two friends, and his nascent interest in magic began to grow. When he returned to his native San Francisco, he discovered the Misdirections Magic Shop.

Soon, Chan realized that he could make a living as a professional magician. He attended every magic lecture possible, and began performing on the street.

His first paid performance was in 1999 when a family friend asked him to perform. The young magician made $10 after his first gig.

Since then, he has performed for Google, Yahoo, and the Golden State Warriors basketball team. He has also traveled all over the world and country, performing in Germany, Shanghai, Japan, Las Vegas, Orlando, and elsewhere.

Chan met his wife in a night club; she had been working in email marketing for The Sharper Image. The two started talking and she asked him what he did for a living. He told her he was a magician, and she thought he must have been being facetious.

She asked him to show her some tricks, and he asked her to come help in some of his shows. The two then began dating.

He tried to teach her magic, but she wasn’t too into it. However, she discovered she was a very talented balloon artist.

Chan’s wife Katherine is 40 years old, and is the resident balloon artist in the family. She has made an airplane for Google, a motorcycle for Allstate Insurance, and a variety of other creations. She can also make parade floats, superheroes, and nearly anything on the spot simply by looking at a photograph.

When the two had their first child James, Chan knew he wanted to teach him magic. He first taught him how to juggle, and gave him the stage name “James the Juggler.”

At first, James was hesitant to learn. However, after juggling for two hours during a holiday event he had made $120.

“That was the turning point when he turned age 5,” Chan told The Epoch Times.

James is now 11. He is not only able to juggle five balls at a time, but he can also juggle three flaming torches. He’s also started to develop his pick-pocketing skills. He can also memorize a deck of playing cards after they’ve been shuffled, and determine the order of the cards.

Chan’s daughter Grace, who is 10 years old, can juggle four balls at a time, and performs some of the same tricks her as brother James. However, she specializes in math and memory tricks. For example, she’s able to transform five $1 bills into five $100 bills.

Chan is 42, and his areas of expertise include sleight of hand, pick-pocketing, and performs tricks using an iPhone. One of the acts he performs is pulling a digital picture of a playing card from a phone. The participant chooses a card at random, and Chan presents the same physical card pulling it from the phone screen.

Chan is also an accomplished pick-pocket artist as well. He’ll perform a couple of tricks to get participants to relax, and then will lift their wallet, watch, phone, or keys without them knowing.

“It’s one of the strongest reactions you can get … They freak out and some of them cuss,” Chan said.

It’s hard to make it in the magic industry, but he truly enjoys working with his family. He also performs dinner shows.

“It’s just so rewarding to see the fruits of your labor come through. It’s like planting a seed and a tree,” Chan said.