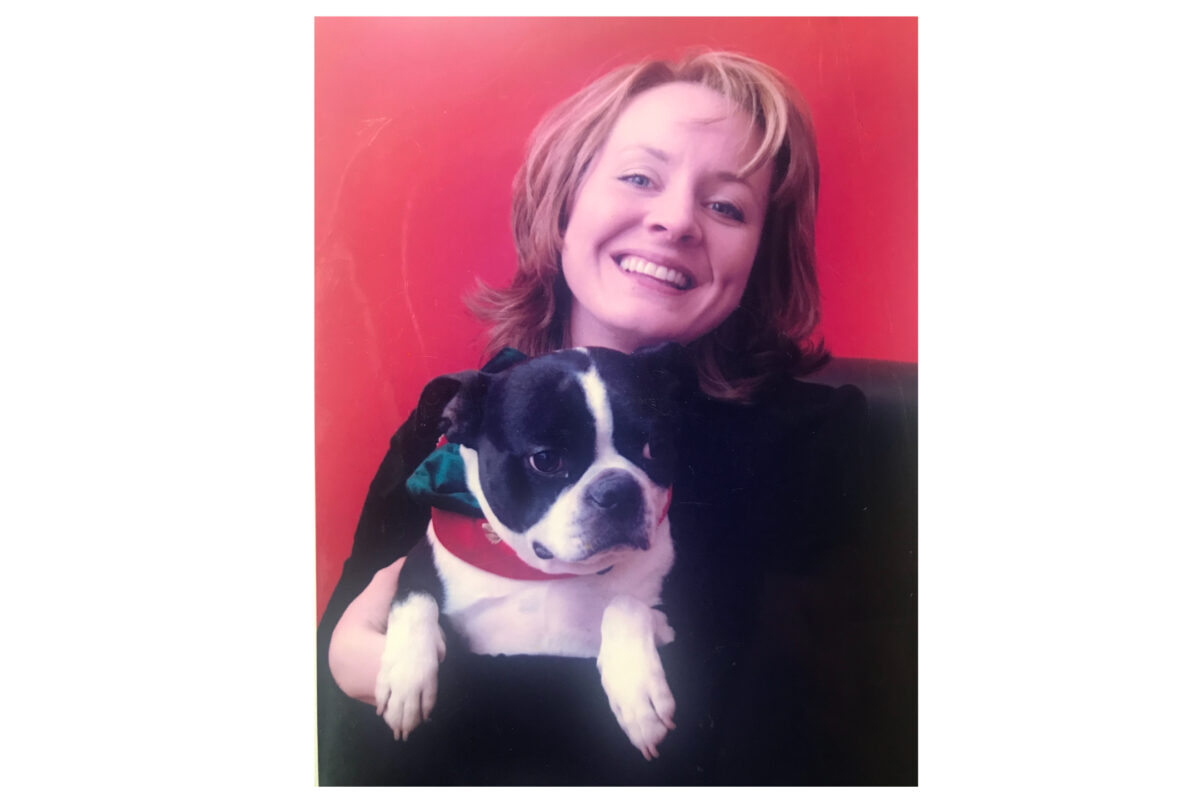 A month into our marriage, my new husband and I brought a scruffy, six-month-old Boston terrier to our home in North Carolina. We had driven an hour to visit a breeder and then had fallen for the pup the breeder called a “misfit.”

“Li’l Rocky don’t meet the breed standards since he weighs over 30 pounds already,” the breeder had warned. “Also, his nose ain’t the preferred Boston nose. It’s long instead of stubby, and it’s out of proportion with his body.” As he droned on, I studied the dog’s short legs, stout torso, protruding eyes, and fell in love.

“Let’s bring him home with us,” I whispered to Brian. He nodded.

We didn’t know a lot about Boston terrier breed standards, but we knew Li’l Rocky needed a name change, so we pondered the situation on the drive home. “Well, we live on Gabriel’s Bend drive; we could call him Gabriel,” Brian suggested.

As I stroked his fur, I added, “He looks like a little angel. We could call him Gaby for short.”

When we arrived home, Li’l Rocky-turned-Gabriel seemed delighted by the pastoral two acres at his disposal. And we delighted in our new addition to the family.

But we were a little worried about how this country dog would adjust when we returned to New York City the next July, moving from a house with two acres of grass to a 24th-floor, 800-square-foot apartment in the Financial District. Gaby seemed no worse for wear, however, and he especially enjoyed our 300-square-foot terrace, which was my favorite spot as well. As I sipped my coffee and gazed at the Twin Towers—just six blocks away—Gaby would lay on his side on the red brick floor and soak up the sun.

Several times a day, I would leash Gabriel and head out for a walk. I loved that my country dog had adapted so easily to city life and his new “backyard.” We would walk to nearby Battery Park at the southern tip of the island of Manhattan and look out at the Statue of Liberty. Then we’d make our way up and over to the World Trade Center to explore the Austin J. Tobin plaza.

But our fun adjustment to city life came crashing down just two months after we had moved to Manhattan. On the morning of September 11, 2001, Brian and I were standing on our terrace watching smoke billowing from the North Tower of the World Trade Center, alarmed and baffled by reports that a small plane had flown into the skyscraper. Suddenly, a passenger jet roared low over our heads and flew directly into the South Tower.

The impact hurled us backward into our living room and knocked us unconscious briefly. When I regained consciousness, a terrified Gabriel was whimpering and panting while jumping on my chest. In a panic, I leapt to my feet and rushed out of the apartment, barefoot and still wearing my cotton nightgown.

Brian grabbed Gabriel, threw him over his shoulder, and then we galloped down 24 flights of stairs. While taking shelter in nearby Battery Park, the ground began to shake suddenly and without warning. Thousands of people began shrieking in terror as we realized that a tower was falling.

People sprinted blindly in every direction, dodging trees, hurdling over bushes, and catapulting over railings. The park had become a giant obstacle course. I froze in terror as a mass of something hit me in the face. Gunk filled my nose and mouth, covered my pajamas, and coated every pore of my unprotected skin.

I looked at Gaby, who was panting heavily, his mouth open and his tongue hanging out, shaking in fear. He began licking his fur. “Stop!” I yelled through the gown I had pulled over my nose and mouth and pushed his head to the side. I understood Gabriel was just trying to clean himself, but I worried about what he was ingesting.

After about three hours of roaming around in a dust and smoke windstorm, we managed to board a boat bound for New Jersey that had been sent to evacuate us off the island of Manhattan.

For two days, Gabriel constantly vomited. We found a vet near where we were staying at my friend’s apartment. After observing Gabriel overnight, the vet briefed us on his condition, informing us that Gaby had cuts to his esophagus and was experiencing severe respiratory distress.

I had read in the newspaper that the dust that coated us when the towers fell was filled with powdered concrete, asbestos, jet fuel, glass, wood particles, pulverized electrical equipment, and even human remains. Animals are low to the ground, so they couldn’t help breathing in this toxic dust in a more direct way than humans did. I recalled memories of Gabriel running around in the dust, tongue hanging out, trying to lick it off his fur.

As the vet rattled off the list of ailments, Brian and I grew more and more concerned. I wondered if the vet was implying that Gabriel might not survive, but I was too afraid ask. We collected Gaby and walked back to our temporary home, since we weren’t yet able to return to our apartment.

We were able to return a couple of weeks later and had to contend with dirt and debris for months. But Gabriel slowly got better. And so did we.

Years later, we found out that Gabriel had a rare stomach cancer. Brian and I said farewell to Gabriel on May 12, 2009. We were heartbroken at his death and blamed 9/11 for his early demise. But we also felt blessed to have loved this little creature during his time on earth, just as we felt lucky to have survived the attacks together. Twenty-one years after the attacks of September 11, 2001, we also feel grateful to still be alive. But we still mourn for our angel Gabriel, as well as the almost 3,000 humans who died that day. We will for the rest of our lives.

Christina Ray Stanton
Follow
Christina Ray Stanton has written an award-winning book and several articles about 9/11. She and her husband still live in the neighborhood where the attacks occurred, New York City's Financial District.
SHARE
Friends Read FreeCopyFacebookTweet
You May Also Like