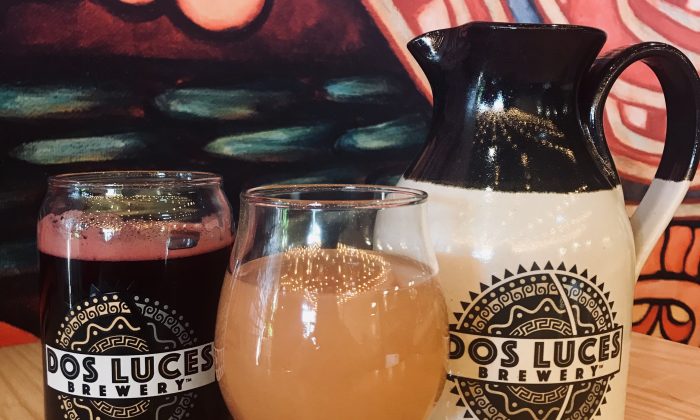 For all its innovation, the American craft-brewing industry is built on a European foundation. Experts can reasonably disagree on what defines an American beer style (for instance, this writer pinpoints eight, this one only three) but not about the fact that most are variants on the beers of Belgium, Germany, France, and the U.K.

Brewers Judd Belstock and Sam Alcaine hope to change that by going out on a limb—or rather, a stalk—and working with New World corn rather than Old World barley.

Belstock is the founder of Dos Luces Brewery, which opened in Denver in late August; co-founder Alcaine is a professor of fermentation science at Cornell, where he specializes in alternative fermentations. Meeting as employees at Miller in Milwaukee 13 years ago, they discovered that they had more in common than their passion for beer—namely, their personal ties to Latin America: Belstock’s family has close connections in Peru and traveled there extensively in his formative years, while Alcaine’s heritage is Cuban and Salvadorian.

Both were familiar with, and fascinated by, the region’s indigenous fermentation traditions, involving ingredients other than barley. The more Alcaine studied corn in particular, the more he began to question the Eurocentrism behind its reputation as an inferior brewing adjunct: “I was like, is it really? There’s a history of brewing with corn in the Americas; what could we do with it that’s actually interesting?”

As he and Belstock have since determined, the short answer is: a lot. Sourcing blue corn from Colorado, purple corn from Peru, maguey (agave) sap and panela (cane sugar) from Mexico, fruit from Colombia, and so on, Dos Luces is focusing exclusively on what you might call truly all-American, or pan-American, beers, based on brews that Belstock says “go back at least as far [as], if not further than, IPAs and pilsners,” but remain little known in the United States.

Their obscurity is due partly to the fact that they can’t be imported in mint condition—as Alcaine explains, “they’re the essence of a fresh, living beverage, and pasteurization changes them”—and partly to the fact that they’re hard to produce on standard brewing equipment. “We had ours specially made to work with corn, and it’s still really difficult,” admits Belstock.

In introducing these styles stateside, Belstock and Alcaine don’t intend to “speak for” brewers in Latin America, but rather to “use inspiration from the past to create something new,” in Belstock’s words—something that might encourage drinkers to explore not only the original product, but the culture surrounding it for themselves.

“They start by trying a chicha, and then they want to learn more about Peru,” he says. “They read a book, they travel, they get to know the people, and the world becomes a better place because they have a better understanding of it.” It’s a lofty goal, but the beers themselves couldn’t be more down-to-earth.

Versions of the corn beer called chicha have been made all over the Americas for centuries; Dos Luces focuses on the Incan-cum-Peruvian style. (As far as the principals know, it’s the only United States brewery to specialize in chicha, though a few others, including Delaware’s Dogfish Head and Avery in Boulder, Colorado, do make it.)

“Traditionally in Peru, you’d use jora corn, which is really starchy without a ton of flavor, and it’s hard to get here,” Belstock says. (It was historically prepared by chewing on the kernels, though “almost nobody in Peru still does that.”) Using homegrown malted blue corn instead is “common to everything that we do.”

Spiced with clove and cinnamon, Dos Luces’s Inti Chicha is “sweeter than Western European beer, because there’s no hops, so there’s no bitterness. You get a nice nuttiness from the corn as well as a hint of sourness.” Belstock also makes seasonal variants flavored with mango, guanábana, and passion fruit; down the line, he plans to experiment with Bolivian chicha, which is barrel-aged, and the Tarahumara Indian corn beer called tesgüino.

Fermented from the sap of the maguey plant, pulque—which in Mexico dates back at least as far as the Aztecs—isn’t technically beer. Dos Luces’s version, which contains 50 percent sap and 50 percent malted blue corn, is.

Because fresh sap is commercially imported only in very small amounts, Belstock tried using agave syrup with mixed results until, by chance, “a guy came to my department looking to import a much fresher nectar from Mexico,” recalls Alcaine. “I got to taste it, and it was amazing—it had this sweet, green, aloe-esque flavor to it.” Now, Belstock says, “I know I’m the only one importing maguey sap in the quantity that I am.”

Like the chicha, his standard pulque is spiked with clove and cinnamon, though he also follows modern Mexican practice by offering blended curados, flavored with everything from coffee and chocolate to lime and ancho chiles, a combination he calls “almost margarita-like.”

In the future, Belstock hopes to produce still other blue-corn beers based on such traditional beverages as tepache, a Mexican pineapple brew, and balché, which the Mayans made with bark. Alcaine, on his end, is looking at the possible use of base ingredients like cassava, peanuts, and quinoa (while embarking on his own brewing project involving acid whey, a yogurt byproduct). Ultimately, says Belstock, “We have a lot of scope for experimentation.”

Ruth Tobias is a longtime food and beverage writer based in Denver, Colorado. To learn more about her and her work, visit RuthTobias.com or follow her @denveateron Twitter and Instagram