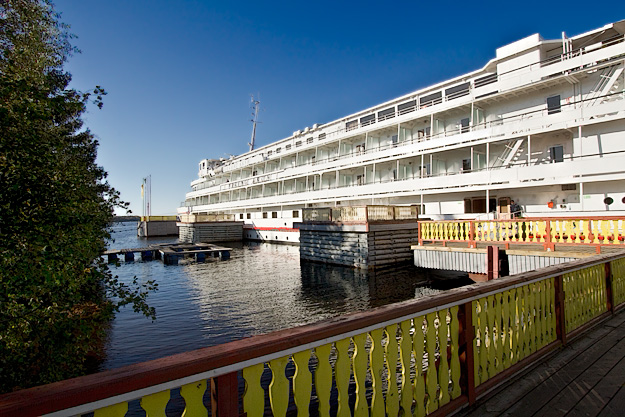 Russia had intrigued me for years, but traveling solo in this vast land where few speak English had always seemed a daunting prospect. My recent trip to Berlin had not helped; a tour guide insisted that Russia was the only place on earth where the life expectancy was lower than it had been 50 years ago, due to excessive use of alcohol. To my stereotype of a dark, brooding people, shackled by an oppressive regime that controlled every nuance of society and assigned KGB agents to spy on tourists, I added mental images of streets littered with drunken, homeless people. But it was too late to worry. Prior to arriving in Berlin I had finally arranged to visit Russia. There was no turning back.

Fortunately, I had chosen to travel with Viking River Cruises on their Waterway of the Tsars cruise, a 13-day voyage between Moscow and St. Petersburg on the Volga-Baltic Waterway, which promised an English-speaking crew and local, bilingual tour guides. From the moment I stepped on board the Viking Akun in Moscow, I knew I’d made the right decision. Built in 1989, my ship had originally sailed the Black Sea and later, served as an oil platform on Lake Ladoga. Viking acquired the ship in 2013; after a complete refurbishing it was launched as the Viking Akun in May of this year.

With all the luxury in evidence, it was hard to believe that the ship had once been an oil platform. Rather than the cramped quarters often found on ships, my stateroom door swung open to reveal a spacious suite with large closets, a private balcony, and a roomy bathroom with high-end toiletries and thick, fluffy towels. I grabbed a fresh orange from the tray on the credenza and sank back into the plush bed to read the cruise overview. Within minutes, my head was swimming. In addition to eleven included tours, a number of optional tours were also available. My OCD kicked in full bore; I wanted to do everything. An agonizing hour later I had made my choices and turned my form in at the front desk.