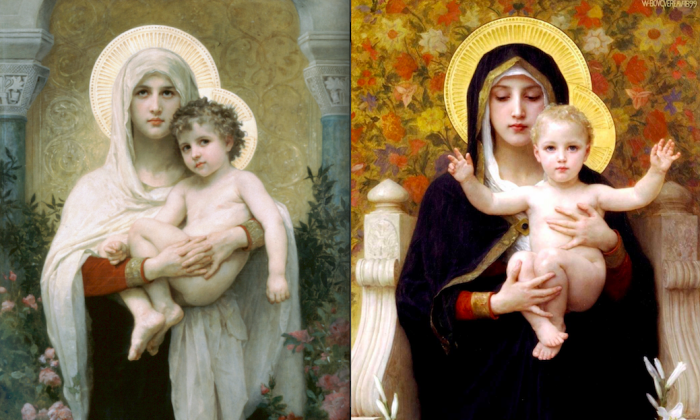 A Comparison of Two Madonna Paintings by Bouguereau

Although William Bouguereau (1825–1905), painted the Madonna and Child several times throughout his career, there are two versions that draw an interesting comparison to one another as they are similar in many ways but hold interesting symbolic differences as well. The first is “La Vierge aux Lys” painted in 1899 and the second is “La Madone aux Roses,” in 1903. Both are three quarters length and show only the mother and child with no additional figures.

The first, “La Vierge aux Lys” (Virgin of the Lilies) shows Mother Mary, clad in a black, averting her eyes. She looks down with a sense of modesty and reserve, holding the baby Jesus tight to her chest. A note of sadness can be detected in the mother and the black shawl emphasizes this.

The baby reaches forward hands raised up and out towards the viewer. He looks directly at the onlookers as a symbolic gesture that he is offering himself to humanity. Appearing towards the bottom of the canvas, framing the figures, are two white lilies.

The symbolism of the white lily can be traced back to the ancient Greeks as a symbol of motherhood, but it has since had a long term association with the Virgin Mary in both the Annunciation (when the angel Gabriel appeared to Mary telling her she would be the mother of Christ) and also in the Assumption (when Mary’s body is taken to heaven and her empty tomb is filled with these same flowers).

Though there are some differences in interpretation, the stem of the lily is thought to symbolize Mary’s religiously faithful mind, the petals her purity and virginity, the scent of the flower her divinity, and the leaves her humility. In addition, the lily from, a horticultural perspective, has only three petals and they have been interpreted to represent the holy trinity.

In contrast, in “La Madone aux Roses” (The Madonna of the Roses), the Virgin is clad in a white shawl and her eyes are cast upwards towards the heavens. She appears stoic and dutiful. Although the Holy Mother still holds the baby Jesus to her chest, the pose is more peaceful as her hands are comfortably intertwined. Both her and child are relaxed as the onlooker watches this tender moment of motherhood.

The baby Jesus is quite a bit older than in the 1899 version but still embodies the appearance of the Christ child versus the man. The symbol of the rose also has deep Christian roots. Roses represent martyrs, whereas lilies symbolize virgins. Although throughout the middle ages the rose became more closely linked to holy women in general, it later became associated as a symbol of the link between Mary and Jesus and also Mary singularly, as the rose is considered the queen of flowers and Mary the Queen of Heaven and Earth.