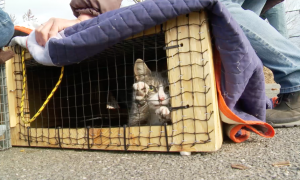 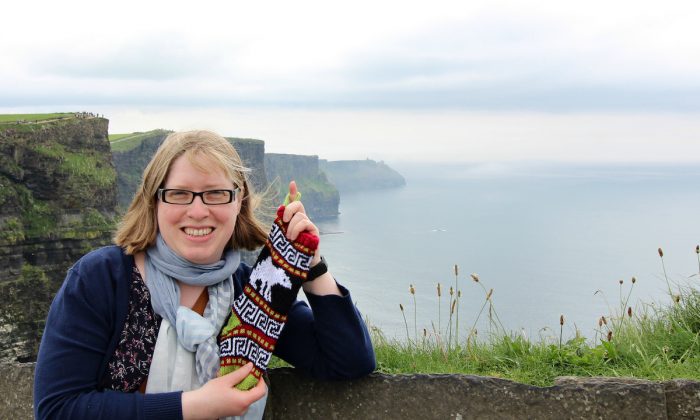 Martina Ruhl with one of her Christmas stockings. (Courtesy of Martina Ruhl)
Life & Tradition

A Christmas Stocking a Day for Cats

Many people have a hobby, and sometimes that hobby can be put to use for a noble cause. This woman is knitting one Christmas stocking a day to support local animal rescues and a sanctuary for cats.

Martina Ruhl is originally from Germany, but moved to Dublin 13 years ago because of the thriving economy. Ever since she was a young girl, she has always loved knitting.

“I must have been in kindergarten. Learning to knit is one of my earliest memories. I admired my grandmother’s skills, the click-clack of the knitting needles,” Ruhl told The Epoch Times in an email.

At first, she began by practicing the slip stitch. Later, her other grandmother taught her how to knit loops to hang their Christmas stockings.

Over time, Ruhl became more and more passionate about her craft. She enjoys selecting different types of yarn and developing new patterns.

The process can be complex and arduous, but the finished piece makes it worth the effort. Furthermore, she finds her hobby relaxing and therapeutic.

“Knitting can be just mindlessly relaxing, when you have parts of plain stitches that you don’t have to think about what you’re doing and your thoughts can drift,” Ruhl said.

In 2016, a feral cat she had been feeding came around one day with kittens. She contacted the Cat and Dog Protection Association of Ireland, which sent a woman to help trap and rescue the cat and her kittens.

Ruhl now has a total of five cats, and is passionate about supporting local animal rescues in her community. She also donates and volunteers at a local rescue organization.

Now she’s embarked on a project to knit one Christmas stocking a day for an entire year for a total of 365 stockings.

She does sell stockings, but for this project, she’s having patrons donate to a fundraiser for the Fairyglen Animal Sanctuary in Ireland and to several local rescues in exchange for one of her handmade pieces. The sanctuary was home to approximately 80 cats when Ruhl visited this past spring.

Ruhl makes several different sizes of Christmas stockings, including tiny, small, medium, large, and huge. The pieces she knits are made with acrylic yarn or pure wool, and it takes her about four hours to finish a small stocking. This year, her favorite piece to knit is a medium-size, pure wool stocking.

In 2018, she tried to knit one Christmas stocking a day. She kept a diary, and recorded the size of the stocking, the pattern, color, and type of wool for each.

She started keeping the diary and photographing the pieces, which she posts on Instagram, several days into the new year. Unfortunately she fell just short of her goal, completing 354 pieces. This year, she started anew on Jan. 1.

As of mid-December, Ruhl has knitted 339 stockings. So far, she’s on track to complete her goal.

“I’m hopeful. I managed to catch up from minus 19 in May. I like to knit ahead during the weekend, so I can have a few stockings on the needles that just have to be finished during busier weeknights,” she said.

She’s juggling her project with her day job, but at least work gives her hands an eight-hour break. As long as she keeps knitting on the weekends and her carpal tunnel doesn’t return, she should achieve her goal. If she gets to 365 stockings, it will be a great feeling. If not, there’s always next year.

“It’s a win-win situation: I get to knit, someone gets a Christmas stocking, and the cat rescue gets money,” Ruhl said.