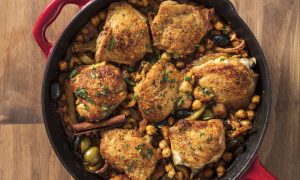 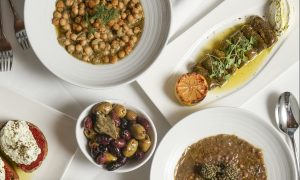 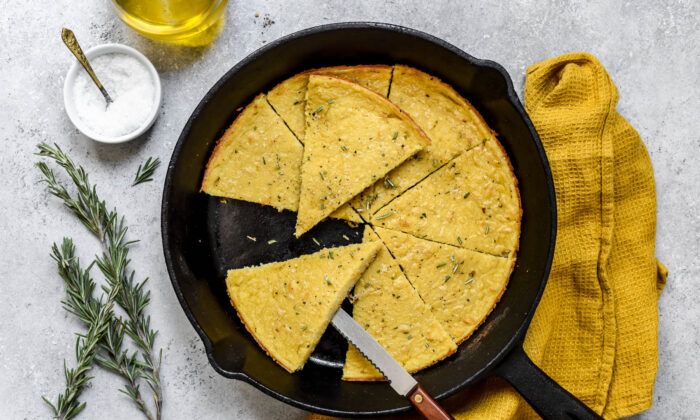 At home, using a pre-heated cast-iron skillet is the best way to recreate an authentic socca. (Audrey Le Goff)
Recipes

A Chickpea Pancake From the Streets of Provence

Made from chickpea flour and little else, socca is a nutty, smoky, and naturally gluten-free snack
By Audrey Le Goff
Print

Socca, a savory chickpea flour pancake, is a humble culinary treasure hailing from the French Riviera.

It’s a popular street snack in the city of Nice, in southern France, where you can often watch it being made right in the streets and markets, cooked by vendors with portable wood-fired ovens on wheels.

The pancake is baked over the fire until its edges are crisp and charred, kissed with the flavor of smoke, but the interior remains soft and creamy. It’s then cut into big, rustic wedges and handed out piping hot in paper cones, with just a crack of pepper—and ideally accompanied by a glass of chilled Provençal rosé.

From Worker Fare to Tourist Gem

Chickpea flour mixed with water is the base of most Provençal street food. In Marseille, the mixture is cut into circles or sticks and fried, to make crispy fries called panisses. In Nice, it’s spread thin like a pancake and baked, to make socca. Other Southern French cities such as Toulon and Hyere also adopted socca, but call it cade (from the Italian “caldo,” meaning “hot”).

Arabs are thought to have brought chickpea flour to Italy during the Middle Ages, and since then, baked and fried chickpea flour-based treats have been widely made and enjoyed in the Mediterranean, especially in northern Italy and southern France.

The origins of socca are likely rooted in the province of Genoa, Italy, further up the Ligurian coast from Nice. There, the dish is called farinata, meaning “made of flour.” It has since become a staple food all along the coast—the same recipe under different names.

At the start of the 20th century, socca was made and sold throughout the streets of Nice to early-morning factory workers and hungry fishermen setting out to sea. Once a humble blue-collar meal, socca has since gained fame as one of the city’s must-try dishes for tourists. Its cost has risen with its fame: in the 70s, a slice of socca sold for 50 centimes (in French francs, equivalent to $0.08); today, you can expect to pay at least 3 euros ($3.30).

But socca is wonderfully quick and easy to make at home—no trip to France required. The recipe is simple, requiring just a handful of pantry ingredients—chickpea flour, water, olive oil, and salt and pepper—and a few tricks.

This is a one-bowl recipe that only requires five minutes of prep time. The batter then needs some hands-off resting time, followed by a cooking time of no more than 10 minutes.

Here are a few tips for making foolproof, authentic socca at home.

With such a short ingredient list, the quality of the starring chickpea flour—also called garbanzo bean flour, gram flour, or besan—will make a big difference in your socca. Make sure you buy one labeled as gluten-free (some are mixed with other flours), ground very fine, and pale yellow in color.

Chickpea flour has recently grown in popularity across the world, alongside a growing demand for gluten-free recipes. It used to be tricky to find, but is now more common to see in grocery stores, usually in the organic products aisle. Most Middle Eastern and Indian grocery stores also carry it, as it is a common ingredient in their cuisines.

Along with being a versatile gluten-free flour with lovely nutty notes, chickpea flour has less calories and carbs than regular wheat flour, but more fiber and protein, making it more filling. This makes socca a naturally gluten-free and vegan recipe that is healthy, satisfying, and affordable.

Chickpea flour is an ultra-fine flour with a powdery texture when dry, and a sticky consistency when mixed with water. For this reason, it is very important to sift it before you add water, to avoid forming any lumps.

Use a Cast-Iron Skillet

In Nice, socca is traditionally cooked in a wood-burning oven on a large copper disk, sometimes more than a yard in diameter. At home, using a pre-heated cast-iron skillet is the best way to recreate an authentic socca’s slightly charred bottom.

Finishing off the baking with one minute of broiling adds some smoky flavors, too.

The batter comes together quickly, but needs to rest at least one hour, and up to 12 hours, before cooking. This allows the chickpea flour to absorb moisture evenly, making for a socca with a very creamy interior.

Socca is traditionally enjoyed plain, with a sprinkle of salt, a crack of black pepper, or a sprinkle of rosemary. While not authentic, a pinch of cumin or cayenne pepper can also add a delicious touch of smokiness.

Some “Americanized” recipes include garlic, caramelized onions, or even cheese—all of which make it too different from its original taste and texture, in my opinion. Keep it simple, at least your first time making it—you won’t regret it!

Socca is meant to be enjoyed right out of the oven, piping hot, so it can best deliver its signature culinary assets: a warm and creamy interior with crisp, charred edges. To serve, cut it into wedges or simply tear pieces off with your fingers.

In a large bowl, sift together chickpea flour, salt, and pepper. Whisk in warm water and olive oil. Let sit, covered with a cloth, at room temperature for at least one hour.

Place a 9-inch cast-iron skillet on the middle rack of your oven and preheat to 450 degrees F.

Once pre-heated, carefully remove your skillet from the oven and add a tablespoon of olive oil—it will sizzle a bit. Immediately pour in your batter in a steady stream until it reaches the edges of the pan.

Bake for 8–9 minutes, until the edges are set. Then, turn on your broiler on high, and broil for 1 minute, until the top of the socca looks completely dry and the edges are slightly charred. Keep your eyes on the socca: the top can turn dark brown very quickly, so make sure not to overdo it.

Remove the skillet from the oven and gently lift the edges of the socca with a spatula. With your hands (or with a small knife), cut into wedges. Sprinkle with some salt and pepper, and serve immediately.

Audrey Le Goff is a French food writer, photographer, and creator of the food blog “Pardon Your French,” where she shares recipes and stories from her beloved home country, France. She is the author of the cookbook “Rustic French Cooking Made Easy” (2019). She currently lives in Niagara, Canada. Follow her on Instagram @pardonyourfrench