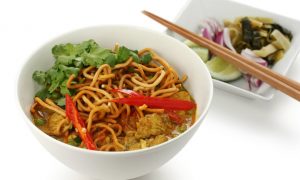 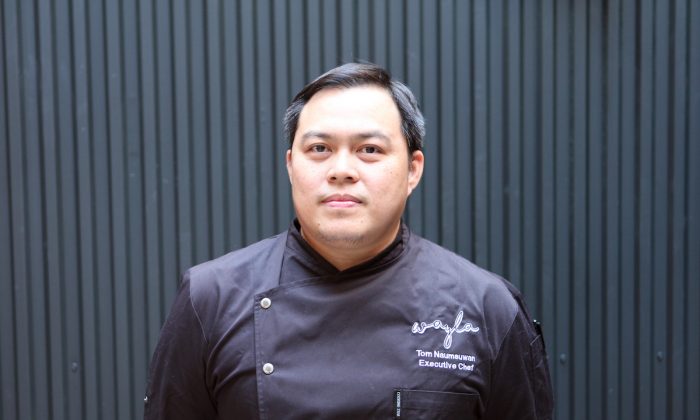 A Chef’s Memories From the Markets of Bangkok

At Wayla in New York City, Bangkok-born chef Tom Naumsuwan draws upon the foods of his childhood
By Andrew Thomas

Chef Tom Naumsuwan vividly remembers accompanying his mother to the street markets of Bangkok, Thailand, where she would sell her homemade curries and fresh bread in makeshift bags made out of newspaper.

There, as a boy, he learned how to cook from the varied street vendors.

Now, Naumsuwan has taken those memories and experiences to his first restaurant, Wayla, on Manhattan’s Lower East Side.

Naumsuwan grew up under humble circumstances in Bangkok. He ate simple foods such as curry, fried chicken, and pad mee korat, a stir-fried noodle dish made from his family’s secret recipe.

While his father worked full-time, his mother sold her curries and breads at the market to supplement the family income while taking care of the children.

As a boy, Naumsuwan would help his mother out with prep work and anything else she needed before he headed to school. After school, he would often return to the market to help again.

He can still remember the swirling aromas of fragrant herbs, cooking meat, and livestock, he said.

Learning at the Market

Naumsuwan’s mother taught him how to use shrimp pastes and chili pastes, and how to use a pestle and mortar. By the age of 7, he had developed a profound interest in cooking.

His mother would send him to different vendors in the market to retrieve ingredients, and it was from those vendors that he learned how to cook a variety of different foods.

Most everything was available at the market, he said, from fried chicken, chicken liver, and grilled skewers to fried banana and taro, mango sticky rice, and a variety of other desserts.

Naumsuwan would learn by observing, asking questions, and directly helping the vendors cook.

“Just being a kid, they were nicer to him,” said Naumsuwan’s wife Lalita Tangpipith, translating for him. “He also would have to buy food when he was there, or sometimes, they would just give him food, or exchange food because he [was] interested in food already. Sometimes, he asked them questions, and they [didn’t] hesitate to tell him things because they [thought] he’s a kid.”

Over time, Naumsuwan learned how to choose ingredients, cut meat, and fry foods, and worked on his knife skills. Most importantly, he developed his palate to distinguish between different tastes.

After an economic crisis in Thailand, Naumsuwan moved to New York in 2007 to help his brother at his Japanese steak house, Noda.

While food was always fresh in the market in Bangkok, Naumsuwan had to adjust to the fact that in New York, some protein had to be frozen and defrosted, and some of the ingredients that had been readily available in Bangkok weren’t available. He also had to adapt to stricter food safety regulations.

“It’s not like Thailand, where they just kill a pig and send the meat out that morning,” Tangpipith explained.

After working with his brother for five years, he became the head chef at Spicy Shallot, a Thai restaurant in Elmhurst, Queens, in 2013.

While working at Spicy Shallot, he learned more about how to manage people. Culturally, he had to become comfortable dealing with people who were older than him, and learn to balance managing employees, while still being respectful of his elders, which is customary in Thailand.

Naumsuwan wanted to open his own restaurant for a simple reason: He wanted to cook the food that he enjoyed cooking and eating. He wanted to take advantage of his own creativity.

“Wayla” means “time” in Thai, and the idea behind the name of the restaurant was to have a place to forget about time in a city that is constantly in motion.

While Naumsuwan’s experience cooking and eating street food in Bangkok inspired the menu, he also wanted to elevate the cuisine. The menu features both traditional street food with a creative twist, and traditional Thai entrees with an elevated presentation.

For example, the restaurant’s sen chan pad lobster is very similar to the familiar pad thai, but instead of using a basic peanut sauce, Naumsuwan sautés fresh rice noodles in a lobster sauce. The dish also comes with a completely de-shelled lobster, as opposed to traditional proteins such as beef or pork, sautéed in a tamarind and lobster sauce, and placed on top of the noodles. The dish is then garnished with the lobster head, chives, and peanuts.

Under the street market portion of the menu, there’s moo sarong, a fried meatball appetizer. The dish was traditionally reserved for nobility because of its labor-intensive process, but became popular among the masses after it was featured in a Thai soap opera.

To make the dish, ground pork is mixed with soy sauce and white pepper and formed into meatballs, which are then wrapped with thin noodles and fried. The result is crunchy on the outside and tender on the inside, with a hint of heat from the white pepper. Six meatballs are served with a sambal chili sauce for dipping.

“Tom thinks it’s fun to bring that dish here, since no one makes it,” Tangpipith explained.

Other traditional street food dishes on the menu include peek gai tod, which is crispy fried chicken wings that have been halved, coated in a sweet citrusy plum sauce, and seasoned with toasted sesame seeds; and som tum Thai, a spicy yet refreshing salad featuring julienned green papaya, dried shrimp, peanuts, lime, and crushed chilis.

Naumsuwan stays true to his heritage, but strives to present the food in creative new ways.