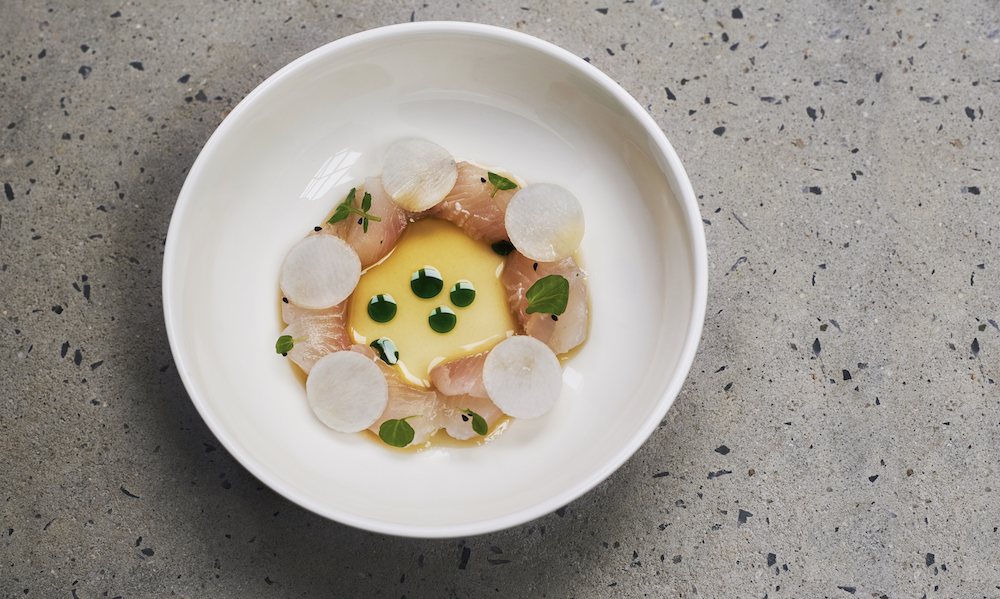 A Chef’s Journey: Taking Oxalis From Pop-Up to Brick and Mortar

Opening a restaurant is an arduous task, particularly if it’s the first one. This young chef honed his skills in New York and the south of France, and chose a unique path to opening up his own place.

Nico Russell is the 30-year-old co-owner and executive chef of Oxalis in Brooklyn, New York. Oxalis started as a pop-up restaurant series in 2016, and after much success—including 30 consecutive sold-out dinners—it became a brick and mortar establishment on Nov. 28 of last year.

Before he opened his own restaurant, Russell mastered his craft in the kitchens of New York City’s Michelin-starred Daniel and France’s critically acclaimed Mirazur.

Russell first developed an interest in cooking as a child growing up in northern California, where he would pick the produce from his or a friend’s garden for his family to cook.

In early 2011, the then-22-year-old cook started working at Daniel in Manhattan. Russell worked all of the stations, and eventually landed a position as sous chef in their banquet and event kitchens. After working at Mirazur in France, he returned to the United States at age 27 with the dream of opening his own restaurant.

Any chef will tell you opening a restaurant is a daunting task, and often a leap of faith. Russell and his business partners, Steve Wong and beverage director Piper Kristensen, decided they would develop their menu and restaurant concept through a series of pop-up events in Brooklyn. The ultimate goal was to open a brick and mortar location, but they were honestly unsure what the pop-up series would become.

“We wanted to validate ourselves, and kind of prove that the Brooklyn diner specifically wanted to eat this kind of food,” Russell told The Epoch Times.

They also used the pop-ups to determine price points, and how many courses they wanted to feature for their tasting menu. For instance, Russell initially started with a nine-course tasting menu, but noticed diners were getting tired and brought the number down to seven or eight.

Taking the pop-up route was ambitious and not without obstacles. According to Russell, one of the biggest challenges was getting guests to trust that they’d be cared for and experience a delicious meal, and to develop that trust early on. After about eight months, they were already having repeat business.

Another challenge was that Russell often had to use other chefs’ kitchens. Cooking new cuisine in an unfamiliar kitchen could be daunting.

Furthermore, Russell wanted to be respectful of someone else’s kitchen, and leave it as good as he found it.

“You never want to overstep your boundaries, and we were always conscious of that,” Russell explained.

Throughout the process, people approached Russell and offered investment in exchange for control of the restaurant, but he and his co-owner wanted to stay at the helm of their own business.

Don’t Mess With a Good Thing

While the cuisine at Oxalis is French with a Japanese influence, the food is first and foremost product-forward. The dishes are simple because Russell doesn’t want to mess with quality products, but they’re supported by other layers of ingredients that highlight the star of the dish.

For instance, their fluke dish is gently cured in dried citrus, which is served with a fermented leek juice and white soy dressing, and garnished with toasted Nigella seeds. While the dressing and the Nigella seeds add a pleasant onion flavor and enhance the dish, they don’t overpower the tender fluke.

The mushroom pot-au-feu, which substitutes the beef of the traditional French stew with mushrooms, also illustrates the idea of letting the product speak for itself. A simple dish of grilled mushrooms in their own consommé, it evokes the very essence of the fungi.

The restaurant features both an a la carte bar menu and a $60 six-course tasting menu. For the tasting menu, diners are unaware of what they’ll be having until they sit down, in an effort to create a unique and surprising experience. Furthermore, the tasting menu changes every couple of weeks depending on which ingredients are in season and which are the freshest.

“Anything with a little bit of care tastes special in my mind,” Russell said.