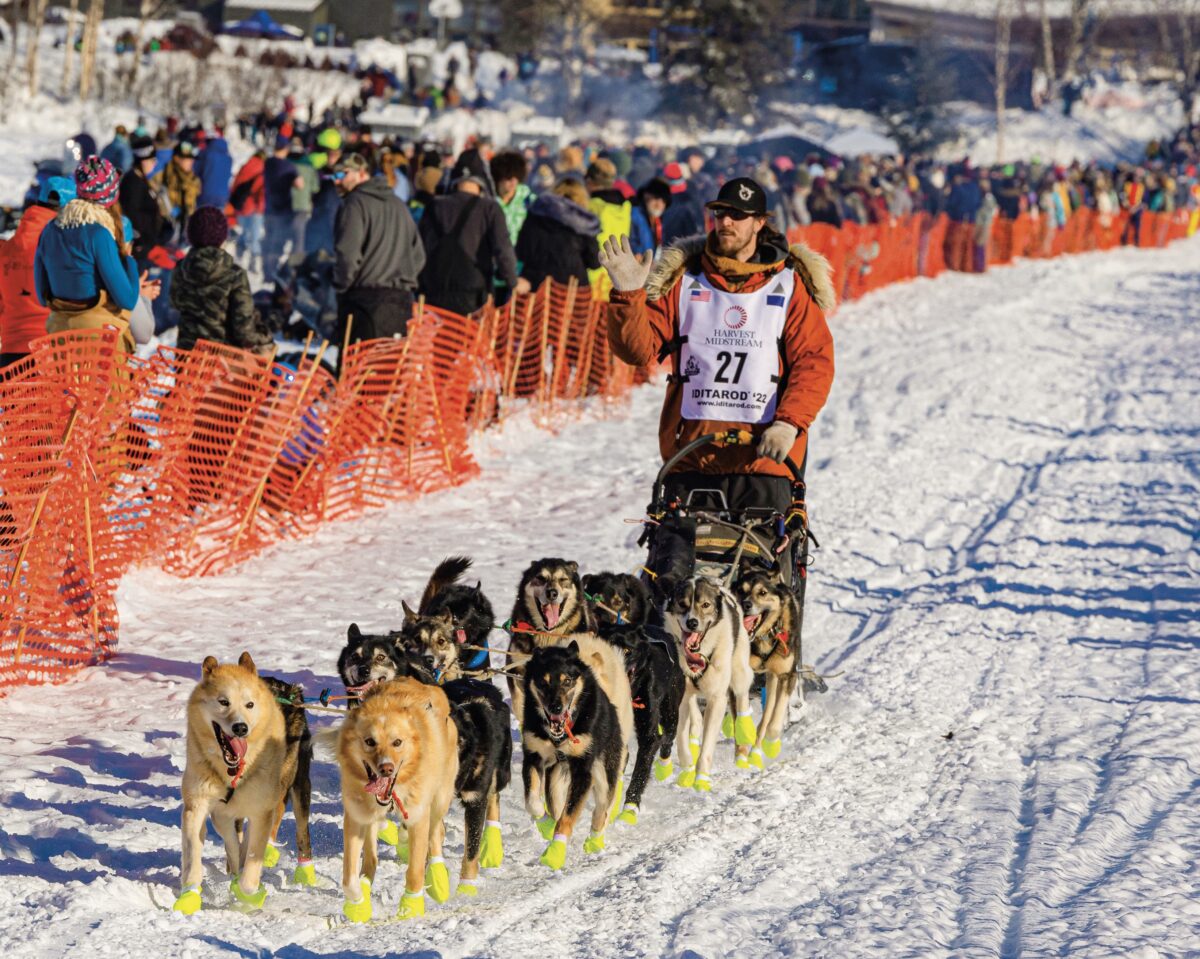 Racing across 1,000 miles of Alaska wilderness in a dogsled requires Brent Sass to train his dogs and his mind to be relentlessly determined
BY Sandy Lindsey TIMESeptember 16, 2022 PRINT

Attitude is everything for Brent Sass, winner of the 2022 Iditarod Trail Sled Dog Race. Always a challenging event, it was particularly harrowing this year.

Sass said he went through what he describes as “mental warfare” to bring his team across the finish line first in 2022, triumphing despite being blown off-course by a mammoth blizzard on the last leg. He credits his passion for the sport, a close relationship with his dogs, leadership skills, and an unwavering positive attitude—but most of all, he credits his dogs with keeping him honest.

“You can’t really fake attitude with them,” he said. “The dogs can see right through most anything. So you truly have to be excited and happy about what you’re doing. If you’re in a bad mood, they are, too. When you’re happy, the dogs are happy, and when the dogs are happy, you can pretty much get through any conditions.”

Established in 1973, the Iditarod winds through roughly 1,000 miles of wilderness from Anchorage to Nome, Alaska. Teams of up to 14 dogs pull sleds for 8 to 15 days—it actually took up to 20 days in the early years—through blizzards, white-outs, and the generally rough terrain of wild Alaska with possible wind chills of minus 100°F—in a good year. The weather for the 50th anniversary 2022 race was so fierce that three mushers (drivers of a dogsled) were forced to take shelter, despite resulting penalties.

Sass experienced a crash that could have ended the race for him during a harrowing blizzard. “We were having a blast, until we were on a side-hill and the wind gusted up real high and it caught me,” he said. “I got top-heavy and we just tumbled down off the trail into the abyss.” The dogs were dragged down with him. “Finally, everything stopped and the dogs immediately hunkered down. Drifts are already coming over the top of them and I knew they’d be wondering what to do.”

He looked up and realized he had lost sight of the trail. “At that point, I turned on the sled’s handlebar headlight so I could see the sled, because if you walked away 10 feet, the sled was gone.” With the light on, he walked farther and spotted a reflector on a trail marker. “The sled was pretty far off the trail, but I had been pounding my foot into the hardpack [compacted snow] so that I had some bit of trail that I could follow.”

With the trail found, his next focus was to tend to the dogs, calming them while cleaning their eyes and muzzles of snow and ice buildup. “Through the chaos, I was talking to the dogs to reassure them. I got them all stood up, dragged the gangline [a central line that connects the sled to the dogs’ tuglines] around, and got the sled turned around so we were pointed towards where I had found the trail, and we resumed the race.”

While 2022 was his first Iditarod win, he is a three-time champion of the Yukon Quest, a 1,000-mile dogsled race, and placed third and fourth in the 2021 and 2020 Iditarod races, respectively. With this year’s Iditarod title, that makes him one of only six people to win both 1,000-mile races. Over 21 years of mushing, Sass said he has learned the importance of maintaining a positive attitude, no matter what, as his bad mood can cause the dogs to “sour.” After experiencing a breakdown in the 2016 race, he developed a new mantra—“Run your own race”—which he had tattooed on his body, along with “Attitude is everything,” “Pain is inevitable—suffering is optional,” “Livin’ on the edge,” and “Believe.”

When not racing, he owns and operates Wild and Free Mushing, which breeds, raises, and trains Alaskan huskies for long-distance races. He also guides expeditions into the Arctic wilderness. He described himself as “professional dog musher/dog dad/wilderness guide/gold miner/equipment operator/cabin builder/landlord.”

When he was 8 years old, his grandparents visited Alaska, bringing back photos of mountains and rivers that greatly inspired Sass. He told his parents he would go to Alaska when he grew up. After graduating from high school, he attended the University of Alaska Fairbanks, where he skied on the cross-country ski team his first year.

In 2001, he purchased land in Goldstream Valley, just outside of Fairbanks, and started building rental cabins. After two summers, he had six cabins. One day, as he was working on the cabins, he saw a dog team go by. “A light went off in my head, and I knew I wanted to do that,” he said. “I’ve never let that dream get away.”

He followed the dog team to talk to the musher, who told him to come back in a week. “When I did, he handed me a 5-week-old puppy that I named Silver,” he recalled. “Little did I know, that dog would change my life. Over the next several years, I built more cabins and collected more dogs from the newspaper’s ‘free items’ ad section,” which advertised dogs for adoption.

His goal was to assemble a team of dogs that could pull him through the wilderness. It was a motley crew led by Silver, an old Alaskan husky named Brent, a Mackenzie River husky, a Saint Bernard/husky mix, and another big husky named Leer.

Around this time, he applied for a job at a kennel, having no idea it was owned by five-time Iditarod winner Susan Butcher and Yukon Quest champion David Monson. The job turned into an amazing mentorship for Sass. In addition to learning from Butcher and Monson how to raise and train dogs, Sass began studying other racers, their moves, and their dogs, eventually opening his own breeding operation. Though Silver was bigger than the standard race dog, he was extremely smart and mentally strong; he became Sass’s main breeding stud. Sass ran tours by giving sled rides to paying visitors in order to fund his races.

“I named the kennel Wild and Free Mushing after a song by Hobo Jim, the Alaska state balladeer,” Sass said. “‘Wild and Free’ is a song about a guy who follows his own path, making it the perfect name for my kennel.”

Silver, who passed away at the age of 18 three years ago, was the foundation of Sass’s breeding program. The canine is the father, grandfather, great-grandfather, and great-great-grandfather of 80 percent of the kennel’s pups. “The dogs are everything,” he said. Sass has raised all 50 dogs that he currently has in his kennel. “I bond with each dog, and the relationships that I build with these dogs is what makes it possible for us to compete at the high level required by these races.” Sass is a great example of what can be accomplished by an individual who seizes upon a dream and seizes upon his every waking hour to make it come true.