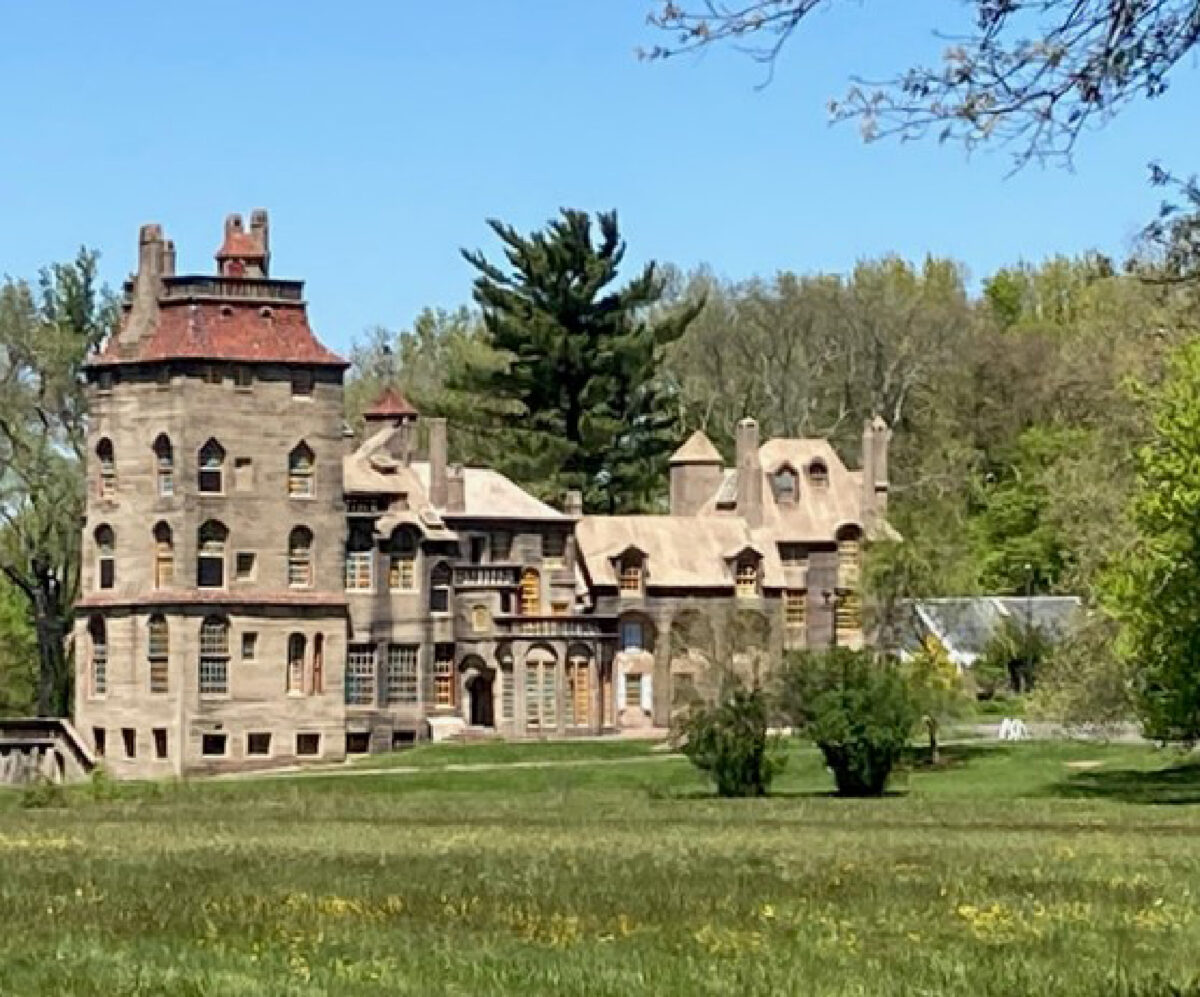 Now a museum, Fonthill Castle in Doylestown, Pennsylvania, was once the home of archaeologist Henry Chapman Mercer. (Photo courtesy of Bill Neely.)
Travel

A Castle in Bucks County

Henry Chapman Mercer was an unusually accomplished and fascinating man who was born in 1856 and lived until 1930. He was admitted to the Pennsylvania bar but never practiced law. His passion was travel, and he became an archeologist who went on to dig in many countries.

He never married, but in his hometown of Doylestown, Pennsylvania, he built Fonthill Castle, a 44-room home for himself on 70 acres. Next to the castle is a sprawling Gothic and Medieval cement structure, his Moravian Pottery and Tile Works factory. Here he and his craftsmen produced exquisite handmade clay tiles with designs that referred to famous works of art and literature and Greek and Roman mythology and more.

He was a collector, so he also built the Mercer Museum to house his collection of 60,000 tools used in everyday life before the Industrial Age began so that future archeologists would not have to labor to dig up relics of the earlier centuries in America and try to figure out what the tools were used for.

Since Mercer’s death the house and the museum have belonged to the city, and it is open now for hourlong guided tours. Our guide, Lisa Crawford, gave us an informative tour of this large and unusual castle, which itself is a work of art.

We drove onto the property between huge buttonwood trees that lined the drive, significant since Mercer adored and nurtured trees and naturalized wildflowers. The first place on the tour was the garage, although he had neither cars nor carriages. The building is now a meeting place for naturalist groups.

Mercer inherited his wealth from his aunt, Elizabeth Chapman Lawrence, when he was 51 years old, and he spent four years building this home, which is truly a castle. We entered through a dark room just before the lighter, larger room, which Mercer intended to intensify one’s visual impression of the carved cement decorations that mimic the hand-made tiles in other rooms and is reminiscent of his travels to the Yucatan in Mexico, where he loved the natural tunnels. Crawford explained the many collections and the history and intention of each room, all decorated with beautiful tiles from his factory.

He had 6,000 books and said he had studied all of them to create his buildings and clay tiles. The tiles have ceramic relief decoration that depicts history, mythology, legends and scenes of many places. He was influenced by the stove plates in Bethlehem, Pennsylvania, in the Moravian Seminary and created the molds for his tiles after he learned the techniques.

Mercer spoke English, Greek, Latin, Italian and French and drew from each of these cultures. Before the castle was built, he constructed clay models of each of the rooms and then fitted them together like a 3D puzzle.

It required 10 to 12 men working for $1.75 a day for four years to build the castle. Lucy, a beloved horse who was a vital member of the workforce, received the same wage. The second Lucy is commemorated in a weathervane on top of one wing of the castle. Mercer moved into his home in 1912.

There are 200 windows, 66 keyed doors, 32 stairs, 18 fireplaces and 10 bathrooms. The house is all cement with a fireproof roof. It incorporates the poetry of the past with the inventiveness of the time in which it was built.

His housekeeper, Mrs. Swain, lived in the castle during Mercer’s life, and at his death he bequeathed the castle to her and her husband, who had worked in the tile factory. At their deaths the castle became a landmark owned by Doylestown.