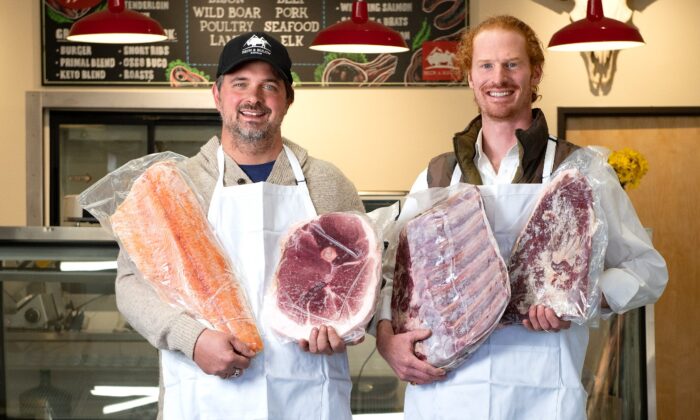 Tony Beck (L) and JP Bulow, the duo behind Beck & Bulow, show off wild provisions from their butcher shop in Santa Fe, New Mexico. They formed a friendship, and eventually a business partnership, based on their shared spirituality and lifelong interest in Native American culture. (Douglas Merriam)
Food & Dining

A Butcher Shop With Wild Dreams

Linda Joyce Forristal
Linda Joyce Forristal, or Mother Linda, as her friends call her, is a former food and travel editor in Washington, D.C. She lives on the Eastern Shore of Maryland and is a professor of tourism and hospitality. To see more of her food and travel interests, cruise over to MotherLindas.com
View profile
Follow
biggersmaller
Print

If you wander into Beck & Bulow, an unassuming butcher shop under a red awning on Cerrillos Road in Santa Fe, New Mexico, you might find yourself standing side-by-side with Hollywood A-listers (or their chefs) and a cowboy buying a tomahawk. That’s not the iconic war axe of some indigenous North American tribes, but rather a 32-ounce bison ribeye steak, a thick, buttery-rich slab with the long rib bone still attached. In addition to tomahawks, walk-in customers will find a wide range of frozen bison and other wild meats in freezers next to ones full of wild Alaskan seafood. The butcher on duty is ready to provide fresh cuts to both wholesale and retail customers.

The current success of Beck & Bulow, purveyors of bison and other sustainable, ethically sourced meats, was built on quick thinking, a bit of serendipity, and a lot of hard work.

The two founders, Tony Beck and JP Bulow, met by chance at a Lakota sweat lodge in Albuquerque several years ago. They formed a friendship, and eventually a business partnership, based on their shared spirituality and lifelong interest in Native American culture.

“I was struck that in the Lakota language, Wakan Tanka, the words for ‘sacred’ or ‘divine spirit’ are very similar to Tatanka, the Lakota word for bison,” said Beck. Since the Plains tribes used every part of the animal for their food, clothing, and shelter, it’s no wonder they considered the bison sacred, and that their futures and fortunes were intertwined.

Call of the Wild Bison

At one time, 60 million bison freely roamed the Great Bison Belt of North America, a wide swath of land that ranged from Alaska to the Gulf of Mexico and as far east as the Atlantic Seaboard. Bison migrated up and down the landscape, especially the Great Plains, in search of the various grasses that sustained them. Unfortunately, the introduction of livestock, the construction of fences by ranchers, and the deliberate overhunting of the bison almost led to the herd’s extinction in the 1800s.

“The United States government instituted a policy to kill the bison, which were like a walking Walmart, in an effort to eliminate the Lakota,” Beck said. The species was only saved because Blackfoot Indians smuggled 100 heads or so into Canada, where they were spared and eventually served as the genetic stock to repopulate the species. Today, many conservation groups and ranchers are working to restore the herd to a sustainable level of around 1 million.

The bison business fell into Beck and Bulow’s laps when they took the step to source good-quality bison, ones that were not commercially raised or processed, for the Native American ceremonies they were attending. In that search, they eventually connected with a third-generation rancher from South Dakota who was raising bison on 20,000 acres south of Madrid, New Mexico. They learned he was looking for someone younger to take over. Beck had a background in real estate and teaching yoga, and Bulow in selling specialty and natural foods, and they both felt called in this new direction. So began their journey to becoming bison entrepreneurs.

Today, their herd roams free on the Madrid ranch, as well as on 5,000 acres along the Gallinas River in San Miguel County, just east of the Sangre de Cristo Mountains. The San Miguel land is home to several sacred kivas—chambers wholly or partly underground, in which many of the religious ceremonials of the Pueblo Indians were performed—and a bison hunting pit. Beck and Bulow consider the whole area to be sacred ground. The massive, noble animals graze and forage on the prairie grasses and sedges, are grass-finished—instead of grain-finished with corn, which changes the flavor—and never administered hormones, steroids, or antibiotics.

Beck and Bulow started their business in 2018, first selling at local farmers markets in the Santa Fe area, and then adding a warehouse a year later. Their bison tenderloins and rib eyes put them on the map, but they also offered ground bison and other cuts and cures, including short ribs, osso buco (which is great for nutritious bone broths), tongue, and smoked sausages. They expanded into selling to local restaurants in Santa Fe, including La Plazuela in the famous La Fonda hotel, off the town’s main square. As word got out, they started selling to a few online consumers.

The quick-thinking part of their success happened at the beginning of the pandemic.

“The mayor of Santa Fe sees us as a COVID-19 success story,” said Beck. How did they thrive when so many other small businesses were closing? They aggressively expanded, while everyone else was contracting. As Beck explained, “There is an equal and opposite opportunity during the time of a calamity, and we had faith in the future.”

Hard work, including many 18-hour days, went into opening a combined retail storefront and butcher shop and updating the warehouse and website for nationwide delivery. They also commissioned two full-length murals by artist Sebastian “Vela” Velazquez, featuring American wildlife species, to grace the outside of the butcher shop and beckon all to enter.

Although it was a big risk to expand during the pandemic, “the grand opening of the butcher shop in March 2021 was a phenomenal success,” Bulow said.

As the business expanded, they also diversified their product line. They first added free-range elk and wild boar, then free-range beef and lamb, and finally, heritage pork and humanely raised poultry, all of which are sourced from small family ranches. One of their all-time best-sellers is nitrate-free wild boar bacon seasoned with celery salt.

In addition to American bison, Beck and Bulow are passionate about conserving other keystone species that play an irreplaceable role in sustaining their ecosystems. In the sea, that includes wild Pacific salmon: A report by the Wild Salmon Center in Portland, Oregon, found that 137 wildlife species depend on wild salmon due to its vital role in numerous food webs and overall watershed health.

Additionally, wild salmon has symbolic, mythic, and ceremonial importance among Native American tribes in the Pacific Northwest. This interdependence shapes the laws around their capture. For example, “by law,” said Bulow, “all five indigenous wild Alaskan salmon species—king, silver, sockeye, pink, and chum—must have already spawned before the commercial catch, ensuring sustainability and the next generation. You can confidently eat wild salmon every day of your life, and if it comes from Alaska, it will be there—into perpetuity.”

It’s no surprise that a recent addition to Beck & Bulow’s product line is wild salmon, as well as other Alaskan seafood species, including halibut and sablefish. In September, they expanded onto Kodiak Island, the source of their pristine Alaskan seafood, when they purchased facilities right on the docks. This second location includes a 7,500-square-foot production facility with cold storage and full processing capabilities, which means that their Alaskan seafood line is now vertically integrated—that is, they control the supply chain from the ocean to their customers. By putting down roots in Alaska, they’re now also able to source seafood from fishermen they know by name. Back on shore, the fish is individually quick-frozen (IQF) and shipped to Santa Fe to sell year-round to their growing list of customers.

In just four short years, with a pandemic in the middle, this dynamic duo has created an amazing company, but they aren’t sitting on their laurels. They’re now focused on online expansion, which includes the acquisition of a bigger warehouse in Santa Fe to better serve their customers.

But their deeper goal goes beyond sales: “We want to introduce ancient bison and Alaskan salmon to the mainstream American palate,” said Beck.

“And remember,” Bulow chimed in, “the more we eat our indigenous meats, the more they will be sustained. And what better way to buy American?”

Combine the ground bison with the ground wild boar and make 12 patties.

Cook the burgers either on the grill or the stovetop. If cooking on the stove, use some bison tallow or other oil to grease the skillet. Cook over medium-high heat for 3 to 5 minutes per side on the grill, or 2 to 4 minutes on the stovetop, depending on the thickness of your burgers. Add the slices of cheese during the last 2 minutes of cooking so that it melts on top of the burgers. You can close the cover on the grill or put a lid over the pan to encourage the cheese to melt. Set the cooked burgers aside to rest.

Fry the eggs on the stovetop to your preferred level of doneness. Carefully set an egg on top of each burger.

Toast the brioche buns, either under the broiler or on the grill.

Remove the buns from the heat and assemble your burgers. Enjoy!