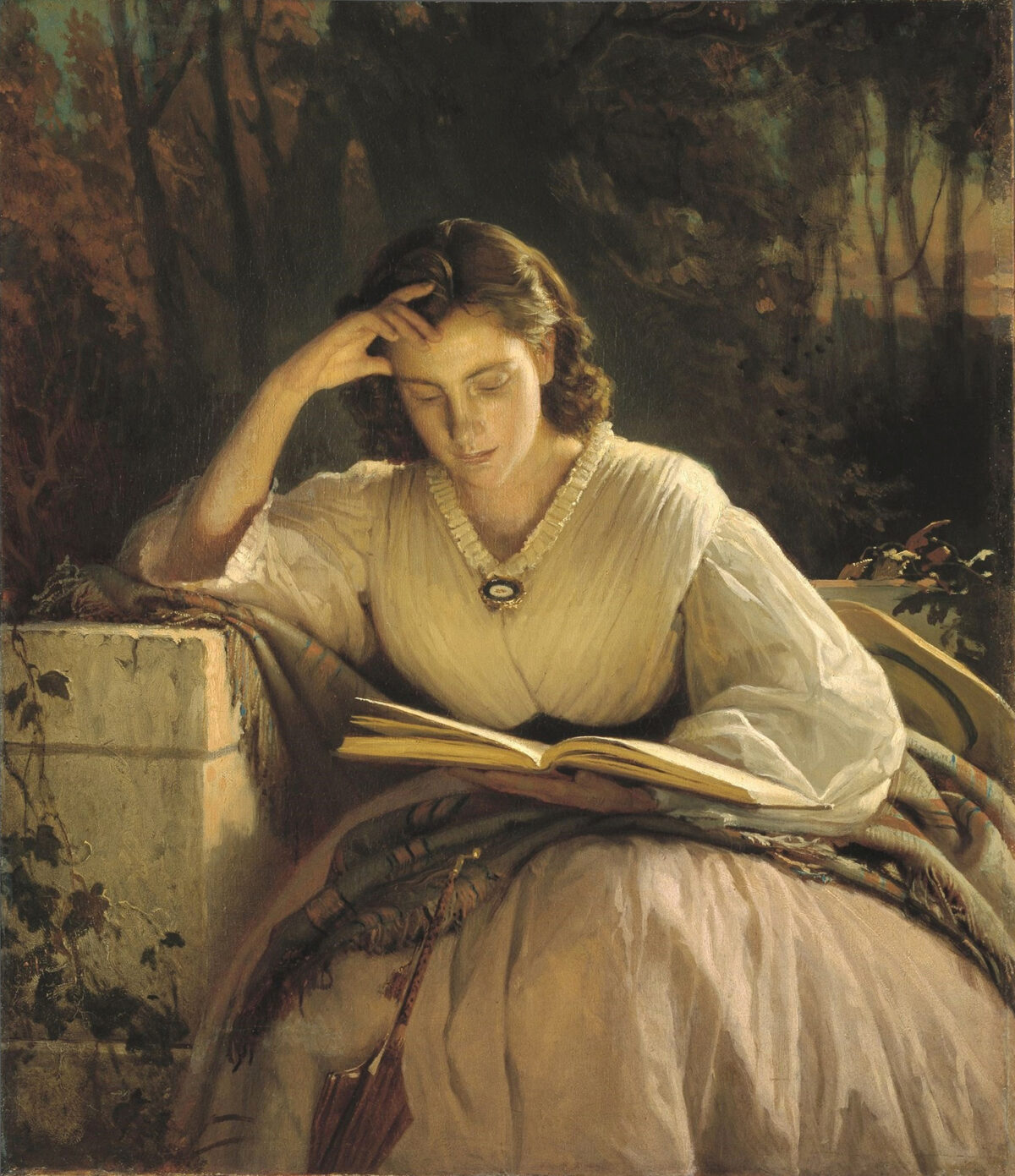 “She was the Jane Austen of the essay. That she is not so recognized is a great—and, one hopes, temporary—loss.” So wrote John Lukacs, biographer and university professor, of Agnes Repplier more than 40 years ago when he compared the style and grace of Repplier’s prose to that of Austen. Alas, that loss appears to be permanent. Who these days has heard of Agnes Repplier (pronounced Rep-LEER), much less read her work? Not I.

Though I had come across her name in some obscure books, I first met Miss Repplier just a few weeks ago in the library of Christendom College here in Front Royal, Virginia. It’s summertime and, with the students having departed, the library is generally as quiet as a tomb.

From time to time, I go there to bask in the stillness and work on my laptop. On this particular occasion, I got up to stretch, wandered around the stacks a bit, and happened to see four volumes bearing the name Repplier. I pulled out Lukacs’s “American Austen: The Forgotten Writings of Agnes Repplier,” began reading his introduction, and was hooked.

Let me introduce you to this new acquaintance.

Agnes Repplier (1855–1950) was born in Philadelphia and made that city her home for the rest of her life. She was a strong-willed child, and that child lived on in the adult. She rebutted the attempts by her mother to teach her to read and acquired that skill by teaching herself at age 10.

She was dismissed from two schools for her rebellious behavior, in one case throwing a book on the floor at the feet of her teacher after declaring that it was “stupid.”

After leaving that second school, the West Penn Square Seminary for Young Ladies, Repplier entered the most difficult stage of her life. Though her relationship with her mother was often tempestuous, Mrs. Repplier recognized her daughter’s gift for words and put her to work writing stories to help the family through the hard times on which they had fallen.

Through her late teens and into her 20s, she managed to bring in small amounts of cash from these stories. After her mother died, she and her sister Mary, a teacher, found themselves caring for their sickly father and their brother, a partial paraplegic.

Of her early stories, Repplier wrote: “They get themselves published somewhere, somehow, and bring in a little money. Otherwise they would have no excuse for being; a depressing circumstance of which I am well aware.”

But all of that was about to change.

An Essayist Is Born

In July 1884, Repplier spoke with Father Isaac Hecker, the founder of the Paulist order and publisher of Catholic World magazine. Though he had accepted several of her stories, he found her fiction flat and without any real spark. “I fancy that you know more about books than you do about life,” he told her, “that you are more a reader than an observer.” He advised her to write an essay on John Ruskin, one of her favorite authors, and as Repplier later reported, “That essay turned my feet into the path which I have trodden laboriously ever since.”

For more than 60 years, Repplier entertained and enlightened readers with her essays, publishing more than 400 of them in magazines and newspapers, and collecting them in more than a score of books. Her writing appeared in prestigious publications like The Atlantic, and as Lukacs tells us, “Every man and woman of letters in the English-speaking world learned her name.”

Though she enjoyed the company of men, often corresponding with them or entertaining them in her home, Repplier never married. Despite her lectures and the great pleasure she took from conversation, she remained alone, writing essay after essay until extreme old age forced her to put down her pen.

Her Talents and Gifts

As we become better acquainted with this remarkable writer, we see that Repplier brought together several ingredients that help explain her prowess as an essayist.

The lifelong joy she took from reading, particularly English and French writers, provided gold and silver for her writing. Again and again in her essays, even the nonliterary ones, Repplier brought into play authors and historical figures, some of whom are largely unknown to today’s readers. In “Town and Suburb,” for instance, she presents us with Cobbett, Blake, Charles I, Dickens, Will Rogers, Walter Lippmann, Browning, and Dr. Johnson, among others.

Equally important was her craftsmanship, developed in part, no doubt, during those years spent in the literary wilderness composing stories. “For every sentence that may be penned or spoken,” she once wrote, “the right words exist.”

Add to these tools a subtle humor, wide-eyed honesty, and sophistication, and you have Agnes Repplier, essayist extraordinaire.

In a collection of her online quotations, we find such jewels as these: “Conversation between Adam and Eve must have been difficult at times because they had nobody to talk about,” “It is not easy to find happiness in ourselves, and it is not possible to find it elsewhere,” and “There are few nudities so objectionable as the naked truth.”

Like her contemporary G.K. Chesterton, now read more for his novels than his essays, Repplier can startle readers by paradox or some barbed witticism.

In “Ennui,” for instance, she ends with a comment pertinent to today, one that will make some of us smile and nod in recognition: In it, she mentions “… the sanguine socialist of today, who dreams of preparing for all of us a lifetime of unbroken ennui.” In her collection “Points of Friction,” writing of the tyranny of a proletariat, she remarks, “It is as revolting to be robbed by a reformer as by a trust.”

In reading Repplier, who was a lifelong amateur historian, we also learn a great deal about the past. Though I have some acquaintance with European history, Scanderbeg was a name entirely unfamiliar to me. In “Points of View,” Repplier devotes an essay to this hero who was once a captive of the Turks, escaped, and for decades led the Albanian resistance to Turkish incursions.

Her account of this man and the wars, intrigues, and dangers he faced are enlivened by her narrative skills and vivid descriptions. She demonstrates a solid grasp of little-known history along with the ability to bring it to life on the page.

It shouldn’t surprise us to find that Repplier is today a forgotten literary figure. In comparing her to many essayists today, readers would likely find her style a bit starchy and stiff. Some of her references to books and authors might be confusing as these writers are also not read today. And essays in general, including some of Repplier’s, are often topical; they are focused on current events of little interest today to anyone other than historians.

Finally, the general sweep of time itself often washes away the culture of the past. Most Americans still recognize the names of literary celebrities like Ernest Hemingway or F. Scott Fitzgerald, but far fewer remember bestselling authors like James Jones or Mary McCarthy, much less once well-known journalists and essayists whose words were generally writ on sand.

I read plenty of essays these days. It’s my favorite genre: some of them online, some in books, and a few of them make more than a cursory impression. From Montaigne, father of the modern essay and still in print today, to writers like Joseph Epstein and Alice Thomas Ellis, I’ve taken valuable knowledge and guidance.

Bits and pieces of what they’ve shared in print have stuck with me, causing me to return from time to time to refresh myself at their wellspring of words.

As for Agnes Repplier, I am pleased to have made her acquaintance. Her grace, style, and subjects take me away from the crudities that so often manifest themselves in our age. Reading her, I feel as if I’m a kid again, listening to the stories and observations of an old maiden aunt. For a while, that gentle, wise, and humorous voice whisks me off to that most foreign place on earth: the past.

“If the unresponsive gods, so often invoked, so seldom complaisant, would grant me one sweet boon, I should ask of them that I might join that little band of authors, who, unknown to the wide careless world, remain from generation to generation the friends of a few fortunate readers.”

As one of her friends (I’m sure she has others), I believe her wish came true.