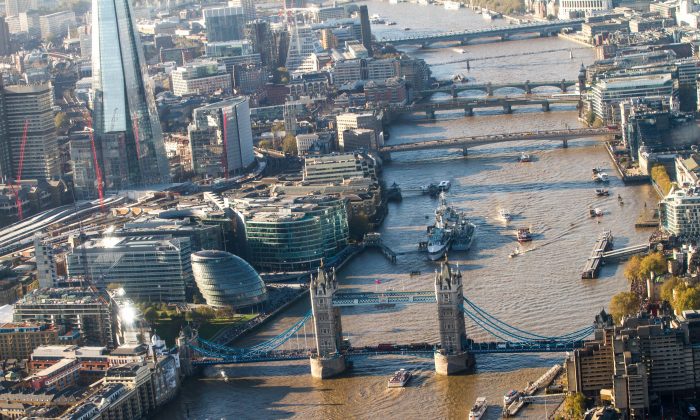 The River Thames, with Tower Bridge in the foreground. The round, slanted building on the left of the river is City Hall. (Mohammad Reza Amirinia)
Destinations

Flying over London in a helicopter was unlike any other experience I’ve ever had. Exploring this amazing city from the skies may not be at the top of many visitors’ must-do list, but I highly recommend it.

I’ve lived in London for a long time, but if someone asked me how much I know about it my answer would have to be, not enough. A city that grew from several small villages around a river in Roman times is now a complex cosmopolitan urban centre. Beneath the surface of this busy, vibrant, and modern capital there are hidden mysteries behind its public squares, cobbled alleys, lazy canals, and centuries-old buildings.

My first serious exploration of London happened when I worked on a project with 29 other people—a “loose traverse” from St. Paul to Green Park to record our observations, which I did largely through the lens of my camera. The camera helped me focus on things I would normally have ignored. Exploring the narrow alleys and steep streets, the hidden courtyards and fountain squares, and marveling at the stunning architecture, I witnessed the true power of London.

But flying over the city gave yet another perspective. My first helicopter flight over London was a surprise birthday gift from my children. Departing from Redhill in Surrey, it took only five minutes to pass over the green countryside of Surrey and Kent and the velvet carpeted farmlands of South London before reaching the River Thames and the urban jungle.

It was thrilling to view London and all its famous landmarks from above. I enjoyed my aerial exploration so much that I wanted to repeat it. So on a sunny November Sunday, my wife and I headed for The London Helicopter in Battersea, the only heliport in central London.

We climbed into a six-passenger helicopter plus pilot and, with each of us wearing lifejackets and headphones, we rose smoothly in our enclosed glass cabin.

On the South Bank, the London Eye—Europe’s tallest Ferris wheel—looked like a toy carousel.

We took much the same route Vincent Lunardi took some 230 years ago when he embarked on his historic balloon flight from Moorfields in 1784, accompanied by a cat, a dog, and a pigeon. It was the first manned flight over Britain and marked the beginning of a new era.

We soared over the Thames, following this famous waterway’s snaking route through the heart of the city. From 1,200 feet up, the city took on an angular appearance. Objects attenuated gradually as we went higher and higher.

The rail lines leading from major stations such as Victoria, Waterloo, and Clapham Junction spread out like a giant tentacles. Construction workers on skyscrapers in various stages of being built moved like ants along huge columns of steel.

We flew over Kew Gardens, Hyde Park, the Oval Cricket Ground, then Westminster Abbey, the Houses of Parliament and Big Ben, and Westminster Bridge. On the south bank of the Thames, the London Eye—Europe’s tallest Ferris wheel—looked like a toy carousel.

Then the Royal Festival Hall, the British Film Institute, and the National Theatre came into view, as well as Buckingham Palace and Green Park. The Shard, a 95-storey skyscraper and London’s newest and tallest landmark, seemed to be just beneath our feet as we flew toward London Bridge, the Tower of London, and Tower Bridge.

My sense of the energy of the city grew as we hovered near the Cutty Sark, the world’s sole surviving tea clipper, and Greenwich Park, home to the outstanding 17th-century Royal Observatory. The pilot then made a turn around the Isle of Dogs and the Canary Wharf financial district, with a distant view of the white dome of the O2 Centre and Olympic Park.

We turned back to base after a captivating 18-minute aerial tour. At £199 (C$320) it might be considered a bit of a splurge, but it’s worth it simply to be able to observe what you couldn’t from the confines of the ground and to get your own bird’s eye view of this iconic city.

The company also offers helicopter flights from its base at Redhill Aerodrome near Gatwick Airport in Surrey.